The Ultimate Guide to Demodex Blepharitis 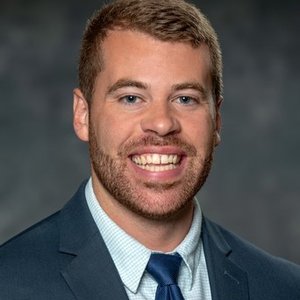 By properly identifying and diagnosing Demodex blepharitis, you will be able to treat the underlying cause of several ocular surface disorders triggered by mite infestation. Learn everything you need to know about this complex condition. 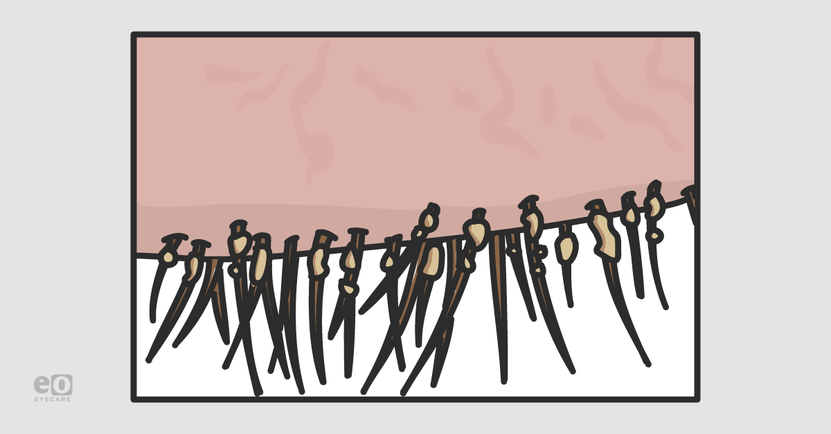 Blepharitis is a common condition encountered by eyecare providers, with over 2 million cases reported annually in the US.1-4 Typically, the condition is caused by bacterial overgrowth or allergies and responds well to routinely used treatments, such as antibiotics. However, in some cases, patients do not respond to standard treatments leading to persistent irritation and ocular symptoms.

In such cases, other potential causes should be explored, and one of the top suspects should be the parasitic mite—Demodex. Demodex are ectoparasitic mites that live on human skin and are found in hair follicles and sebaceous glands as part of the skin’s natural microflora.5,6 However, when the mites overpopulate, their presence can lead to Demodex blepharitis (DB) as well as several other ocular maladies including meibomian gland dysfunction (MGD), conjunctivitis, keratitis, and eyelash disruptions.5,7-13

“This makes properly identifying an overgrowth of Demodex and appropriately treating the condition vital to successfully managing stubborn cases of ocular surface disease.”

Though blepharitis is common, Demodex as a causative organism is often overlooked. While traditionally about half of cases of blepharitis (equaling nearly 9 million) have been recognized as DB1-4, this may be a gross underestimate as recent studies have found that about 58% of all patients presenting to eye clinics for any reason show signs of DB, which pushes the number of estimated cases in the US to roughly 25 million.14-16

When the total patient population displaying signs of DB was broken down into specific groups, it was found that 1.2 million were dry eye patients currently using a prescription medication to treat their condition, 2.3 million were contact lens intolerant patients, and 2.2 million patients had cataracts.14-16 These numbers are particularly important considering these are groups where ocular surface health is crucial, whether they are suffering from chronic ocular surface irritation, desiring but unable to wear contact lenses, or about to undergo cataract surgery and a healthy ocular surface is critical to obtaining reliable preoperative measurements to ensure the best post-operative refractive outcome.

Additionally, DB can have a significant effect on quality of life with nearly 80% of DB patients reporting negative consequences of the condition.17 The majority of patients suffering from DB reported ocular irritation for over 4 years.18 In addition to discomfort, patients reported cosmetic concerns, such as redness and challenges wearing makeup, and functional issues, like difficulty with nighttime driving.17

Despite all the negative effects of Demodex infestation on ocular surface health and function, DB still remains underdiagnosed as a recent study showed that 58% of patients presenting with signs and symptoms of Demodex never received a diagnosis of DB.18 This underscores the need for all eyecare providers (ECPs) to carefully look for this condition in our patients to prevent cases of DB from going unresolved.

Who is at risk for Demodex blepharitis?

Demodex are a normal part of our skin’s microflora so everyone, at some point in their lives, will exhibit Demodex.5,6,19 There are conflicting data regarding whether Demodex are more common in males or females with differing studies finding the mite to be more prevalent in females,20-22 more prevalent in males,23-25 or finding no difference between sexes.26,27 Demodex are observed in all races.26

However, the density of Demodex is highly correlated to age, as Demodex are present in 84% of the population by age 60 and 100% of the population at 70 and older.19 As Demodex increase with age, they are less common in the pediatric population with most pediatric cases involving immunocompromised individuals, although, rarely, Demodex can occur in healthy pediatric patients as well.28

Similarly, Demodex tend to be found in immunocompromised individuals in general including those with condition such as cancer or HIV or individuals undergoing immunosuppressive therapy.7,29 Other factors that increase risk for Demodex infestation include rosacea, fair skin complexion, diet (consumption of spicy foods, alcohol, and hot beverages), emotional state (stress), environmental conditions (sunlight exposure, sudden temperature changes), and smoking.5,30,31

Interestingly, many of these risk factors are also triggers for rosacea, which has a high correlation with Demodex infestation, with Demodex overpopulation even being proposed as the underlying etiology of rosacea.9,32-36

It is important to note, however, that the presence of Demodex does not necessarily mean an individual will experience any ocular symptoms. In fact, many individuals displaying signs of Demodex are asymptomatic.37,38

Additionally, it has been debated whether the presence of Demodex is beneficial or detrimental.8 It has been proposed that Demodex may be helpful by blocking overgrowth of other more harmful microbes such as certain bacteria and other mites.11 However, it is thought that when the density of Demodex becomes too great, this overpopulation upsets the natural homeostatic balance of the environment of the lids and lashes leading to an infestation of Demodex referred to as demodicosis.5,7-13

Once demodicosis has occurred, patients are at risk for negative ocular manifestations such as DB, MGD, conjunctivitis, keratitis, and eyelash disruptions. The exact tipping point between normal Demodex presence and overpopulation is not known, so standard criteria for what constitutes demodicosis has not been explicitly established.7,8 However, it has been shown that 100% of patients displaying cylindrical dandruff or collarettes at the base of the eyelashes have DB, to the extent that lash collarettes are considered pathognomonic for the condition.11,16,39

While this finding does not determine the exact extent of Demodex infestation or if a patient is symptomatic, it can be a useful sign for identifying a patient at risk of having or developing symptomatic DB.

As seen in Figure 1, Demodex blepharitis is caused by an overpopulation of Demodex mites resulting in a disruption of the lids, lashes, and ocular surface. 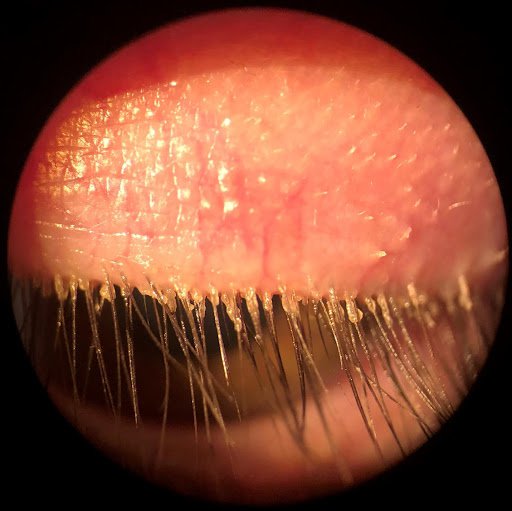 Demodex are ectoparasitic mites that live on human skin and are part of our natural microflora.5,6 They are arthropods with three body segments and have a cigar-like shape with four pairs of legs with clawed ends and pincer-like mouth pieces40,41 that make the mites adept at gripping cylindrical structures, such as eye lashes, and burrowing into glands and follicles.10,11

“Humans are host to two species of Demodex: Demodex folliculorum and Demodex brevis.”

While there are many species of Demodex found across mammals, these are the only two found in humans and are the only ones that affect the eye.7 The two mites also occupy separate niches, with D. folliculorum (the larger species at 0.3-0.4 mm in length) found on the lashes and lash follicles, and D. brevis (the smaller species at 0.2-0.3 mm in length) inhabiting sebaceous glands.5,13,42-45

Although they occupy different areas, D. folliculorum and D. brevis are often found together.23,24,46 The mites can also be found on the skin of the cheeks, nose, forehead, and in the eyebrows as well.5,19,47,48 The mites feed on epithelial cells and sebum found where they reside,5,10,11,40 however they lack a fully formed digestive system so they must regurgitate all undigested material with this physiology leading to a relatively short life span.40,49

Demodex mate in the openings of hair follicles and lay their eggs in either hair follicles or sebaceous glands, where it takes about 2 weeks for the eggs to develop into a larval stage.5,40,45 The adult mites then live an additional week giving Demodex a typical lifespan of about 3 weeks.5,45