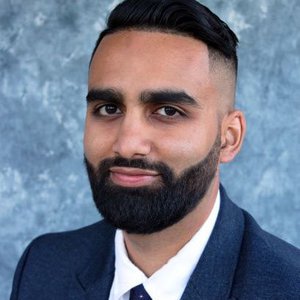 Distinguishing and diagnosing lesions represents a diagnostic challenge for eyecare providers. Expand your knowledge on the differential diagnoses and management of some of the more common pigmented lesions encountered on routine clinical examination. 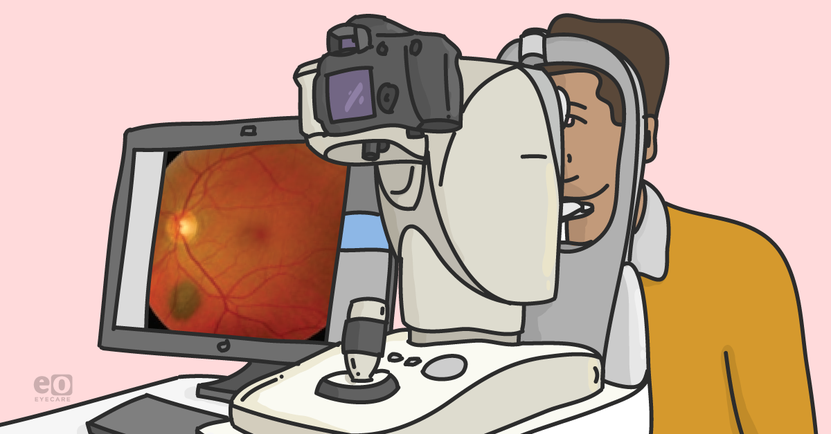 Pigmented fundus lesions are commonly encountered on routine ophthalmological dilated examinations and may be sent to your practice for further evaluation after being identified by another health care professional. Pigmented lesions may represent a benign or malignant process. They can be congenital, acquired, or the result of an infectious or inflammatory process affecting the retinal pigment epithelium (RPE), the layer that provides the natural pigmentation of the fundus.

Generally, outside of congenital lesions, pigmented lesions tend to be seen more in the elderly population (over 40), with a split prevalence among males and females. Prevalence rates vary from 0.2 to 30% for choroidal nevi.1-3

Some lesions have discrete focal patterns, while others may be more diffuse; various lesions have a predisposition for specific ethnic groups, and others may occur due to different environmental exposures. Sometimes a combination of factors may lead to the development of a pigmented lesion.

RPE cells contain melanosomes of neuroectodermal origin that develop during the second trimester of development. RPE cells transport nutrients, ions, and water, phagocytose the outer rods and cones, maintain the blood-ocular border, metabolize vitamin A, secrete factors essential to the integrity of the retina structurally, convert all-trans-retinal into 11-cis retinal, and absorb light with protection against photooxidation.4

Disruptions of the RPE layer may lead to:

Most pigmented lesions are asymptomatic and discovered incidentally during routine eye exams; however, some may present with symptoms ranging from floaters, field loss, photopsias, reduced visual acuity, and pain. While some lesions may be harmless, others may be sight or even life-threatening.

Distinguishing and diagnosing lesions represents a diagnostic challenge for eyecare providers. Some studies reveal as low as a third of new intraocular tumor patients referred to tertiary ocular oncology care centers are sent with the correct diagnosis.5 In this overview, we will discuss the differential diagnoses and the management of some of the more common pigmented lesions encountered on routine clinical examination.

Congenital hypertrophy of retinal pigment epithelium (CHRPE) represents an asymptomatic solitary, flat, and well-demarcated pigmented lesion whose shape may be round, elliptical, or irregular. These lesions may also contain non-pigmented areas within called "lacunae" and non-pigmented lines at the lesional margins ("halo"). Additionally, there may be overlying retinal vessel abnormalities such as vascular sheathing and attenuation.

As the name suggests, CHRPE occurs secondary to hypertrophy and hyperpigmentation of the RPE layer. CHRPE lesions should be classified as typical or atypical.

Typical lesions are often round and solitary as described above and may even feature enlargement of the lacunae over time. Typical CHRPE lesions can sometimes have a "bear track" appearance when multiple small lesions are seen in a cluster pattern.

Atypical lesions include pigmented RPE lesions that are pisciform or spindle-shaped, bilateral, and multiple in number. Atypical presentations of CHRPE may represent a higher predisposition for familial adenomatous polyposis (FAP), a risk factor for developing colon cancer. 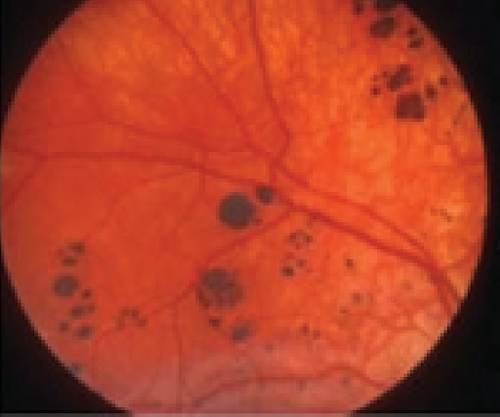 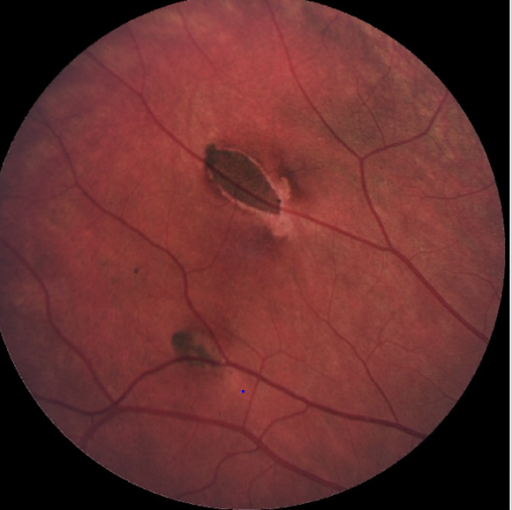 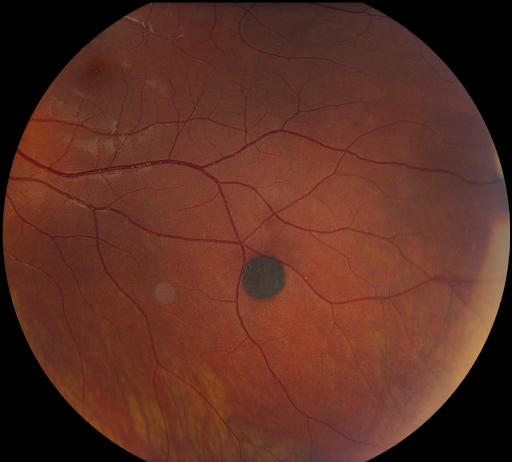 On OCT, CHRPE appears as a thicker, brighter RPE band with overlying disruption (sometimes absence) of the outer nuclear layer and ellipsoid zone (see Figure 4 below). 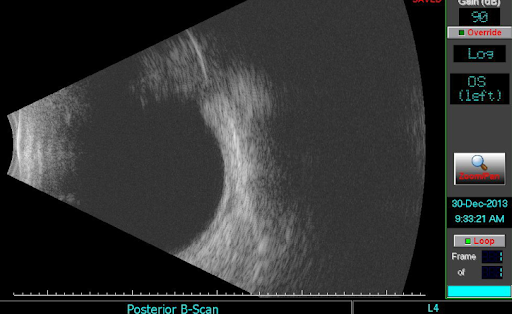 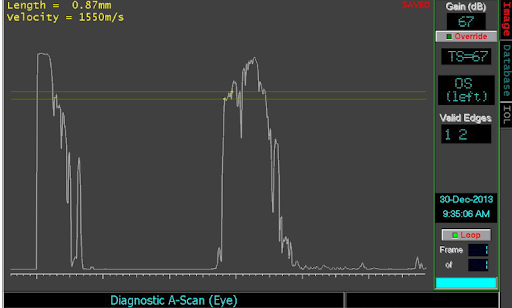 RPE hyperplasia occurs when there is a non-specific proliferation of RPE cells that forms an irregular-shaped pigmented retinal lesion sometimes secondary to inflammation, trauma, vitreous traction, or therapeutic interventions.

In Figure 7, RPE hyperplasia is represented. 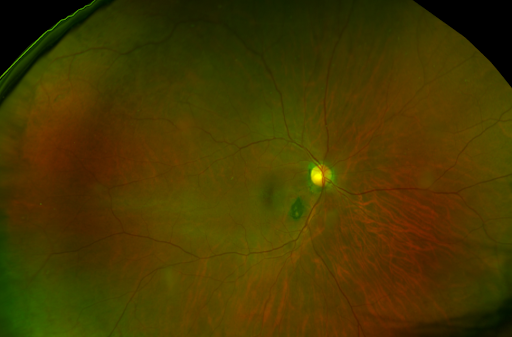 Often smaller areas of RPE hyperplasia are described as "pigment clumping." Pigment clumping in the macula (see Figure 8 below) is one of several characteristics of dry age-related macular degeneration discussed later in this paper.

Choroidal nevi are benign, often asymptomatic pigmented lesions typically round with well-defined borders. Reported incidence has been highly variable from 0.2 to 30%, with higher rates reported in lighter pigmented individuals.3

Typically, nevi are without subretinal fluid or orange pigment, do not juxtapose the optic nerve, include overlying drusen, and are no thicker than 1.0 mm. Atypical nevi may have ill-defined borders and appear less uniform with less pigmentation. Nevi should be serially documented and objectively photographed and measured with B-Scan ultrasound to monitor features such as size (i.e., diameter and depth) and internal reflectivity over time.

Progression in size, new development of subretinal fluid or orange pigment should prompt a re-evaluation of the diagnosis. Malignant transformation of choroidal nevi to melanoma is rare, with estimates as low as 1 of every 8000.6 Other imaging modalities may help diagnose nevi as well, including fluorescein angiography in which nevi remains hyperfluorescent, or OCT in which nevi may be associated with RPE atrophy, PR loss and IS/OS irregularity. On FAF, the nevus appears hypo autofluorescent.

Figure 9 of a typical choroidal nevus. 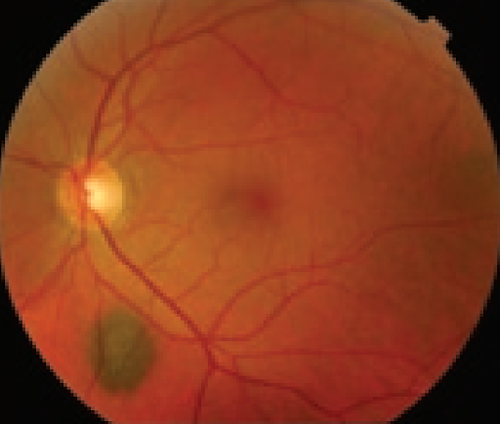 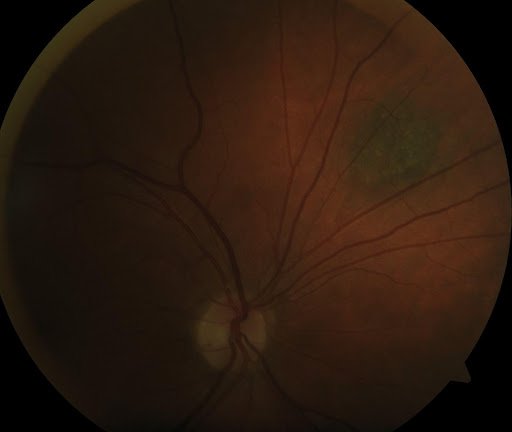 In Figure 11, OCT with enhanced depth imaging is able to highlight the posterior edge of the choroidal lesion. 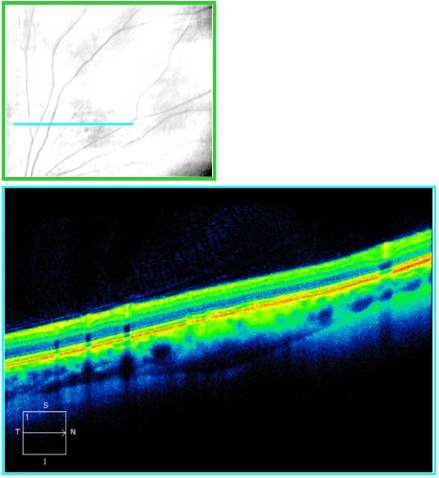 Refer to Figure 12 for atypical nevi with irregular borders and lighter pigmentation. 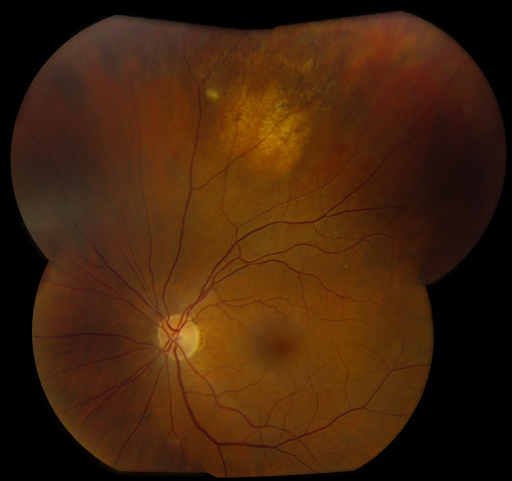 Choroidal melanoma is the most common primary intraocular malignancy in adults and the second most common intraocular tumor overall (after metastasis).3 They can present with photopsia, floaters, decreased vision, and visual field loss. In nearly a third of patients, choroidal melanoma is detected on routine screening before symptoms develop. Choroidal melanoma can sometimes be challenging to distinguish from nevi, especially when small in size; however, they are typically greater in thickness (>2.0 mm) and larger in diameter (> 4 disc diameters).

Other key features of choroidal melanoma include orange pigment, associated subretinal fluid, and growth over time. Larger choroidal melanomas have a distinct mushroom or dome shape and often have a concomitant exudative retinal detachment. Diffuse melanomas that are not as thick but have a broad base are often aggressive with extraocular extension. Dangerous characteristics can be represented by the "MOLES" system.

A MOLES score of greater than 2 represents a high sensitivity metric for malignancy. Genetic analysis and close observation are options in cases where diagnosis is equivocal. Treatment depends on the stage and grade of the tumor and is often multi-disciplinary, including brachytherapy, radiotherapy, laser therapy, enucleation, and surgical resection. The risk of recurrence and long-term complications from retinal detachment, macular edema, and neovascularization requires continued long-term surveillance 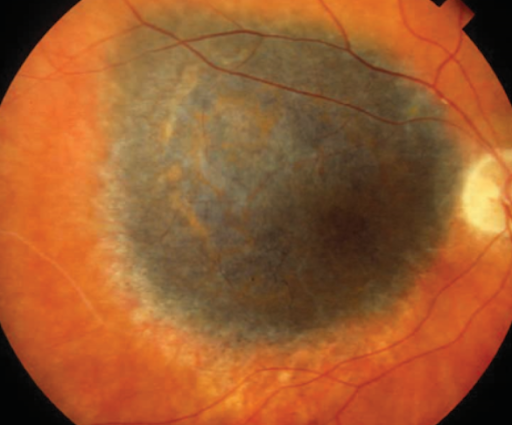 Figure 14 is a montage photo of choroidal melanoma. 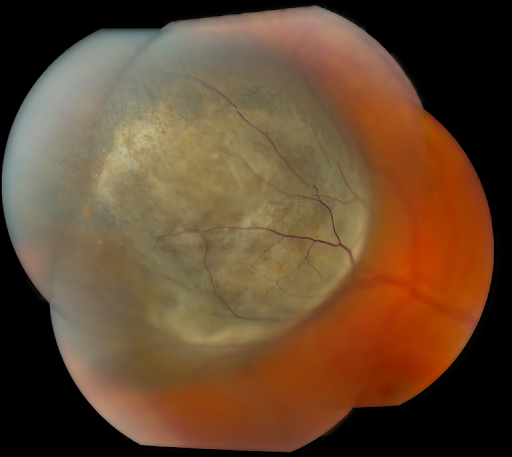 Lattice degeneration is also seen with hereditary vitreoretinopathies, such as Stickler and Wagner syndromes. The exact etiology is unclear and various theories exist, including developmental anomalies of the internal limiting membrane and secondary to retinal ischemia. The diagnosis can be made clinically, and on OCT imaging, there may be irregular surfaces and vitreoretinal adhesions with or without traction. 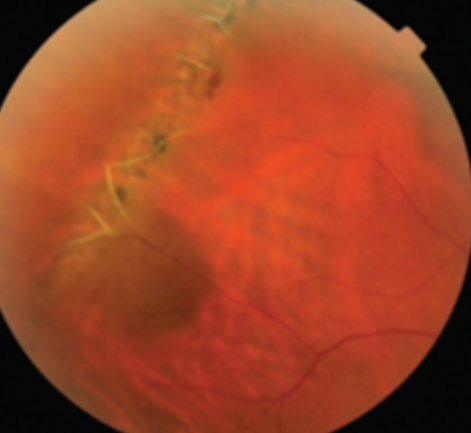 Melanocytomas are typically unilateral black lesions that commonly occur over the optic nerve and may extend into the choroid or neurosensory retina. They occur at similar frequencies across various ethnic groups and are slightly more prevalent in females. Melanocytomas are benign with a good prognosis. Severe visual disturbances are uncommon, but a quarter of patients may experience a mild degree of vision loss. Etiologies responsible for severe manifestations in the setting of melanocytoma include central retinal vein occlusions or malignant transformation.

An important differential diagnosis is uveal melanoma; however, uveal melanoma tends to occur more in lighter pigmented individuals while melanocytoma occurs equally in all ethnic groups. Other diagnoses to consider include optic nerve glioma, capillary hemangioma, and metastasis.

While the diagnosis is mainly clinical, imaging such as OCT of the retinal nerve fiber layer (RNFL) or B-scan ultrasound can be utilized to assess the risk of malignancy and to differentiate melanocytoma from other more sinister lesions. On B-scan ultrasound low internal reflectivity typically indicates a benign lesion.

Metastatic melanoma of the optic disk tends to grow more rapidly and diffusely, while choroidal melanoma invades the sensory retina. Imaging, as mentioned above, helps differentiate these lesions. 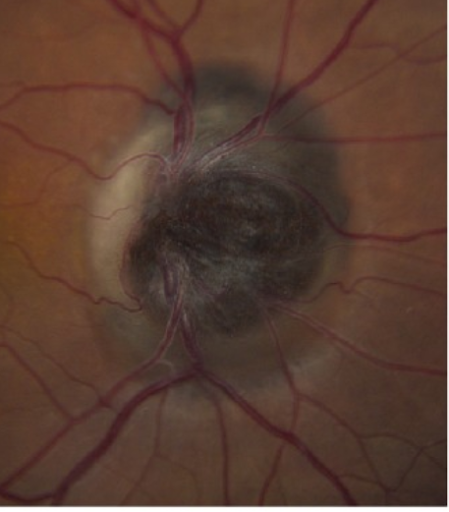 In Figure 17, small melanocytoma at the temporal disc with peripapillary laser scarring is represented. 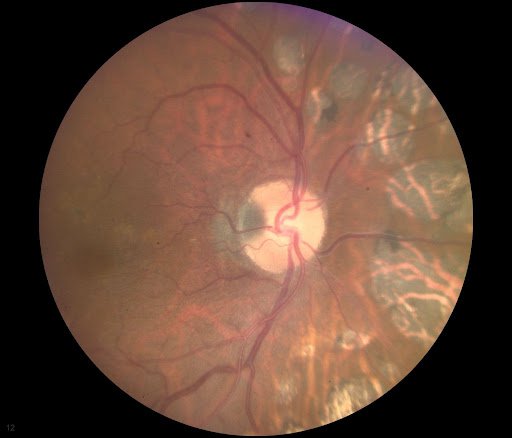 Choroidal rupture represents a break in the choriocapillaris, Bruch membrane, and RPE with an intact overlying neurosensory retina, usually occurring in the setting of trauma and closed globe injury. After the initial insult and hemorrhage clears, choroidal neovascularization (CNV) can develop with or without serous or hemorrhagic pigment epithelial detachments. Diagnosis made from a combination of history of closed globe injury with a crescent-shaped yellow/white subretinal streak that generally is near the disc.

Anti-VEGF therapy may be indicated if there is development of CNV Differential diagnosis of choroidal rupture include lacquer cracks in patients with high myopia and angioid streaks that emanate from the disc and are also associated with CNV, however, these are both often bilateral and do not typically have an associated history of trauma.

Refer to Figure 18, below, for an image of choroidal rupture (nasal macula) and choroidal nevi (inferonasal to nerve). 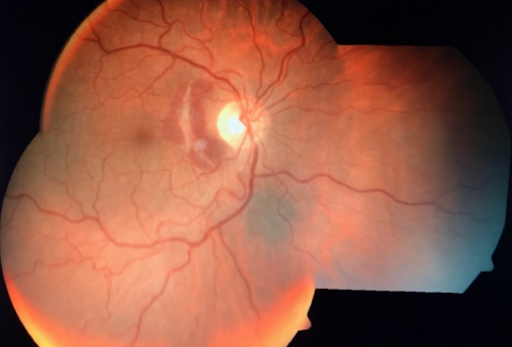 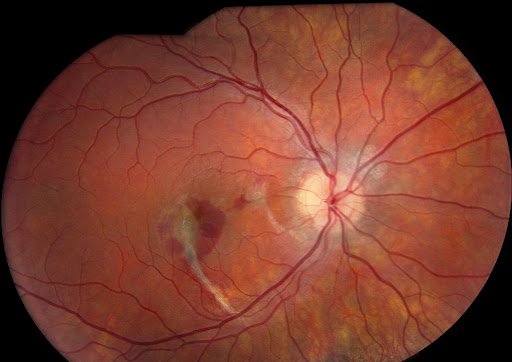 Toxoplasmosis classically presents as focal retinitis with overlying vitreous inflammation, described as "headlights in a fog," with a nearby pigmented chorioretinal scar. The differential for toxoplasmosis includes other infectious processes, including tuberculosis, toxocariasis, syphilis, cytomegalovirus, herpes simplex virus, varicella-zoster virus, and autoimmune processes, such as Behcet's disease and retinal vasculitis.

Lesions threatening the macula or optic nerve, causing visual impairment during pregnancy or in an immunocompromised host represent situations where treatment is indicated.

Treatment includes systemic antibiotics with trimethoprim/sulfamethoxazole (Bactrim), azithromycin, or clindamycin. Intravitreal antibiotics can also be considered. Outcomes largely depend on the location of the lesions and degree of inflammation. Lesions can relapse and reoccur; however, bilateral impairment is rare. 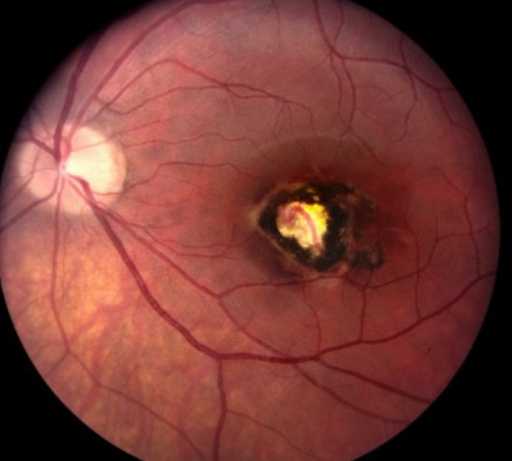 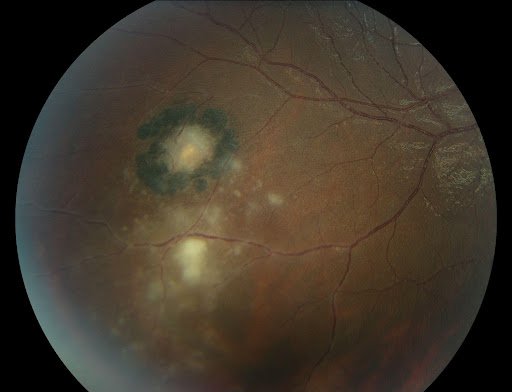 Metastatic processes can occur in any part of the eye, including the eyelid, conjunctiva, or orbit, and are the most common intraocular tumor. Whenever coming across a new pigmented lesion involving the choroid or retina, a thorough history of any prior history of malignancy should be reviewed, even if the malignancy is said to be in remission.

Breast cancer represents the most common primary tumor that can metastasize to the eye; however, metastasis can occur secondary to colon, renal, prostate, or skin tumors.10 The majority of patients with breast cancer metastasis have a known diagnosis of cancer; however, this rate is not as high as other cancers such as lung metastasis, where only around 66% of patients have a cancer diagnosis.11

When there is sufficient concern for metastasis to the eye without a known history of malignancy, further investigation should be done by the aid of the primary team (e.g., chest imaging, liver function tests, mammograms, colonoscopy). Metastasis from lung cancer is also unique in that they are rarely bilateral and are sometimes painful. It is also vital to differentiate metastasis from primary melanomas. Breast cancer metastases, for example, tend to be smaller (<3 mm) compared to the average thickness of choroidal melanomas (5.5 mm).10

Metastasis are also unique in appearance in that they tend to be yellow, homogenous and the overlying RPE is not disrupted to the extent in melanoma. Although creamy yellow lesions are classic, metastasis may also present with exudative retinal detachments or optic nerve edema.

Any lesion suspected to be ocular metastasis should be referred to an ocular oncologist. Systemic disease will be treated in conjunction with the primary oncology team.

In Figure 22, ocular metastasis from lung cancer is pictured. 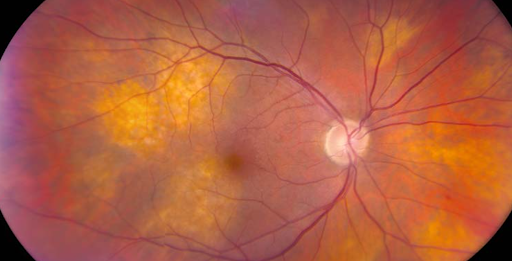 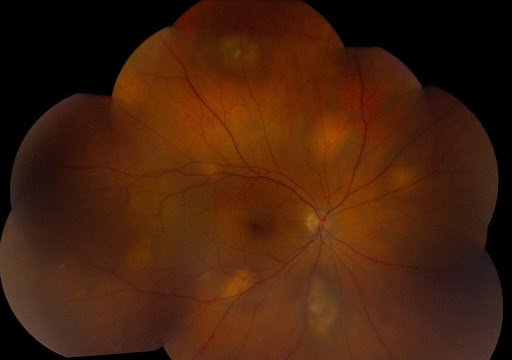 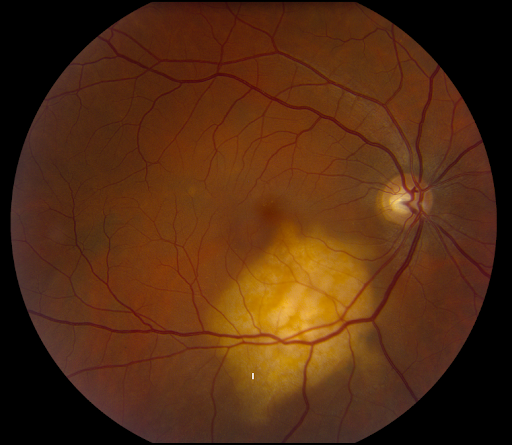 Colobomas represent a failure or incomplete closure of the choroidal or optic fissure during development. They can occur in the iris, ciliary body, choroid, retina, and optic nerve. Colobomas of the choroid, retina, or optic nerve result from failure of posterior closure. The incidence of ocular colobomas is rare, occurring in 0.5 to 2.2 cases per 10,000 live births.12 Colobomas can be associated with many systemic disorders and other eye abnormalities.

Individuals with posterior colobomas have a higher risk of retinal detachment (some estimates stating as high as 40%) and typically appear as an area of whitening with pigment deposition at the border of normal retina and the coloboma.12

Patients with bilateral colobomas are sometimes referred to a genetics specialist to evaluate for systemic disorders. Typically colobomas are observed; however, some may be barricaded with prophylactic laser to reduce the risk of retinal detachment. Other diagnoses to consider when colobomas occur posteriorly include optic nerve pits, optic nerve staphylomas, morning glory discs, and other general inflammatory lesions.