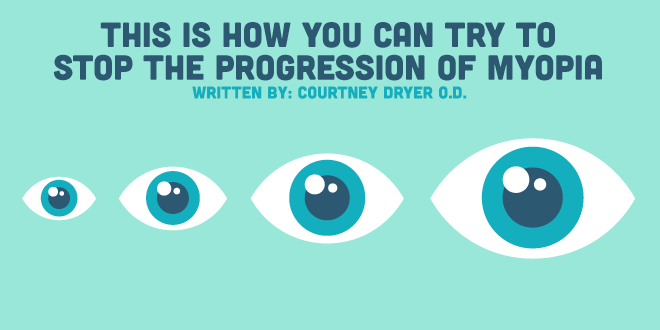 As an optometrist, it is likely you are asked about myopia progression from concerned parents every day.

Is there anything we can do to stop his eyes from getting worse?

According to a study conducted in the United States between 1999-2004, one-third of the population is affected by myopia.

In Eastern Asian countries, it is estimated that 90% of the population are myopic.1

The factors influencing the progression of myopia are not fully understood, but are believed to be a combination of 2 main factors.

In recent studies conducted of twins, results support a heritability index of 77%.

However, these same studies concluded,

“it is hard to show anything but a modest effect on their etiologies. Thus we are still left with the impression that the influence of environment exerts a greater effect than does the concerted action of several genes.” 4

2. Near Work vs. Time Outdoors

It has long been thought that the accommodative efforts required in near work contribute to the progression of myopia because the prevalence is much higher in developed countries.

Recent studies have not correlated with this theory.

The Collaborative Longitudinal Evaluation of Ethnicity and Refractive Error Study (CLEERE Study) was conducted to study the effects of certain activities on myopia progression during a 1-year period.

The study found that the amount of hours spent reading for pleasure, other near work activities, or outdoor sports activity had a clinically insignificant effect on annual myopia progression.

An additional 10 hours of reading for pleasure only correlated with an average increase of -0.08. 5 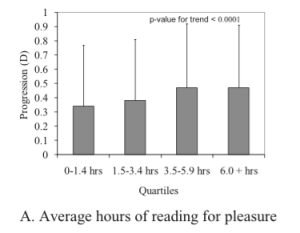 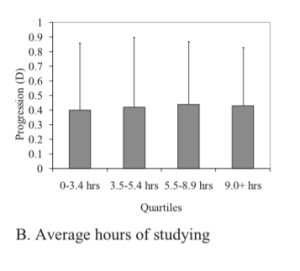