EssilorLuxottica has partnered with Facebook to create the Ray-Ban Stories, the most fashionable piece of wearable tech yet. We tried them out—here’s what to know from an optometrist’s perspective. 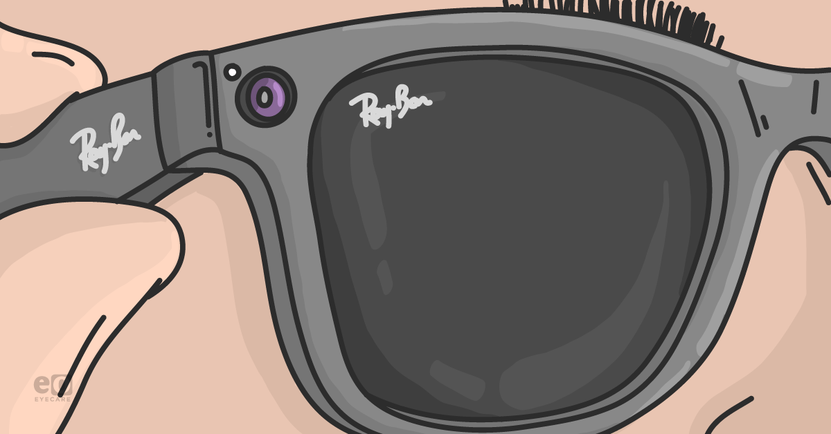 Last week, Facebook and EssilorLuxottica unveiled their new partnership: the Ray-Ban Stories, their new foray into wearable technology. As soon as they dropped we decided to pick up a pair to shoot some product photos in our studio plus a montage on the boardwalk in San Diego.

The first pair of smart glasses created from this partnership are going on sale for $299 and will be found wherever Ray-Bans are sold—LensCrafters, Sunglasses Huts, and maybe even your own practice. Featuring two front-facing cameras, an embedded speaker and microphone, and a dedicated photo syncing app (Facebook View), the Ray-Ban stories are capable of storing 500+ photos or 30 30-second videos, playing music, and taking calls via Wifi and Bluetooth. 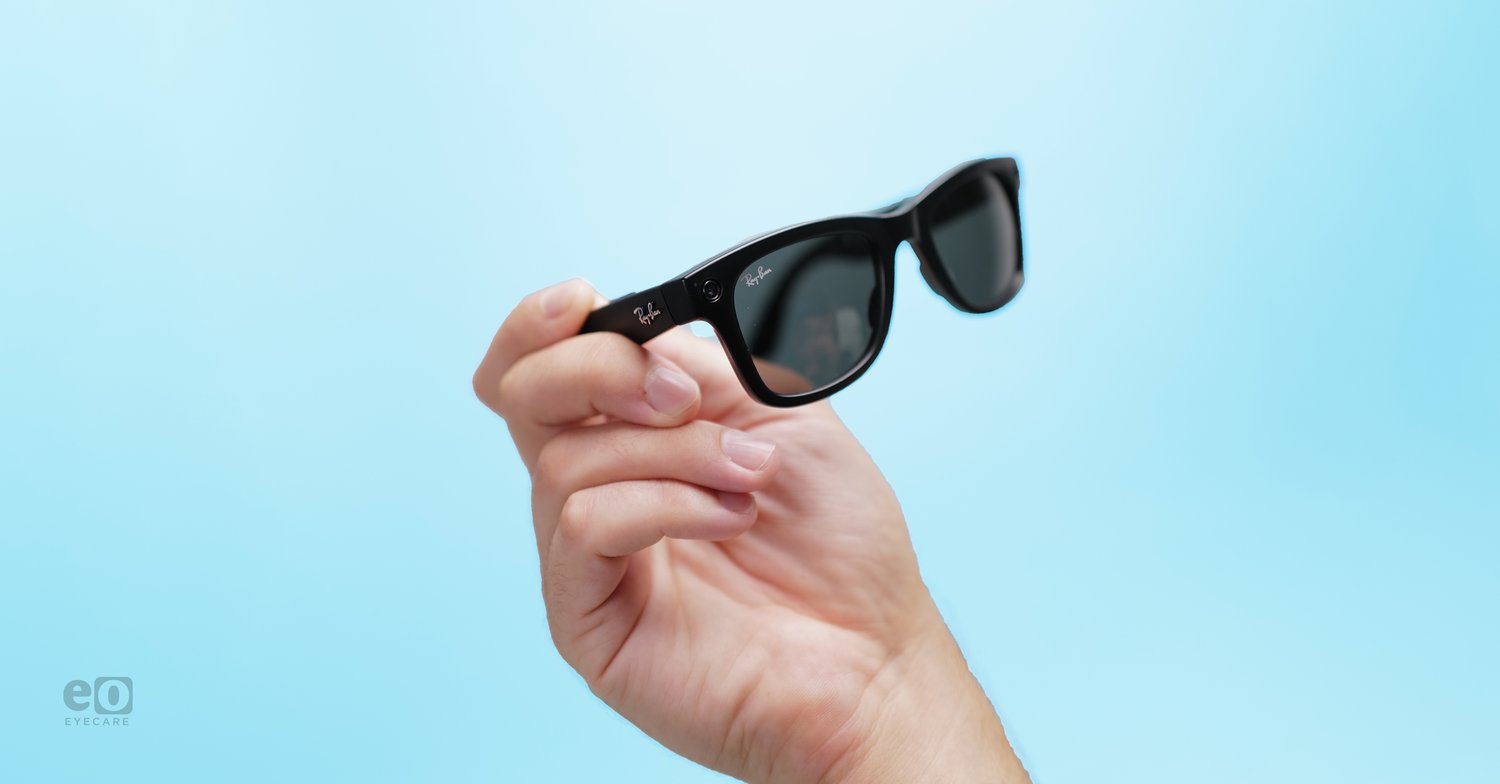 The Ray-Ban Stories are like any other piece of wearable tech out there: they consist of a camera and a phone built into a pair of glasses—so why should optometrists and other healthcare professionals care?

Well, I tried them out this week, and to my surprise, they actually exceeded my expectations. I went into them thinking big, bulky, bad battery, privacy concerns with Facebook, and difficult user interface. I was pretty much wrong on all of those fronts. The glasses feel like your standard Ray-Ban Wayfarers—very light and non-invasive. The battery was held up well and the charging case and set up were super easy. I worried about the Facebook View app, but Facebook really stays out of the way and didn’t link at all to my Facebook account. Instead, it just acted as a tool to get footage where I wanted it so that I could Airdrop it to my computer and work with it in Adobe Premier.

I decided to put these to the test and shot a bunch of footage with them down at the San Diego boardwalk (check out the video). I captured some cool scenes, played some music, and enjoyed the sunset—the glasses stayed out of the way and allowed me to capture some great POV footage without having a GoPro strapped to my head or chest. That being said, I think these will be big for content creators and will even help independent practices offer second pair lens sales. I’m sure Facebook has more innovations up its sleeve in terms of camera quality, stabilization, and new features.

What I’m most interested in is the implications for improving patient care. This product isn’t that. It was never intended to be that, but it does bring us one iteration closer!

It’s true, there aren’t any current clinical applications of these glasses, at least none that spring to mind. But whether you’re considering adding these to your practice’s optical rotation or wondering what EssilorLuxottica’s turn to wearables means for eyecare, I am going to put my optometrist hat on and tell you what I think is important.

There’s one thing that every optometrist loves and that’s second pair glasses sales. Most often patients require a primary pair of glasses, likely a single vision or progressive lens, that’s going to be their workhorse. Yet fairly often we as optometrists offer our patients a second pair of glasses, most commonly prescription sunglasses, computer glasses, or dedicated reading glasses.

My guess is that Ray-Ban Stories will likely be marketed to the 18-35 demographic across a global market. That means optometrists and opticians alike should brace themselves for the conversation about the implications of putting prescription lenses in Ray-Ban Stories glasses. If your practice is optical heavy, you might want to consider marketing this right now—whether on social media, email marketing, or through paid ads. There are bound to be some consumers that are hungry to use these; and so why not grow your practice and market them a bit? 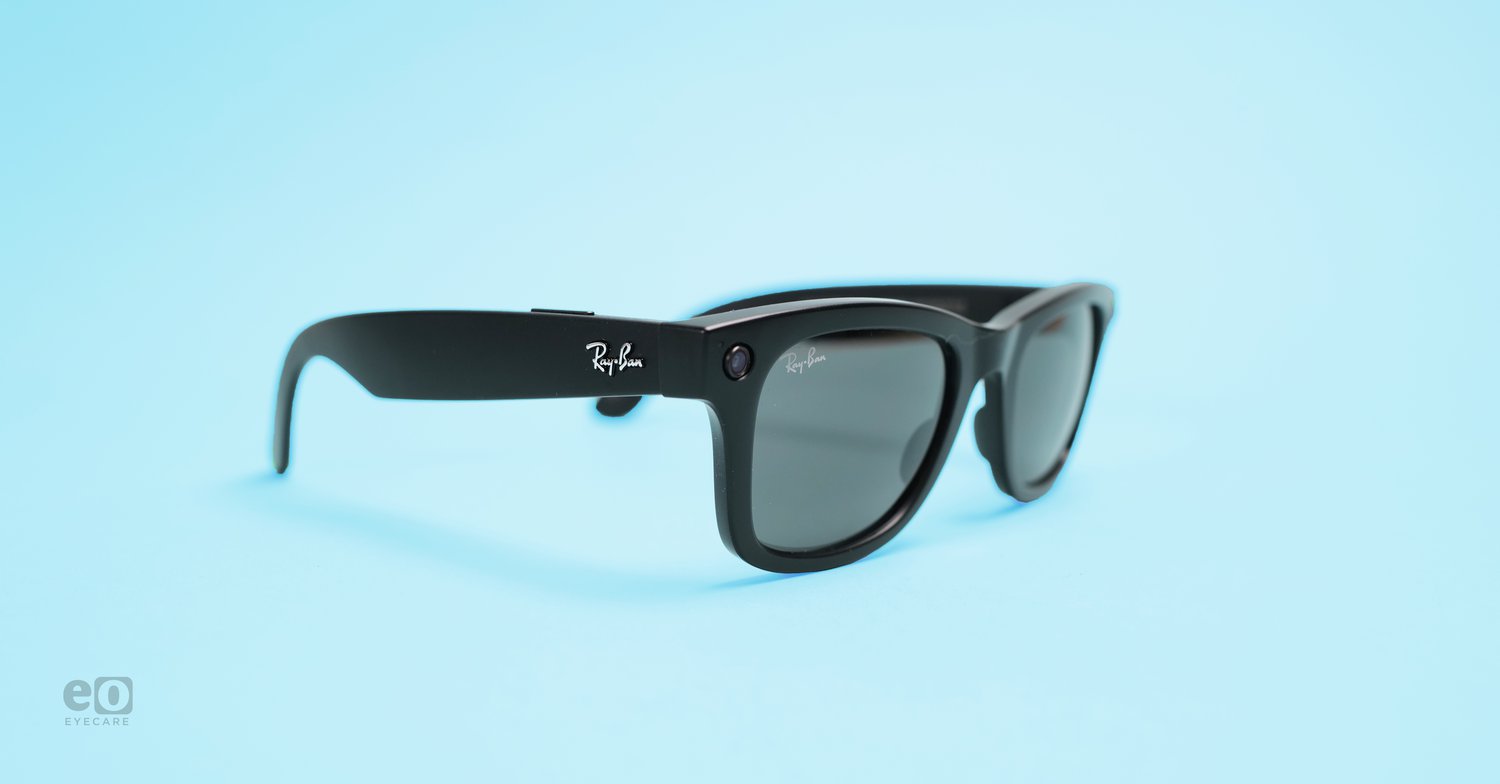 The taglines for the Ray-Ban Stories include “It’s time to look up again” and “Welcome back to the moment”—these are glasses for those people who are used to looking at the world through a phone screen, and they’re being marketed accordingly. Your first patient to ask about blue light lenses is probably going to be the same one to ask you about these—or the patient who came in to sheepishly see about a lens replacement after damaging their specs while taking a sweet action shot on their phone. 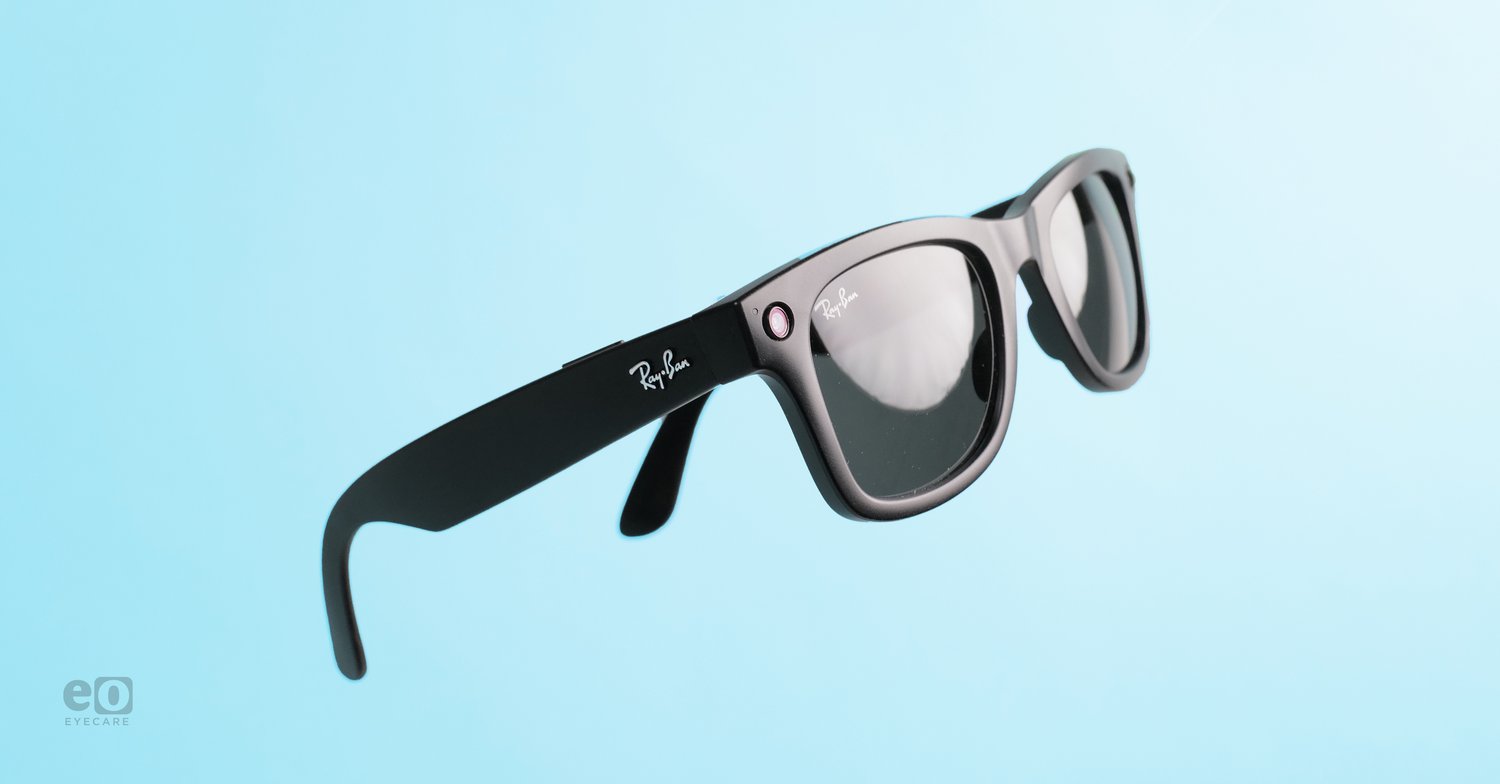 Joking aside, a 2019 cross-sectional study suggested that head and neck injuries involving cell phones, which have increased steadily over the last several decades as cell phone usage became commonplace, most often happen due to distraction. When we consider that a study such as this one only counts injuries severe enough to send a patient to the emergency room, it becomes pretty clear that there will be a subsection of our patients delighted to have a hands-free option that lets them take photos and videos for social media without risking dropping their phones or hurting themselves.

However, when it comes to the practice of eyecare, even smart glasses more generally aren’t going to have a strong impact on our clinical practice. Sure, maybe smart glasses can improve healthcare, but are they going to be pivotal in improving eyecare? Of course they will, just not in the short term.

But not even their manufacturers are arguing this—rather, this is intended to be just one step in the direction of true wearable AR, or augmented reality.

Augmented reality is already part of daily life, from games like Pokemon Go to the number of home furnishing websites that offer you the opportunity to “see it in your space” using your phone camera. Museums and other educational institutions have gotten in on the trend as well, offering supplementary content to visitors through their phones. It’s not ubiquitous by any means, but it’s there if you look—through your phone, that is.

Augmented reality has applications in healthcare right now as well—from 3D modeling for teaching to the heads-up displays of new surgical microscopes, like the Artevo 800, that show an overlay of information while allowing the surgeon a wider view. We’re still a long way from the HUD and haptics of Minority Report and other sci-fi visions, but it’s an obvious goal of wearable technology.

The next step there, and the one that is of most interest to those in the eyecare industry, is user-facing capabilities. By this, I mean the variety of gaze tracking technologies under development by companies like Eyefluence, EyeCon, Gazepoint, and others.

What’s most interesting about this new product is EssilorLuxottica’s involvement. Back when Snapchat first ventured into wearables, they approached Luxottica as a potential partner. Obviously, that partnership never happened.

With this partnership, however, the Ray-Ban Stories are likely to have a brighter future than eyecare’s previous forays into wearable technology. VSP launched Level back in 2018, a pair of smart glasses that were essentially an activity tracker with a GPS. The program included rewards and charity through the Eyes of Hope initiative, but was discontinued in 2020. Outside of eyecare, there’s been the aforementioned Snapchat Spectacles, plus a wide variety of other companies exploring the space.

For most consumers, however, smart glasses of any stripe are too clunky right now—just look at the rise and fall of Google Glass. Yet if augmented reality is going to take the next step, it’s going to be wearing glasses when it does so.

Eyes On Eyecare is a digital publication that provides clinical and career education to the young generation of optometrists and ophthalmologists. We work with eyecare professionals to create compelling, educational content available for free to all those in the eyecare … 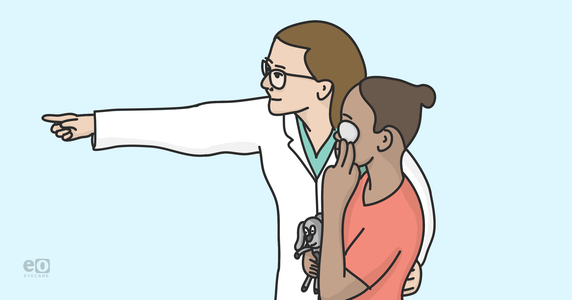 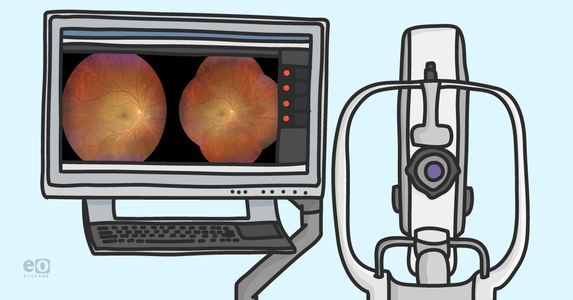 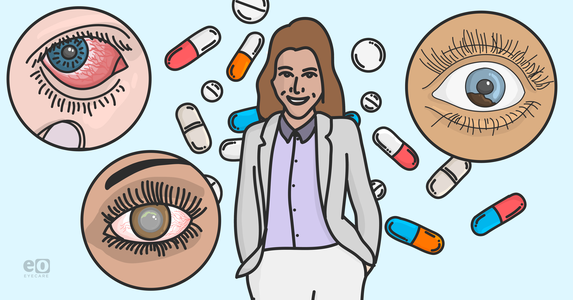 I Did My Own Research: How to Read and Analyze a Scientific Paper 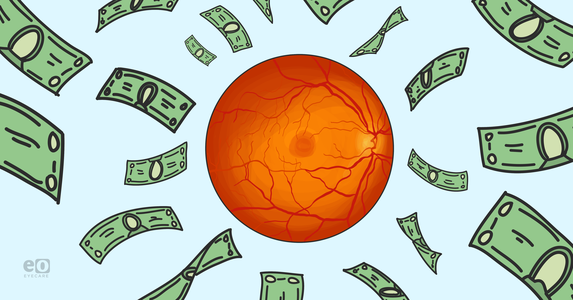