Not only is there new material, but the digital edition can be FREE! Here’s what you need to know about the fifth edition, Excellent Perimetry. 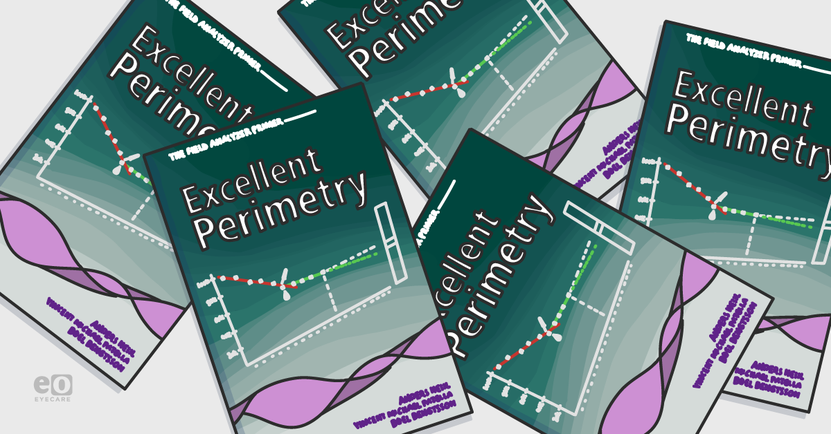 On January 28, 2021, ZEISS unveiled the fifth edition of The Field Analyzer Primer: Excellent Perimetry, and for the very first time, the digital edition of this book—written by the experts who invented the Humphrey Visual Field Analyzer!—is going to be absolutely free to download. Here’s why this book is so exciting, and what you can expect from the new edition!

What’s new in the Fifth Edition:

Read on to learn more about this new edition!

I know what The Field Analyzer Primer is, but can you give me a quick refresher?

The first edition of The Field Analyzer Primer was published more than thirty years ago, shortly after the first computerized Humphrey Visual Field Analyzers (HFAs) went on the market. That edition covered the principles of perimetry—why it’s done, how to do it, and how to read the results—as well as updates and advances in perimetry at the time.

However, as Douglas Anderson, MD notes in the Foreword, the Primer is useful to any student of optometry or ophthalmology: “This introduction to the use of perimetry clinically, particularly as applied to the management of glaucoma, is quite valuable, given the present-day scarcity of up-to-date textbooks or other instructional material on this topic.”

The Field Analyzer Primer not only covers the basics of perimetry, but also goes into the technology of contemporary glaucoma perimetry, and why the gold standard includes the testing and detection of macular damage in all stages of glaucoma. Prior to this, macular visual fields such as the 10-2 were typically reserved for advanced glaucomatous disease when patients were left with only a central island of vision, but recent research has demonstrated the significant extent to which glaucoma damages the macula even in early stages of the disease. This has resulted in many clinicians incorporating 10-2 visual fields into their testing protocol for all glaucoma patients and suspects. The 24-2C combines the 24-2 protocol with 10 additional macular points. These added test points sample from the most vulnerable areas of the macula to help detect damage in all stages of glaucoma.

Since perimetry is the preferred method for monitoring glaucoma, it’s especially crucial that any student or practitioner of optometry knows the basics, particularly if they’re interested in practicing in the medical model! Perimetry is also used for the diagnosis and management of neurological diseases as well as some retinal diseases, making it an invaluable tool in the optometrist’s armamentarium.

Interesting! But what’s so great about the fifth edition?

The fifth edition of The Field Analyzer Primer: Excellent Perimetry has been revised and expanded to make it even more useful (one might even say effective) for optometry students and for any practicing clinician looking to brush up on basic principles and guidance for using perimetry. With the introduction of the SITA Faster testing algorithm, visual field testing times have been drastically reduced—resulting, hopefully, in more frequent VF testing. What this means is that practitioners who might have previously avoided visual field testing could be turning to it more often, and accessible and up-to-date reference material is more important than ever.

The basic principles section of Excellent Perimetry has been expanded, as has the chapter on the increasingly important role of perimetry in glaucoma management. Most usefully, perhaps, is the expanded emphasis on addressing patient concerns and explaining perimetric data to patients.

Finally—drumroll, please!—there is a totally new chapter on server-based analysis software and how to best utilize it in making patient care decisions. From the authors:

“Our third point of emphasis is embodied in a new chapter (Chapter 8) covering the use of server-based analysis software in order to provide user access to the Humphrey Statpac and Glaucoma Progression Analysis applications on desktop computers. We believe that this software approach has truly come of age and, perhaps more importantly, also can now facilitate quick and effective patient care decisions by serving as a summing point for other clinical data, such as automated imaging results, clinical observations, surgical events and pharmaceutical regimens.”

Wow, I’m convinced! Can you share a sneak preview of the new material?

We sure can! Check out some of these sweet new images, with captions adapted from the book: 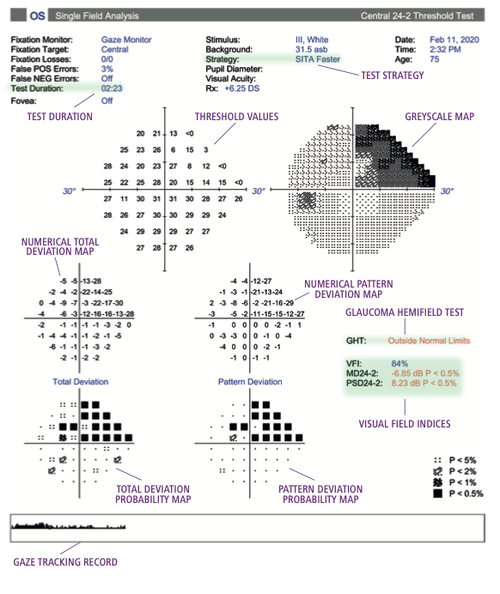 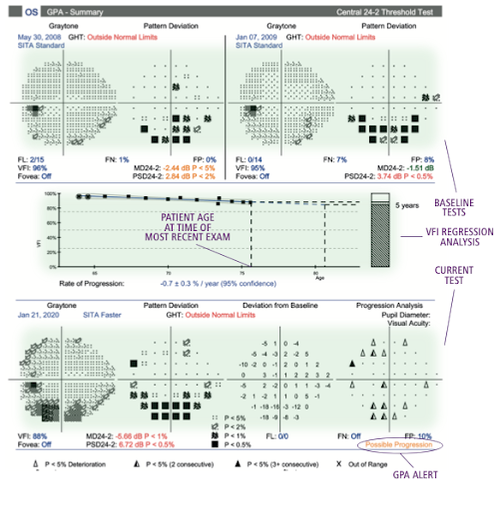 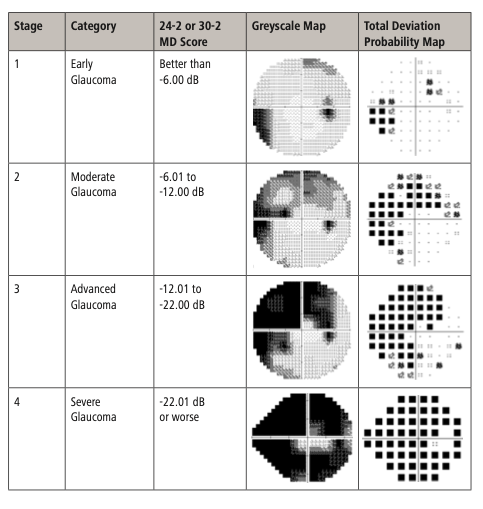 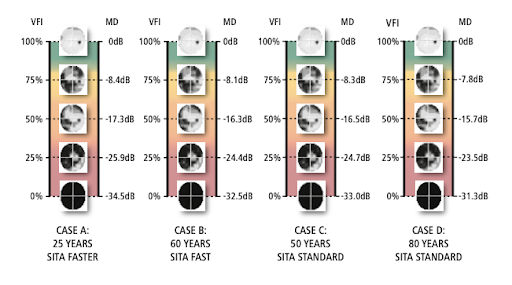 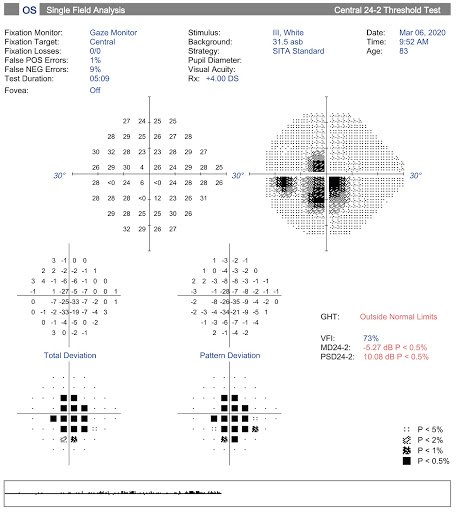 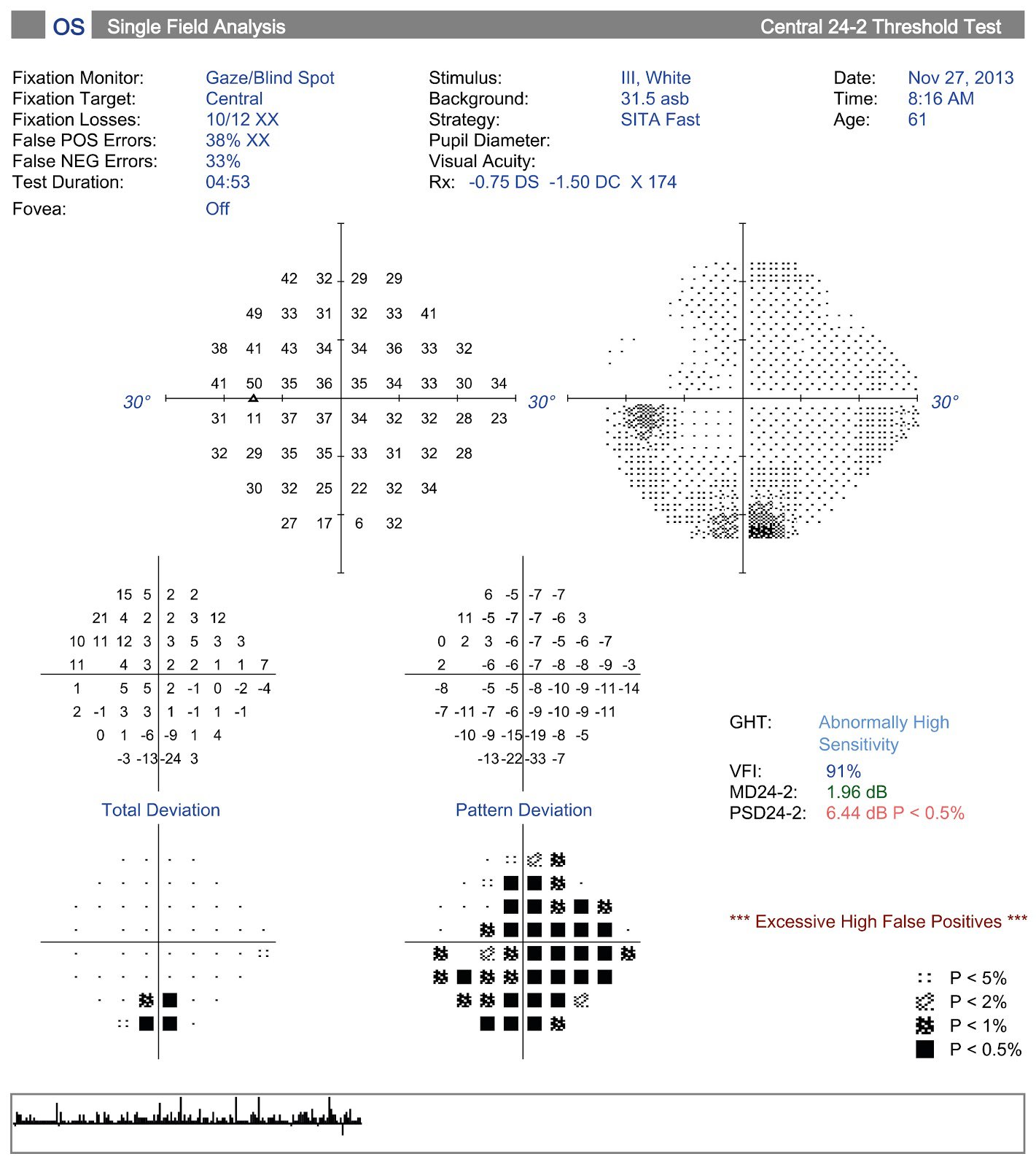 Figure 5: What happens when patients press the response button even when they have not seen the light, now in color.

Effect of false positive responses. This so-called "trigger-happy" field was caused by a high number of false positive responses by the patient. In this example, four distinct signs are present that are commonly associated with high levels of false positive patient responses: 1) At 38%, the False Positive Error rate is very high, and has resulted in a printed message saying, “Excessive High False Positives.” 2) Many measured threshold sensitivities are above the eye’s physiological limits, with values of 10 or 20 dB above age-normal in the numerical Total Deviation map, threshold sensitivity measurements ≥ 40 dB, and white patches in the grayscale map. 3) The GHT shows a message saying, "Abnormally High Sensitivity." 4) There is an "inverted cataract pattern" in the probability maps, in which there are many more significant points in the Pattern Deviation probability map than in the Total Deviation probability map. A fifth sign is absent in this example, but sometimes is seen, in which the blind spot is not indicated on the grayscale plot. (Chapter 12) 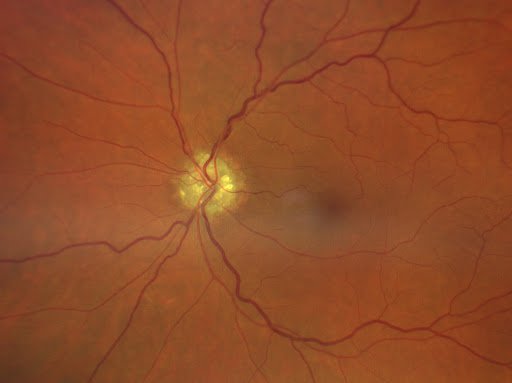 Figure 6: A new retinal image from the book: Optic disc drusen (A). Associated visual field findings are quite variable, but are often similar to those in glaucoma (B). The field has deep field defects particularly in the inferior nasal area. This patient’s identical twin was found to have similar optic nerve drusen and similar visual field damage. (Chapter 10)

That’s awesome! How do I get the Excellent Perimetry digital book?

Good news! The fifth edition will be available in March. Sign up here to be the first of 500 to get the digital copy!

Eleanor Gold is the Managing Editor at Eyes On Eyecare. She is passionate about science communication and education (particularly in the field of eyecare!), holds a PhD in English from the University at Buffalo, and in her spare time enjoys reading, water sports, and travel. 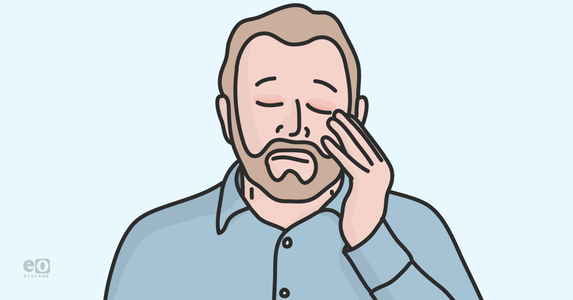 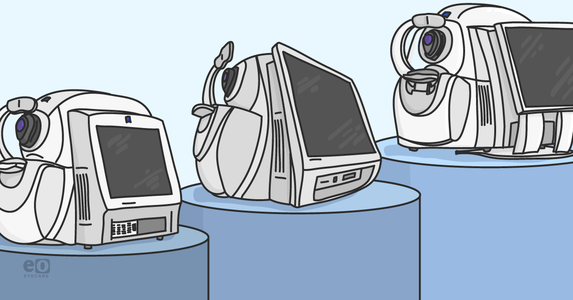 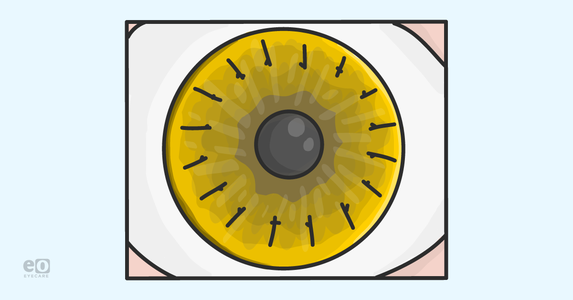 What ODs Should Know About Corneal Transplants