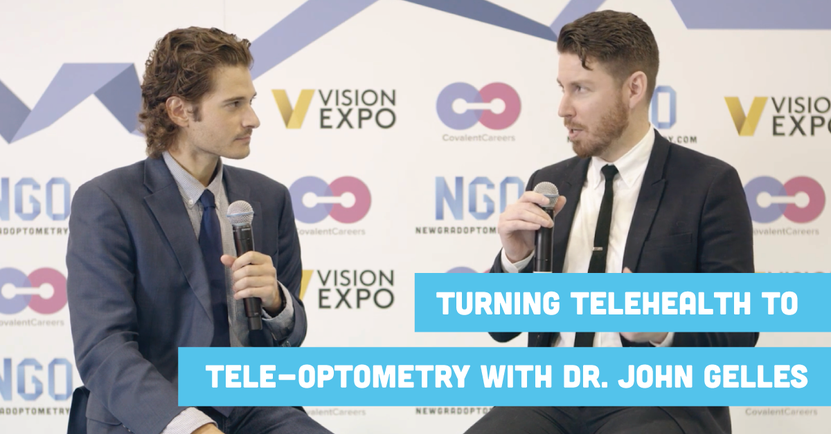 Telemedicine is paving the way for a new era of healthcare. We met with Dr. John Gelles, OD and CETO for EyecareLive and PeerMed, to discuss what you need to know to stay up to date on telehealth in optometry. Beginning In 2015, Dr. Gelles and his associates, including several Silicon Valley entrepreneurs, doctors, and engineers, gathered together to build a telemedicine platform called EyecareLive to connect doctors to their patients. This idea expanded to then include connecting doctors to other doctors via PeerMed.

There is a stigma surrounding the idea of telemedicine in the optometry industry, but where do those fears come from, and what makes the technology so scary? One key thing to consider is a difference between providing teleservice rather than telemedicine. Using teleservice practices, online services can do things like:

Companies with these missions in mind began to subvert real care. Other than providing these services, they made doctors seem greedy or that doctors were superfluous. “Why should I pay an optometrist for this when I can do it online for free?” In true telemedicine, however, there is an opportunity to build stronger doctor-patient relationships. Using proper telemedicine platforms, doctors can communicate directly with their own patients and ensure continuity of care.

The future of healthcare and telemedicine

The evolution of technologies in eyecare is inevitable, and practicing ODs need to embrace the solutions available to them. “Certainly the last thing we want is for ODs to get behind the ball on telemedicine,” says Gelles. “We want to make sure that doctors that have the best interests of the patient in mind are the ones driving the technology.”

There is a fear of rapid advancement in the healthcare industry across the board, but large corporations are beginning to make moves in the telemedicine space. It’s essential that private practice ODs are seeing that now and driving the technology toward service.

How do I get started using telemedicine?

The most important tool that ODs must have in place for telemedicine is a secure, HIPPA compliant platform. While there may be some open lines of communication between doctor and patient that become commonplace (like texting a patient) they may not be HIPPA compliant!

Another core step in the process is to properly research state laws around telemedicine as each can vary dramatically. For example, some states will require care to be established in-office before any telemedicine consulting takes place. “Which is really the proper way we should be doing things,” Gelles adds. With laws like that in place, you also can’t practice telemedicine across state lines.

Billing and coding can change quite a bit from state to state as well. California, for example, has fairly liberal laws regarding telemedicine; “billing and coding can go through with GT and GQ modifiers for synchronous communication (live, face-to-face calling) or store-and-forward communication (sending images, videos, or surveys), and you can be paid at various levels based on your modifiers.”

What services can telemedicine provide?

While telemedicine can cover a wide variety of treatments and problems, a doctor’s comfortability with treating certain conditions is also a huge thing to consider. An OD may feel comfortable with red-eye that’s a subconjunctival hemorrhage or related to allergies.

On the flip side, another red-eye patient may have symptoms of light sensitivity or pain, and they could require a full exam with a slit lamp. This creates an opportunity, however, to instruct the patient on the next steps and to get them in for an exam immediately. Understanding both the advantages and limitations of telemedicine can help it become a remarkably powerful tool.

Telemedicine is also making huge strides on the B2B side of eyecare. “I’m using it with various contact lens labs that can look through my slit lamp in real time and evaluate a lens on an eye to help determine if I need to make further changes to it. Is the fit adequate? Vault in a scleral lens? Clearing the limbus in scleral? Is my haptic tight or too loose?”

Especially for new grads or doctors interested in growing their contact lens specialty, having a second set of eyes can be invaluable for fast and effective verification. Even for specialty clinics with more seasoned professionals on staff, secure telemedicine channels can be used for lines of communication between doctors at different locations!

How do I implement telemedicine into my practice?

The single most important thing you need to get started in telemedicine is a smartphone or tablet that can connect directly to equipment in-office. Both EyecareLive and PeerMed currently operate on iOS and Android platforms to allow for real-time consultation, store and forward consultations, communications with patients, deploying surveys, and even gather internet-of-things data such as information from blood-pressure cuffs and other large scale data gathering.

Implementing the technology itself is easy enough, but Gelles emphasizes, again, the importance of fully understanding a state’s telemedicine laws and billing and coding requirements before diving too far in.

“Telemedicine is not a bad thing, especially when you’re in control of it.” When a doctor has already established care with a patient, telemedicine can make communication, simple, secure, and provide extra care beyond the services provided in-office, not as a replacement for them. “The idea is to be able to create a hybrid clinic: part physical, part virtual.” Learning the ins and outs of telemedicine now can pave the way for a practice to remain on the cutting edge of healthcare technology in the years to come.

Dyllan is a UC San Diego graduate and the Associate Editor for NewGradOptometry and CovalentCareers. In his time out of the office he is also a full-time Dungeon Master, pet dad, and an avid tea drinker.