The Practical Approach to the Glaucoma Suspect | Eyes On Eyecare

The Practical Approach to the Glaucoma Suspect

In this course, you will learn what a glaucoma suspect is, how to determine the risk level, and how to evaluate glaucomatous progression as well as gain an integrative understanding of fundus imaging, visual field, and OCT findings.

✨ This free course is brought to you by Carl Zeiss Meditec Professional Education.

What is a Glaucoma Suspect?

According to the American Academy of Ophthalmology, a glaucoma suspect is an individual with clinical findings and/or a constellation of risk factors that indicate an increased likelihood of developing glaucoma.

Risk factors for Glaucoma include:

Patients who can be categorized as definitively having “no glaucoma” will present generally healthy, with no significant optic nerve cupping, normal intraocular pressure (IOP), and no retinal nerve fiber layer (RNFL) defects. On the other hand, there are patients with “definite glaucoma,” those who present with severe amounts of optic nerve cupping, very high IOP, and/or several RNFL defects. Both groups are fairly easy to distinguish. However, there is a group that falls in between these two, comprising of patients who are glaucoma suspects, ocular hypertensives, and those with anomalous optic discs. These types of patients can make it tricky in deciding the best course of treatment.

Of the risk factors discussed above, these are the more pertinent ones to pay attention to when assessing the level of risk involved in developing glaucoma: family history, higher IOP, thinner central cornea, disc hemorrhage, larger cup-to-disc ratio, pigment dispersion syndrome, and pseudoexfoliation. Two or fewer risk factors are considered to be low-risk, while three or more are considered to be high-risk.

It is important to note that a large percentage of glaucoma suspect referrals are made on the basis of either large cup to disc ratios, elevated IOP over 21 and/or narrow angles. Other pertinent reasons that warrant a referral, such as pseudoexfoliation and pigment dispersion, are often missed, particularly seen in cases where patients have smaller optic discs or normal IOP.

What to do with a Glaucoma Suspect

At the initial glaucoma work-up visit, it is imperative to perform gonioscopy. Note that it is not possible to diagnose primary open angle glaucoma without a gonioscopic exam. In addition, a baseline OCT, visual field exam, pachymetry, and fundus photos should also be done. Follow-up testing should comprise a repetition of these tests, based on the perceived risk.

The following flowchart can assist in determining when to see a glaucoma follow up: 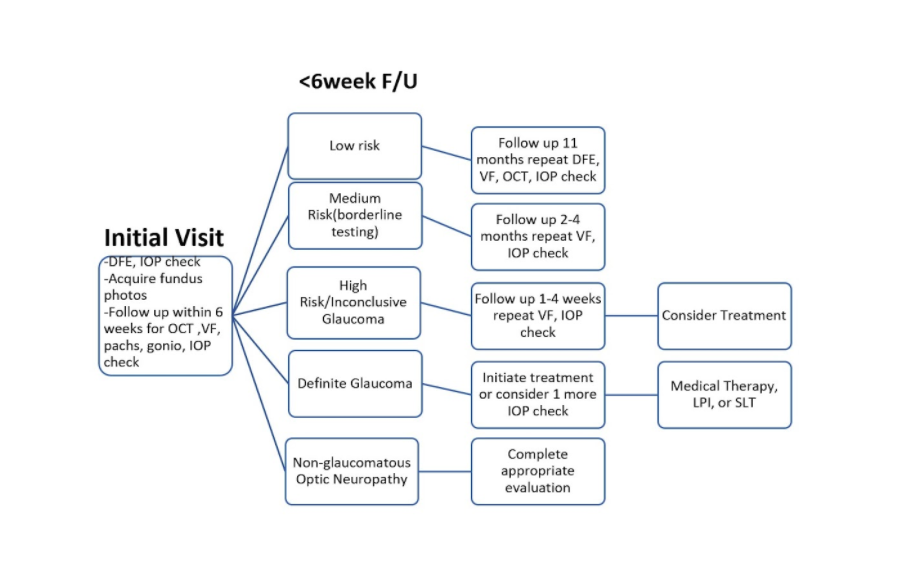 Clinical tip: Many times, you may have a patient who presents initially with one or two risk factors and the clinician is likely assuming that this patient is at a relatively low risk for developing glaucoma. Additional baseline testing a few weeks later may end up revealing a higher risk for glaucoma than initially expected. For instance, a patient may initially present with slightly suspicious optic nerves, but their IOP falls within the high teens and there is no known family history of glaucoma. You may be led to think this is a low-risk patient. However, when they present for follow-up within the six weeks, the OCT scan shows a wedge defect. This is now an indication of a higher risk of glaucoma. Hence, this stresses the importance and relevance of baseline testing in assessing the true risk and thus, solidifying the correct diagnosis.

There are several methods used to grade glaucoma. Majority of the time, when grading glaucoma in a clinical setting, the American Academy of Ophthalmology scale is used. For research and academia purposes, the Hodapp-Parrish-Anderson scale is most often used. 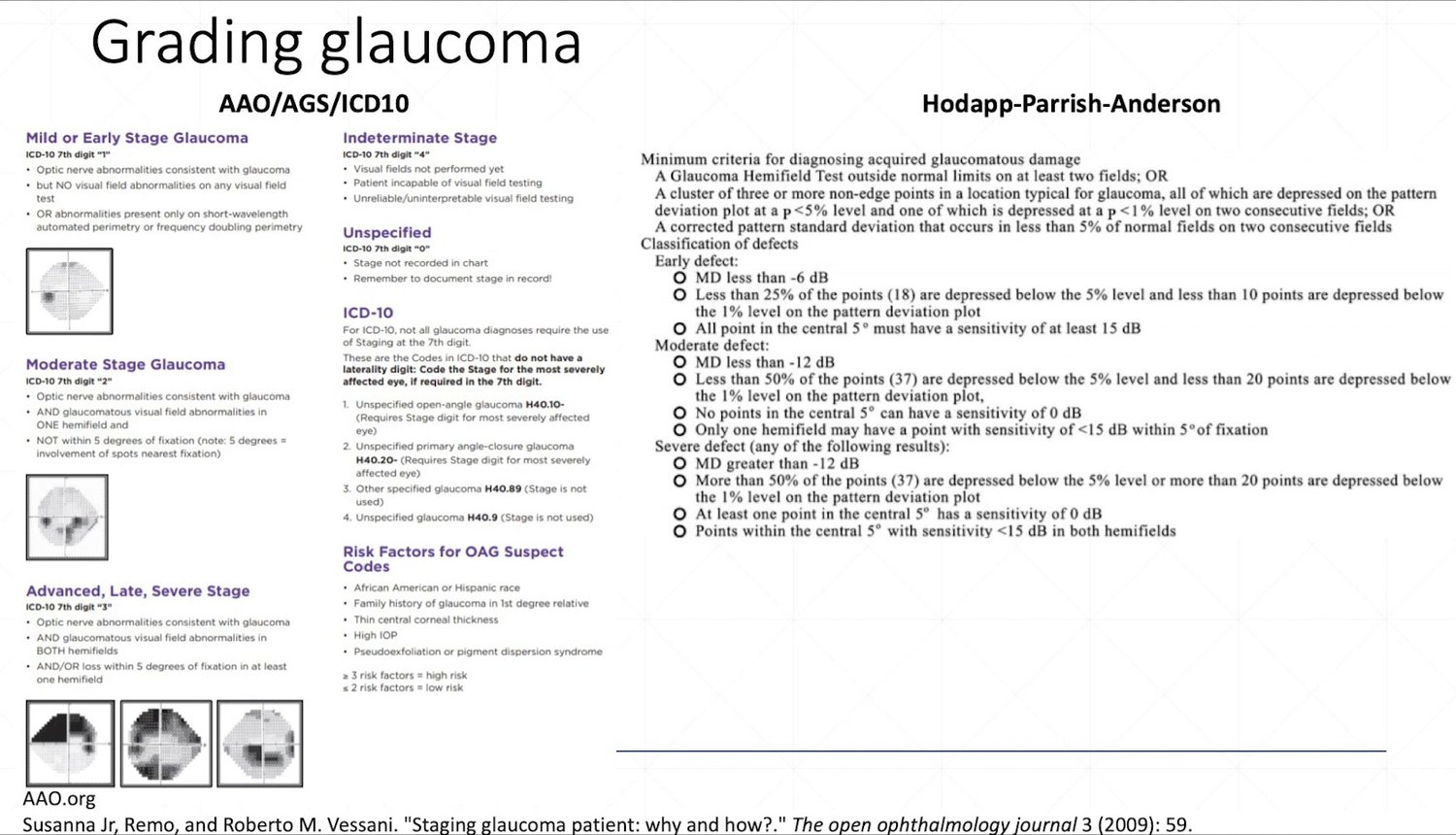 Although every patient’s treatment plan will differ since it is truly customized on a case-by-case basis, there is a general timeframe that can be utilized based on the type and stage of glaucoma and the suggested type of testing for each visit.

When monitoring for glaucoma progression, it is important to consider the following factors:

Type of Progression: Is the glaucoma defect deepening? Is it widening? Is there a new defect forming in another area or in the other eye?

Age-related structural/functional loss: As we age, there is a normal loss of axons and sensitivity within our visual field. This amount of change needs to be differentiated from pathological change.

Clinical tip: ZEISS provides a guided progression analysis (GPA) which is available on the CIRRUS OCT, as well as the Humphry perimeter devices. This feature has the ability to analyze data in the context of variability to provide objective interpretation of progression. Zeiss GPA data can help guide clinicians in their management of a patient’s glaucoma. It can assist us in determining if a patient’s glaucoma is truly worsening and if so, how quickly it may be changing through its projections. This can help to make more informed choices when it comes to making changes to or introducing a new medication or treatment. The data is also able to provide insight on whether a patient may potentially experience vision loss if treatment is not increased via data extrapolation.