NAION is a frustrating disease for clinicians and patients for a variety of reasons. Here's what to know about this disease, from diagnosis to treatment options.

An Introduction to the Disease

Anterior ischemic optic neuropathy (AION) is essentially a stroke of the optic nerve that results from ischemic damage to the anterior portion of the nerve. There are two types of AION: arteritic (AAION), and non-arteritic (NAION). AAION is secondary to vasculitis, especially giant cell arteritis. NAION is the most common type, and is secondary to non-inflammatory small vessel disease. NAION is an acute optic neuropathy due to an infarction of the paraoptic branches of the short posterior ciliary arteries. The impact of AION will typically cause visual field and acuity loss, and the damage can range from minimal to severe.

Introduction to NAION: The Quiz

The optic nerve head receives blood from an anastomic ring known as the circle of Zinn-Haller, formed by approximately 4 short posterior ciliary arteries and peripapillary choroid and plial network. These arteries have distinct upper and lower halves which correspond with an altitudinal visual field defect.

In normal eyes, approximately 1,200,000 axons constitute the optic nerve. Patients with a small cup to disc ratio are considered “disc at risk” because the small optic disc does not provide safety margins. Swelling within the disc causes a cycle of disc edema and peripapillary hemorrhages. The crowded axons swell in the restricted space and compress the capillaries and small vessels. This leads to cytotoxic and vasogenic edema, resulting in ischemia and hypoxia eventually causing NAION. Caucasians are predisposed to developing NAION compared to blacks or hispanics due to smaller cup to disc ratios. Other optic nerve disorders such as optic disc drusen and papilledema are also risk factors.

In the Ischemic Optic Neuropathy Decompression Trial (IONDT), 60% of NAION patients had at least one vasculopathic risk factor. Among those 47% had hypertension, and 24% had diabetes. Hypercholestorlemia is another small vessel disease connected with NAION.

There are other risk factors that are still speculated and under investigation. Among those are sleep apnea, vasospasm, failure of autoregulation, severe anemia, nocturnal hypotension, and underlying mitochondrial abnormality. There is no gender predisposition. The mean age of onset is 57 to 67 years of age, but NAION may occur at any age. In a retrospective study, researchers found that NAION was present in 23% of patients less than 50 years of age. There are also certain drugs associated with NAION, including amiodarone and erectile dysfunction agents, but researchers are still establishing this relationship.

Your patient will present with an acute, unilateral, painless loss of vision over the course of hours to days. In a study done by IONDT, some patients reported a rapid decline in acuity over several days, while another 45% worsened over two weeks, and 29% deteriorated over 30 days. Visual acuity ranges from 20/20 to no light perception, but half of patients will have 20/60 or better, and roughly a third will be less than 20/200. Color vision is lost similarly to visual acuity decrease. On pupil examination, a relative afferent pupillary defect (RAPD) will be present in the affected eye. Visual fields commonly depict an arcuate or altitudinal defect, particularly in the inferior portion. On fundoscopy, disc edema will be present, and often with flame-shaped hemorrhages. In 4-6 weeks, the edema will resolve and the disc will develop diffuse or segmental pallor. The contralateral “healthy eye” is referred to as the “disc at risk” and you’ll see a small crowded optic disc with a small or absent physiological cup. 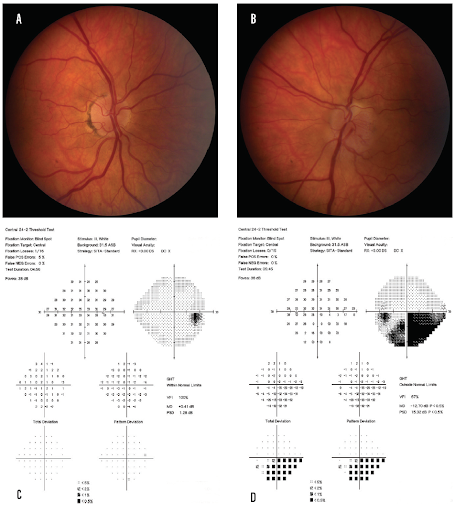 NAION is the diagnosis of exclusion from AAION. So while there is no specific laboratory test for NAION, it is important to evaluate erythrocyte sedimentation rate (ESR), and C-reactive protein (CRP) on older patients to rule out giant cell arteritis. If the lab tests are abnormal, the patient needs steroid therapy, and temporal biopsy is recommended. Some of the symptoms and findings that point towards AAION vs NAION include:

Tip: Pallor develops immediately in AION, and will be chalky-white

Beware of the imposter - old NAION vs glaucoma

AION can be difficult to differentiate from NTG. Both conditions have normal IOP, RNFL atrophy, and produce visual field defects that respect the horizontal meridian. One differentiating factor is atrophic optic disc cupping that is uncommon in NAION (but seen approximately 50% of the time with AAION). A good tip to remember is that fellow eyes with NAION will have the crowded small disc. Taking a good patient history can also give us details on the history of sudden, painless vision loss. And a history of optic disc hemorrhage without optic disc edema points towards a glaucomatous condition.

Another differential diagnosis - optic neuritis (ON)

Optic neuritis and NAION are common optic neuropathies in adults, and can be difficult to distinguish. There is a significant overlap of findings between the two: VA, rate of VA decline, VF loss, and the presence of optic disc edema. Not all cases of ON have optic disc edema, but it is present in approximately one third of cases. NAION is a vascular optic nerve disease, whereas ON is an inflammatory optic nerve condition associated with diseases like multiple sclerosis. In terms of clinical presentation, ON will present with any type of optic disc anatomy, and a large patient base recover vision compared to a small percentage in AION. Pain on eye movement is also a telltale sign of ON.

Treatment and Management of NAION

In the Ischemic Optic Neuropathy Decompression Trial, researchers found that 43% of patients who presented with acuities worse than 20/60 spontaneously regained three lines of improvement at six month follow-up, and 31% sustained that benefit at 24 month follow up. So vision loss may resolve spontaneously but never to the acuity level prior to the incident. And the initial vision loss will be permanent to a certain extent.

Unfortunately, there is no treatment for NAION. There are a variety of options that are unsubstantiated at best, including: optic nerve sheath decompression, subtenon injections of vasodilators, intravitreal bevacizumab or triamcinolone injections, intravenous or topical IOP lowering agents, vasopressors, anticoagulants, oral corticosteroids, levodopa, carbidopa, among others.

Studies show that triamcinolone acetonide injections may decrease the duration of optic disc edema with the prospect of recovering visual acuity, but not visual field loss. But there is controversy over this proclaimed benefit due to the high spontaneous recovery in non-treated patients. There is also the risk of elevated IOP pressure. Systemic steroids have also been studied without recognizable benefits.

Topical brimonidine tartrate 0.2% is presumed to have neuroprotective capabilities. A study showed no statistical difference in visual acuity between patients with placebo vs drug, but some non-significant trends for improved visual field results were seen.

Another treatment option is 80-325mg of aspirin dosed daily. However, even though aspirin is a good anticoagulant, NAION is considered a hypotensive event. Studies show that aspirin has no benefit in the prevention of NAION in the unaffected eye.

A large study by Quark Pharmaceuticals looked into neuroprotective qualities of a drug called QPI-1007. It has been granted orphan designation by the FDA. Apoptosis is thought to be the main cause of retinal ganglion cell death following ischemic injury in NAION (and other neuropathies). QPI-1007 is a siRNA that targets the gene Caspase 2, and is delivered as a single intravitreal injection. None of the subjects lost 3 or more lines of visual acuity after 6 months. Only one subject lost 3 or more lines of visual acuity at the 12 month mark. The study showed success compared to historical data where 15-20% of subjects lost 3+ lines of acuity at 6 months.

The rate of recurrence of NAION in the same eye is <5%, but the fellow eye may develop it in up to 15% of cases within five years.

The primary goal as a clinician is to rule out AAION, detect and control vascular risk factors in the hope of halting disease progression and/or occurrence in the contralateral eye. This disease requires good communication and co-management with the patient's PCP.

In conclusion, NAION is a frustrating disease for clinicians and patients due to a lack of concrete work-up and treatment options. The pathophysiology of the disease is also unclear, rendering it difficult to treat. As clinicians, we should manage any underlying vasculopathic conditions with PCPs, and keep updated with new research for our patients. Prompt referral of patients to treat systemic risk factors may protect their remaining vision and overall health.

Ready to test your knowledge? Head back up to take the quiz!