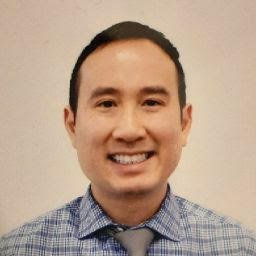 In this course, review the basic glaucoma test battery and the structure-function relationship in glaucoma; plus, learn the latest innovations in visual field technologies and how they can be integrated into the clinical care of patients with glaucoma.

This course will review the basic glaucoma test battery and the structure-function relationship in glaucoma. You will also learn how to systematically analyze a visual field. Finally, you will learn the latest innovations in visual field technologies and how they can be integrated into clinical care of patients with glaucoma.

Note: This course is self-directed learning, and is not COPE-approved CE.

Take this quiz to test your knowledge of new trends in glaucoma diagnosis and management.

Like with any other ocular condition, we always start our exam with a case history. We want to ask if there is a family history of glaucoma, any ocular trauma, or a history of topical corticosteroid use. Of course we need to assess IOP with Goldmann Applanation Tonometry since this is the gold standard for measuring IOP. A good baseline IOP is important since it is the only modifiable risk factor for glaucoma. We need pachymetry since thin central corneal thickness is an independent risk factor for glaucoma. We need gonioscopy in order to classify the type of glaucoma. It is critical to evaluate the optic nerve with a stereoscopic view through a dilated pupil. Next, we need good baseline disc photos. Stereo photos are preferred. The test battery continues with OCT imaging of the Optic Nerve, RNFL, and Macula. Finally, we need to assess Visual Fields. The most common test patterns are 24-2 and 10-2. Now, we have the newest test pattern: 24-2C, which we will discuss more in detail later.

On clinical exam, we diagnose glaucoma when there is suspicious or obvious structural damage to the optic nerve head. According to Dr. Weinreb, there is a continuum of glaucomatous progression. He proposes that glaucoma starts out in the undetectable stage with microscopic remodeling and apoptosis of the lamina cribrosa and ganglion cells. This proceeds to asymptomatic disease where there are detectable changes to the RNFL and optic nerve head or mild visual field changes. The last stage is functional impairment. In this stage there is moderate to severe visual field changes, which progresses to blindness as in end stage glaucoma. 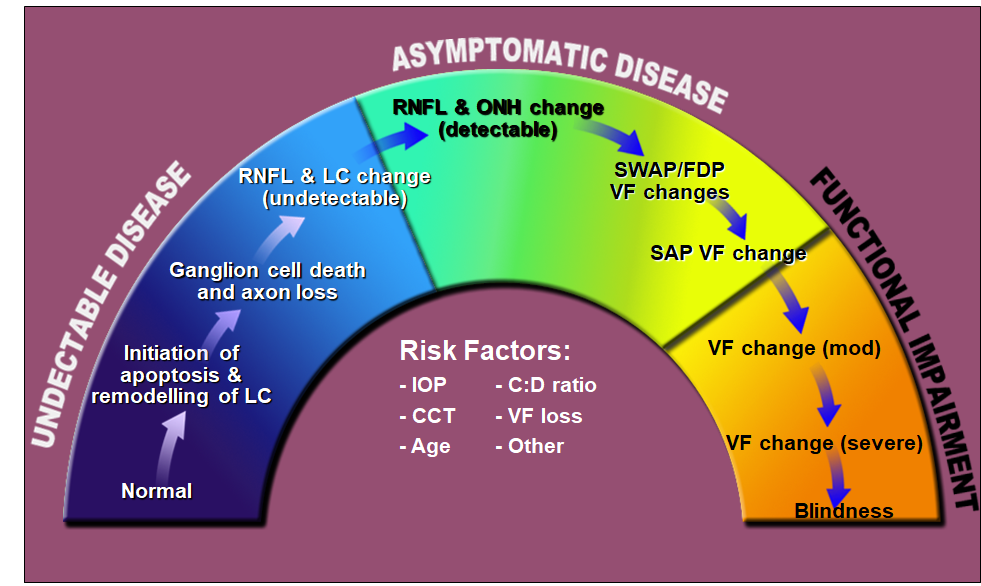 Figure 1: Glaucoma continuum. When field loss occurs, especially if it is in the better-seeing eye, the functional impairment can affect quality of life. Even mild to moderate visual field loss is associated with falls and difficulty driving.

On average, visual field loss occurs when the average RNFL has thinned to around 75 microns. This is already about a 17% loss from normal average thickness.1 This means that substantial structural loss must be necessary before functional loss occurs. 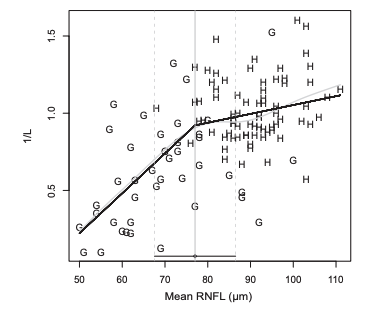 Will visual fields, a subjective functional test, continue to be performed to manage glaucoma in the future? The answer is yes. There are objective functional tests such as ERG and VEP, which may be an alternative. However, these tests are not ready to be widely accepted yet. Visual fields are still important! The testing algorithms keep getting faster. We know about SITA Standard and SITA Fast. Now there is SITA Faster, which we will discuss more later.

Why do we still perform visual fields? It helps us diagnose glaucoma. Not only that, the staging of glaucoma is still dependent on visual fields. Does the patient have mild, moderate, or severe disease? By staging the glaucoma, we can then determine target IOP and how closely we want to follow the patient. Finally, serial visual fields allow us to detect progression of glaucoma. Knowledge of progression is critical to help us decide when to intervene with changes to treatment.

Let us walk through step by step how to analyze a visual field. First, we verify that the right test is performed. Which strategy do we want? Do we want SITA Standard, SITA Fast, or SITA Faster? Next is stimulus size. The vast majority of fields are performed with a Test Size III. The next factor is the test pattern. Do we want a 24-2, 30-2, 10-2, or 24-2C? Is the correct eye performed? Is the correct date of birth entered so that the correct normative database is used? Furthermore, we need to make sure that the patient’s pupils are greater than 3mm in order to reduce illumination artifacts. Finally, refractive error needs to be corrected so that the data is accurate. 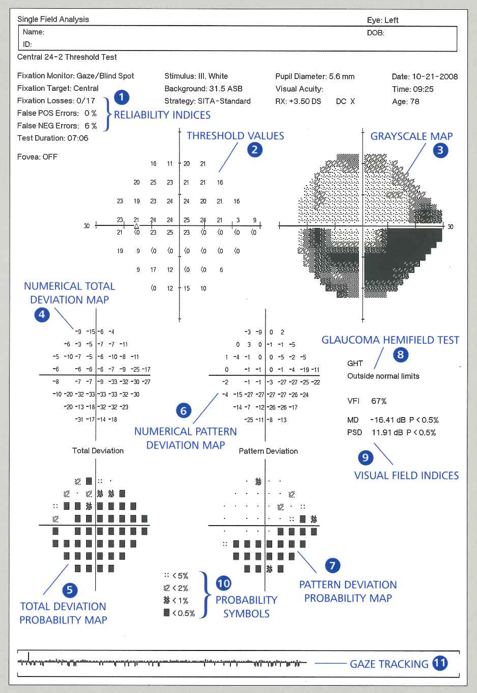 The final reliability index is gaze tracking (Figure 2, 11). This is the line at the bottom of the visual field report that tracks if the patient was staring straight at the fixation light or moving his eye around during the test. If the test is unreliable, the test should not be used! Have a talk with the patient and repeat the field.

Assuming the test is fairly reliable, the next step is to review the probability plots (Figure 2, 7,8,9). There are four of these: Mean Deviation (MD), Pattern Standard Deviation (PSD), Visual Field Index (VFI), and Glaucoma Hemifield Test (GHT). MD is a number that represents the average loss for an entire field. It represents global loss of sensitivity. The higher the MD, the more global field loss a patient has. PSD is essentially a standard deviation of all the values. It represents how much all the values deviate from each other. PSD helps us look for local glaucomatous visual field defects. An increasing PSD over time is suggestive of deepening of a local defect. VFI is a single number that is based on Pattern Deviation that ranges from 0 to 100%. 100% represents a normal field, and 0% represents a blind field. GHT looks at clusters of points on either side of the horizontal meridian and gives us one of five responses: within normal limits, outside normal limits, borderline, general reduction in sensitivity, or abnormally high.

Once we review the probability plots, we can describe the pattern of loss. Is there a nasal step, arcuate defect, paracentral defect, or temporal wedge? Is fixation involved?

Finally, we want to reaffirm the diagnosis. Does the visual field defect match up with the structure of glaucomatous damage based on optic nerve exam and OCT?

One of the latest innovations in visual fields is the new testing strategy SITA Faster. The SITA Faster 24-2 averages only 2 minutes or less per eye! It is 50% faster than SITA Standard and 30% Faster than SITA Fast. As far as reliability indices, it does not have blindspot monitoring so that the test can be faster. It also does not have false negatives since false negatives have been established to be the least useful reliability index. It still has false positives and gaze monitoring. There may be a slight increase in false positives due to the speed of the test. 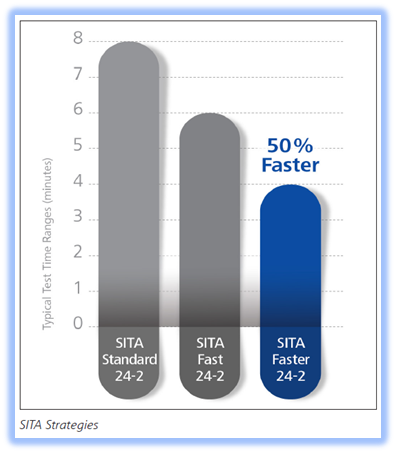 Sometimes our glaucoma patients have visual field defects that involve fixation. Here is the typical scenario for how these central visual field defects are detected. First, we obtain a baseline 24-2 on our glaucoma patients. If we see one or two of the central four points depressed, we usually obtain a 10-2 to assess the extent of the central field loss. This means the patient would have to sit through a second test that is usually performed on another day. The 10-2 actually tests 68 points, but only four of those points appear on the 24-2. It is evident that the 24-2 is not optimally designed for central points. 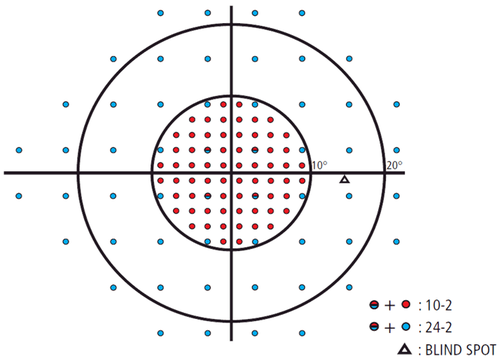 To increase the efficiency of diagnosing visual field defects involving fixation, the logical approach would be to combine the popular 24-2 test pattern with some 10-2 points. Hence, the 24-2C test pattern was created. A team of expert vision scientists picked ten specific 10-2 points and added these points to the 24-2 test pattern.3 These ten points were determined to be the most susceptible to glaucomatous defects. The totality of the 24-2C Test Pattern was designed to give the most relevant clinical information.

A poster presentation at ARVO in 2018 showed that the 24-2C increased the sensitivity of detecting visual field loss in the central ten degrees.4 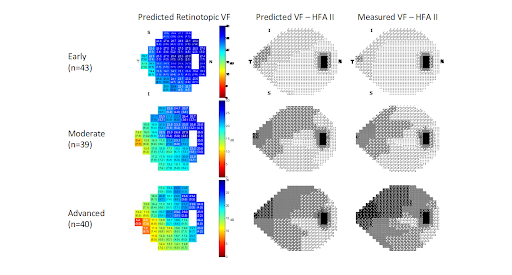 Zeiss OCT offers a PanoMap Analysis, where both the Ganglion Cell Analysis (GCA) and RNFL are combined into one image of the posterior pole (see Figure 9). Previously we had to look at the RNFL and Macula scan separately. Zeiss also offers a Structure-Function report which combines OCT and HVF results (see Figure 10). 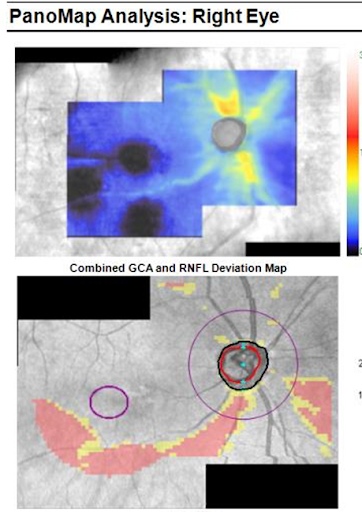 Figure 9: PanoMap Analysis. We can combine both the OCT scans of the RNFL and Macula into one posterior pole image for more complete structural analysis. 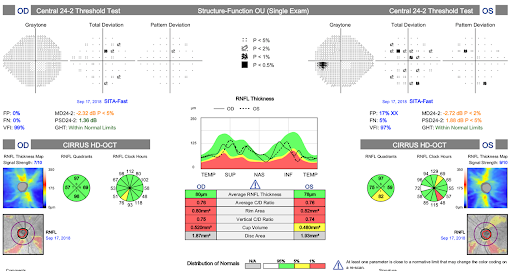 Due to the suspicious optic nerve head appearance not obeying the ISNT Guideline, an OCT of the RNFL and Macula were performed. The scans clearly show thinning in the peripapillary and macular regions, suspicious for glaucoma: 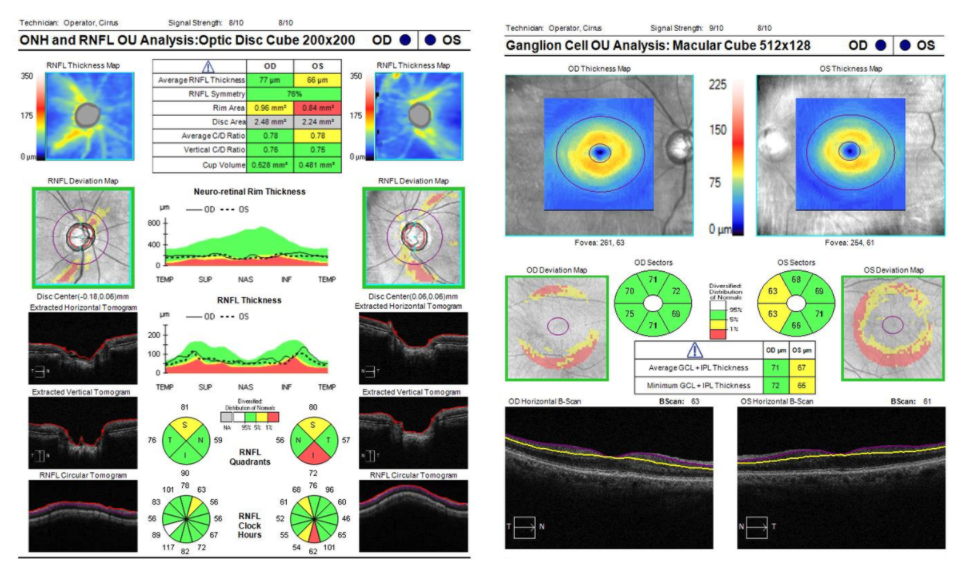 Due to the Pano Map Analysis, we can now integrate both of these scans into one image that gives us a more global view of the posterior pole: 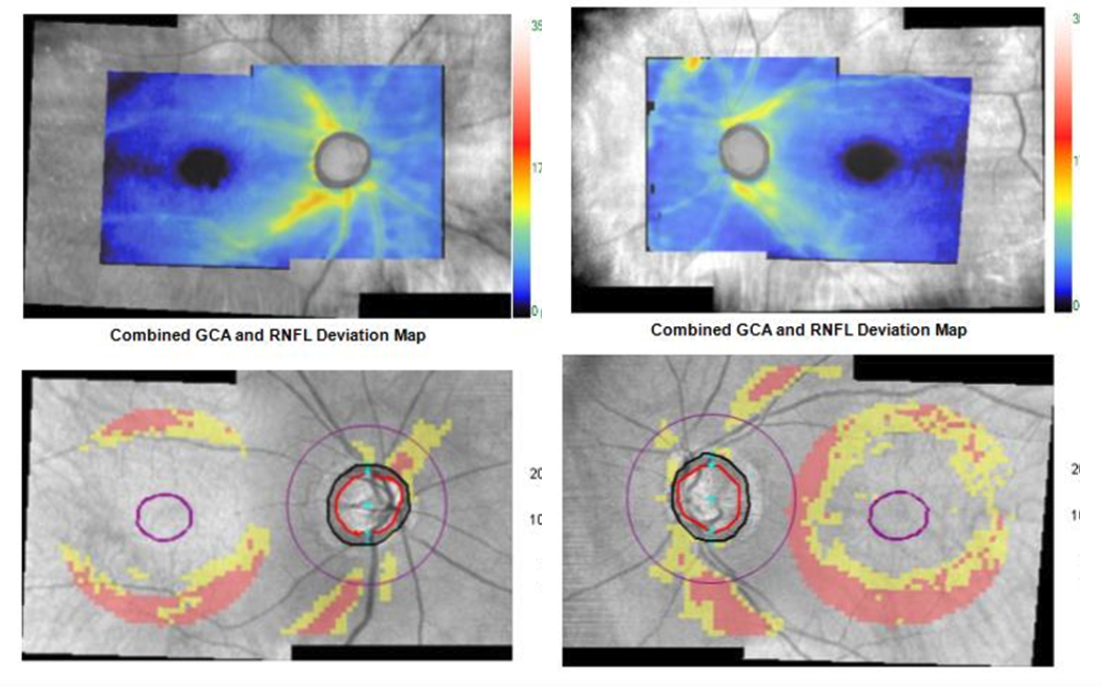 We then obtained visual fields, which revealed a possible early superior arcuate defect OD and normal field OS. Instead of clicking back and forth between the HVF and OCT results, the Zeiss Structure-Function Report can integrate both structural and functional testing modalities: 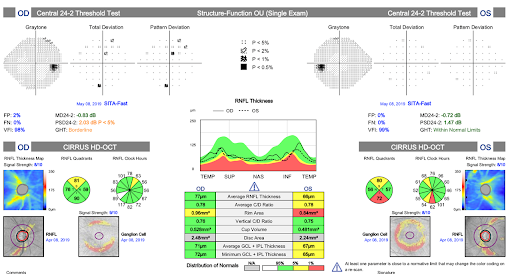 The assessment was Primary Open Angle Glaucoma OS>OD due to thinner RNFL in the left eye. The plan was to start a Prostaglandin QHS OU with a target of 30% IOP reduction. A follow-up was scheduled in 1 month.

Here is another case report highlighting the Pano-Map Analysis and Structure-Function Report. A 70 year old Hispanic Male presented for a comprehensive eye examination. Pressures were 26 OD and 26 OS. Pachymetry was 540 OS and 547 OS. Gonioscopy was open OU. Dilated fundus examination revealed the following:

There is an apparent wedge RNFL defect inferiorly in the OS. This prompted an OCT of the RNFL and Macula, which revealed thinning in both eyes: 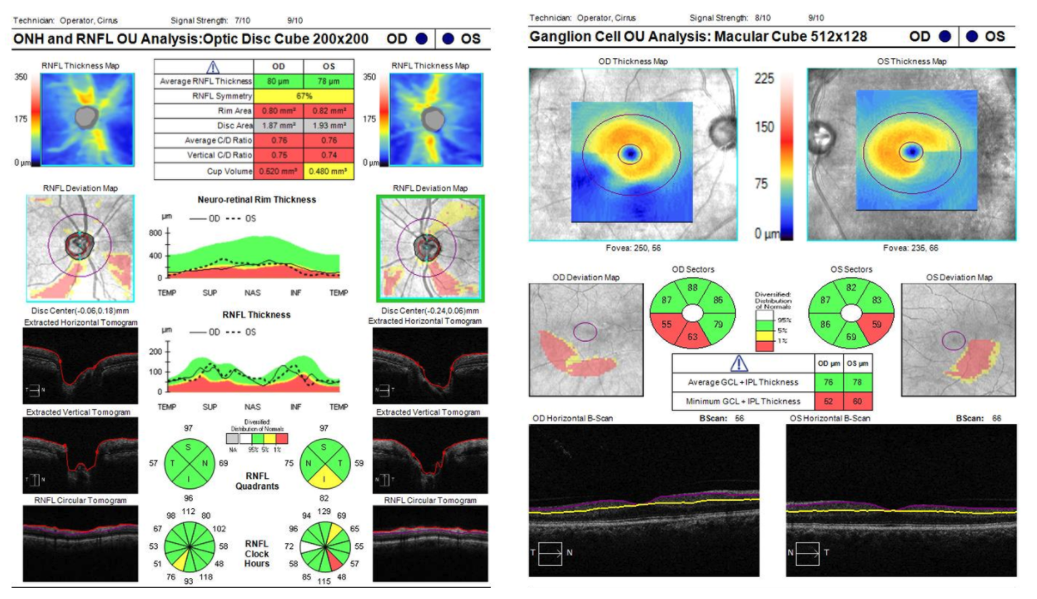 Again, the PanoMap Analysis is able to integrate both Optic Nerve and Macula Scans: 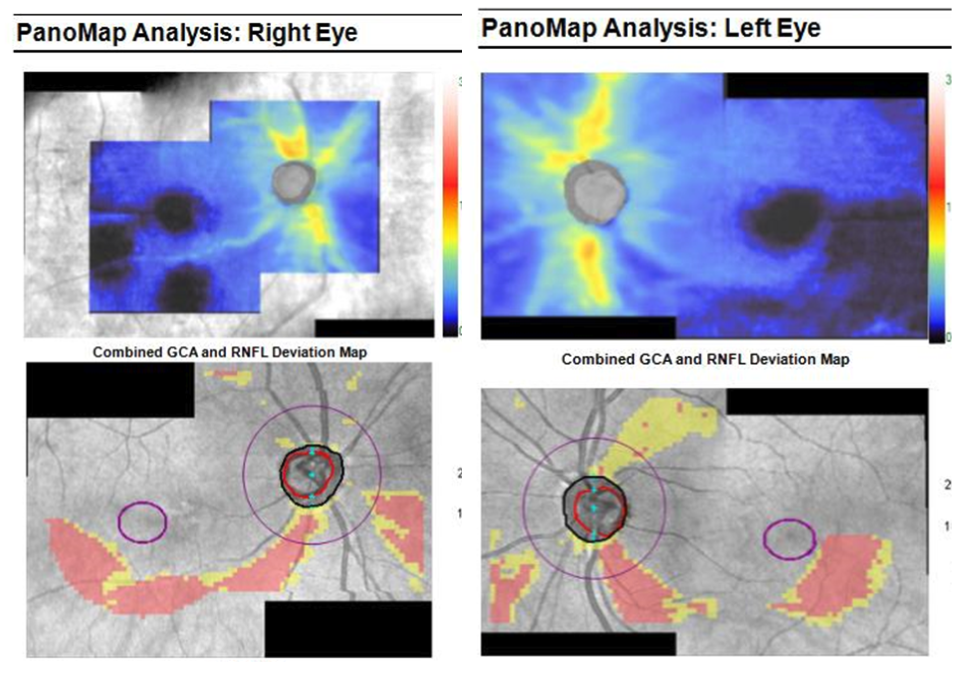 Furthermore, incorporating the HVF with the OCT can give us the Structure-Function Report: 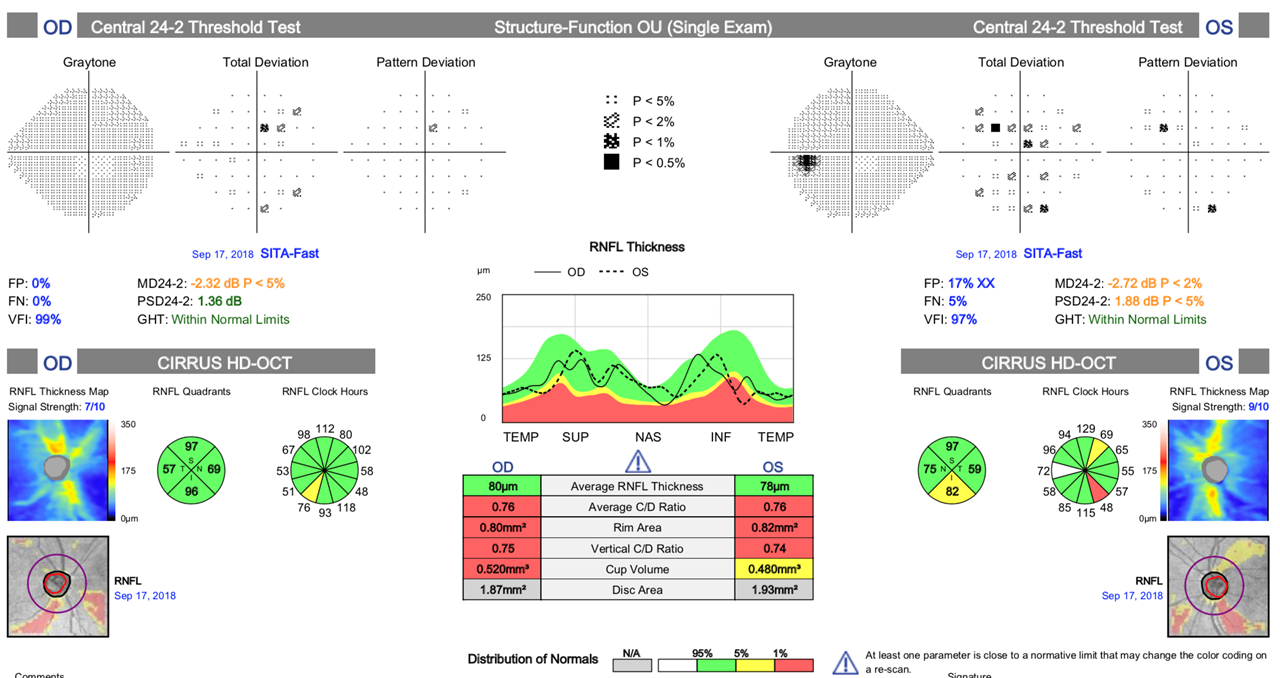 Next is a case where there are abnormal nerves, abnormal OCT, but the HVF 24-2 is normal. An 82 year old Black Male presented for a comprehensive eye examination. His Best Corrected Visual Acuity was 20/25 OD and 20/20 OS. Pressures were 25 OD and 25 OS. Pachymetry was 554 OD and 550 OS. 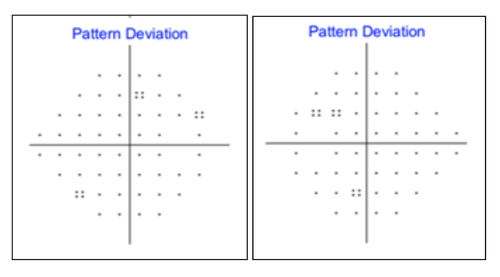 Previously, these central visual field defects were undetectable unless we performed the 10-2 field. This would have required the patient to return for more testing. This case clearly shows that the 24-2C can detect visual field loss not seen on 24-2.

Of course, we need to perform a full comprehensive eye exam and make sure we do not overlook any retinal or macular disease that may be causing visual field defects unrelated to glaucoma. In this case, the patient has both glaucoma and a retinal problem. This is a 61 year old Black Male with a history of Primary Open Angle Glaucoma OD>OS for the past several years. There is a history of trauma to the left eye when the patient was young. IOP without medication was 32 OD and 30 OS. Pachymetry was 555 OD and 550 OS. Visual Acuity was 20/20 OD and 20/20 OS. Pressures were 12 OD and 11 OS on Latanoprost QHS OU and Brimonidine/ Brinzolamide BID OU. Dilated fundus examination revealed the following:

Note the advanced cupping consistent with glaucomatous optic neuropathy. Also note the densely pigmented chorioretinal scar inferior-temporal to the optic nerve head. Here are the associated OCT scans of the RNFL and Macula, showing marked thinning in both eyes: 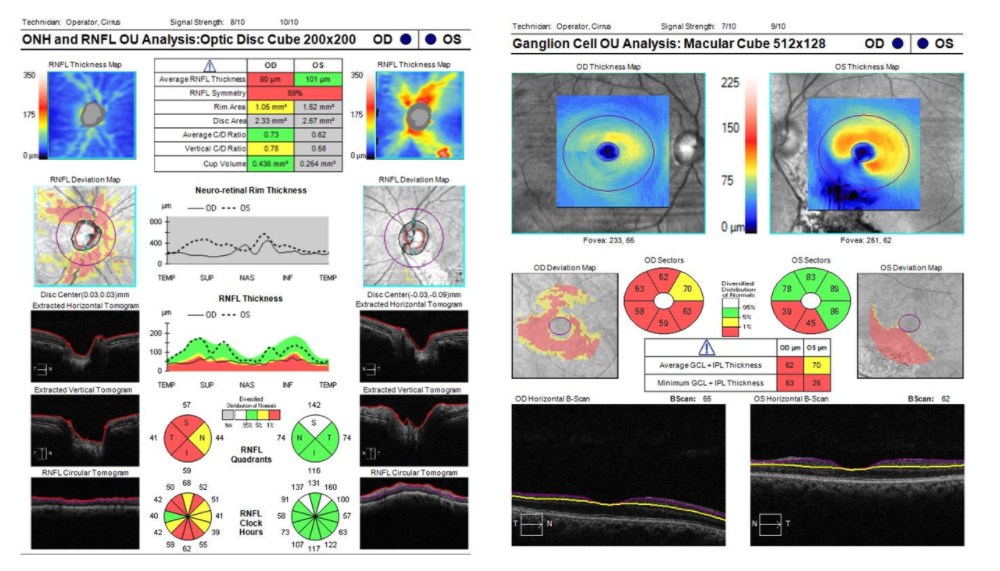 If we adapt the new 24-2C testing pattern with the new SITA FASTER Strategy, we can diagnose glaucoma with much better resolution and save valuable time. Visual fields and the new technologies associated with them can combine with clinical exam and OCT to help diagnose glaucoma more effectively and efficiently.