How to Use Ultra-widefield HD 2.0 True Color Imaging in Full-Scope Optometry

Many indications of ocular and systemic disease are often found within the far periphery of the retina, and conventional imaging tactics can often fall short in capturing these subtle, yet clinically significant findings. This course will cover the use of ultra-widefield HD 2.0 true color imaging in diagnosing and managing ocular disease.

It is understood that many indications of ocular and systemic disease are often found within the far periphery of the retina1. Conventional dilated fundoscopy as well as standard digital retinal cameras can often fall short in capturing these subtle, yet clinically significant findings. This is usually due to one or more of the following reasons:

Taking these factors into consideration and understanding the relationship each variable has with the other, widefield true color imaging technology has successfully been able to capture high-quality images to effectively monitor early and subtle findings of disease and track changes over time by capturing high-resolution images, closely resembling the true appearance of the retinal surface with an expansive field of view.1,2,3 It can also capture fundus autofluorescence (FAF) images with blue, green, and infrared light to more carefully assess specific markers of pathology.

The Zeiss CLARUS 500 has a total field of view of 133 measuring from the center of the eye, which is the equivalent sum of 7 standard fields of view, as determined by the Early Treatment of Diabetic Retinopathy Study (ETDRS)1,2. With 2 automontaged images, the CLARUS spans a total of 200 degrees, allowing for a much greater field of view into the outer peripheral areas of the retina without the presence of eyelash obstructions entering the image2. Figure 1 outlines this below. 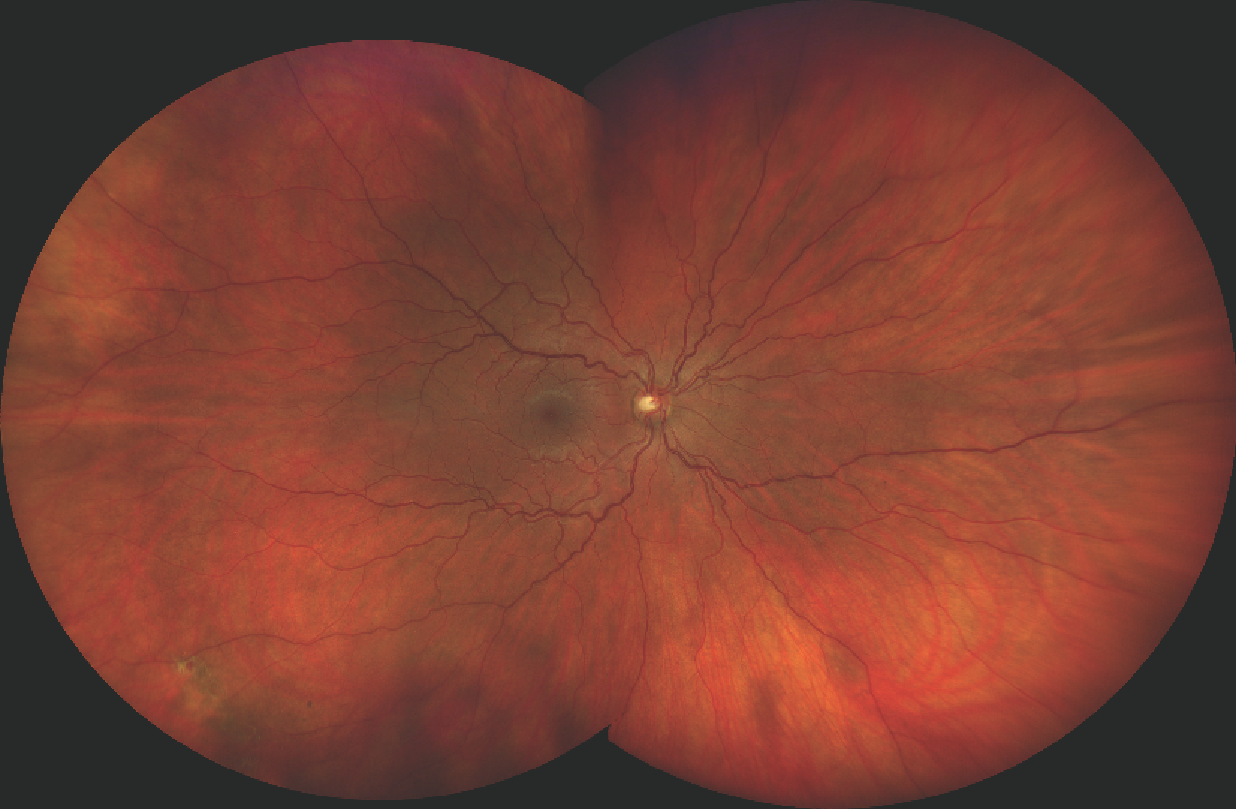 Figure 1: With 2 automontaged images, the CLARUS spans a total of 200 degrees, allowing for a much greater field of view into the outer peripheral areas of the retina.

Fundus autofluorescence (FAF) is a non-invasive imaging technique that detects fluorophores, which are naturally occurring molecules that become excited when they absorb specific wavelengths of light. In return, the fluorophores emit a certain wavelength which is captured by a filter, and collectively, these fluorophores produce a detailed image.2,3,4

The naturally occurring ocular fluorophore, predominantly located in the retinal pigmented epithelium (RPE) layer is better known as lipofuscin. When photoreceptor cells in the RPE begin to breakdown, their incomplete degradation produces a by-product of lipofuscin. The presence and accumulation of this fluorophore is then able to be spatially mapped to determine the cause and the extent of retinal degeneration as commonly seen with:

A normal, healthy fundus will be in a state of isoFAF. A compromised or metabolically stressed RPE will be in a state of hyperFAF, meaning there will be an excess of lipofuscin. However, it is important to note that there are specific structures within the fundus that will hyper autofluorescence, but this is not due to the presence of lipofuscin. These specific structures include the optic nerve head drusen and the sclera. The fundus can also be in a state of hypoFAF for two reasons: The first is that there may be a reduced density of lipofuscin due to RPE atrophy or from a dysfunctional RPE. The second reason may be due to a blocked signal which can be caused by blood vessels, fibrosis, or media opacities (i.e. corneal or lens irregularities).2,3

Currently, much of the FAF literature, especially with regards to AMD research, has been carried out primarily with blue excitation wavelength (435-500nm). There are however some shortcomings to this. For one, the FAF signal released from blue wavelength excitation tends to be absorbed by foveal carotenoids. This can make it difficult to properly image and monitor foveal disease. Secondly, the signal is also absorbable by the lens of the eye. The presence of media opacity results in poorer image quality. Green excitation wavelength (500-585nm) allows for less absorption by foveal carotenoids and media opacities thus potentially making this a better choice for patients with foveal disease. Although both techniques are similar, they are not considered to be interchangeable (see figure 3). The CLARUS 500 allows for FAF to be performed with both blue and green excitation wavelengths.2,3 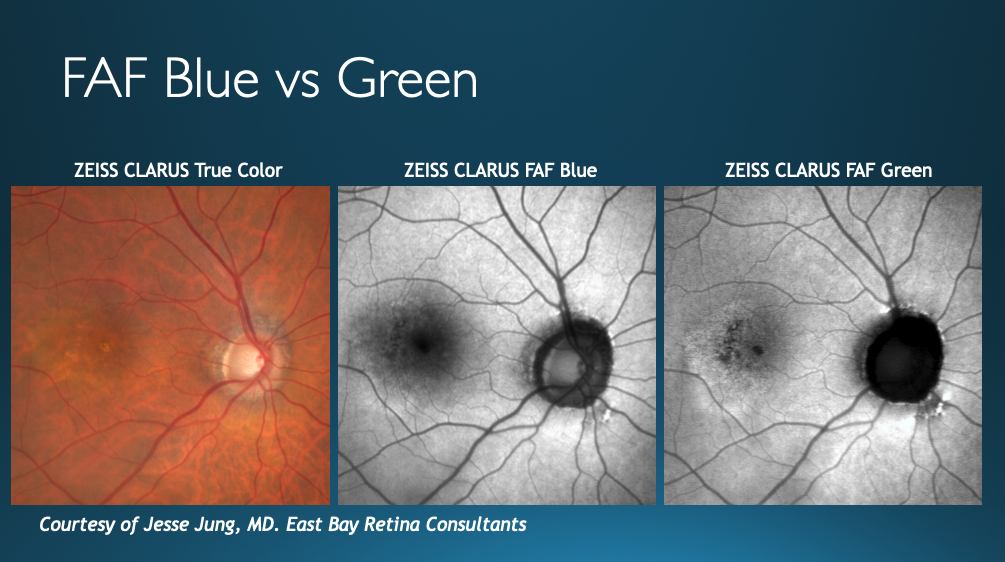 Figure 3: Comparison of a patient’s fundus captured with three different lights (broad spectrum for true color on left, FAF blue in center, and FAF green on right). With FAF Green, foveal details are much more prominent.

Capturing images of the anterior segment with detail can be particularly useful for managing pathologies ranging from mild allergic conjunctivitis cases (figure 4) to more involved cases such as vasculitis with iris synechiae (figure 5).2,3

Figure 4: Anterior segment camera of the Zeiss CLARUS 500 imaging a patient with allergic conjunctivitis in its very mild stage.

Traditional retinal cameras are generally able to capture about 45-50 degrees outside of the posterior pole.3 This can make it difficult to image peripheral lesions that lie outside of this area with standard fundus photography. The CLARUS 500 produces a retinal image that can span 200 degrees wide, thus allowing these peripheral findings to be located and monitored much more easily. This can be especially beneficial to have in one’s practice when there may be more than one doctor involved in monitoring and treating a patient over time.2

This section will demonstrate how true color widefield fundus imaging can be used clinically for peripheral retinal pathology.

On the right-hand side is a picture of a patient’s left eye revealing a chorioretinal scar. Is this scar active or inactive?

The scar in the left eye does not appear to present with any vitritis above it nor does it appear to have any retinal whitening surrounding it, both of which are characteristics of active retinal scars. Thus, judging from the appearance of this true-color image alone, one might conclude that this chorioretinal scar is an inactive lesion.2

Next, a comparison will be drawn for this chorioretinal scar under true-color light versus fundus autofluorescence in figure 7.

Figure 7
By looking at the same image under fundus autofluorescence, there is both hypo and hyper autofluorescence taking place. The blockage of light signal resulting in dark regions is collectively due to pigment hypertrophy and the damage done to the retinal pigmented epithelium as the scar was forming. What is of greater importance here, however, is the bright white areas that surround the scar. These areas of hyper auto fluorescence indicate that this lesion is indeed active, due to ongoing degradation of the retinal pigmented epithelium, hence altering the initial diagnosis that was a stable, inactive scar. This demonstrates the importance of fundus autofluorescence in monitoring the severity of retinal pathology with greater precision.2

39-year-old Caucasian female, who has never had her eyes dilated. She reports no history from prior eye doctors. She denies any systemic conditions. 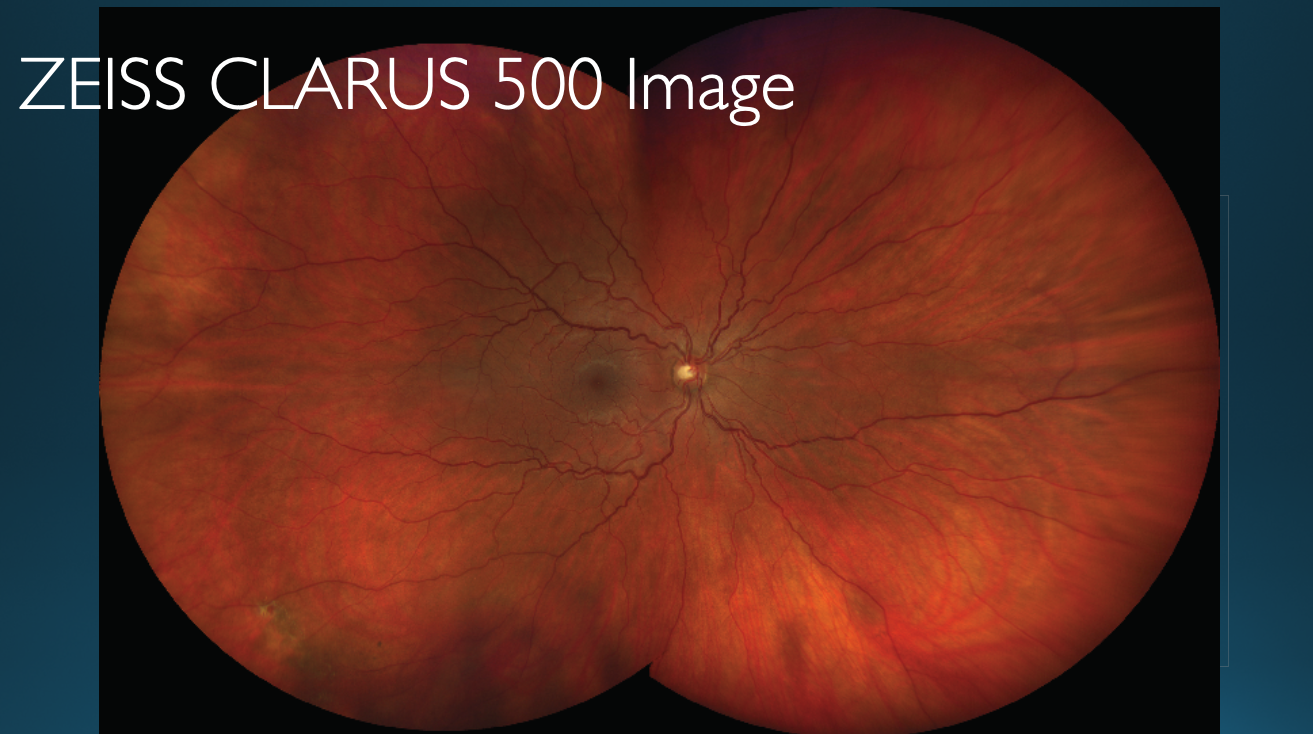 Figure 8 shows the photo of the patient’s right eye taken with the ultra-widefield camera and reveals a small atrophic retinal hole in the inferior temporal quadrant of the retina.2,3 Though this hole may not be of major concern given the way it presents, it is still important for documentation and monitoring purposes. This lesion would have had a high chance of being missed with standard fundoscopy and perhaps most other capturing technologies. Due to the expansive field of view, the far periphery was able to be captured.

55-year-old, Caucasian female, presents as a new patient that has been under the care of her sister-in-law and has recently moved. The patient reports a birthmark that was being followed by her prior doctor. The patient reports no other complaints and her medical and ocular history were normal. 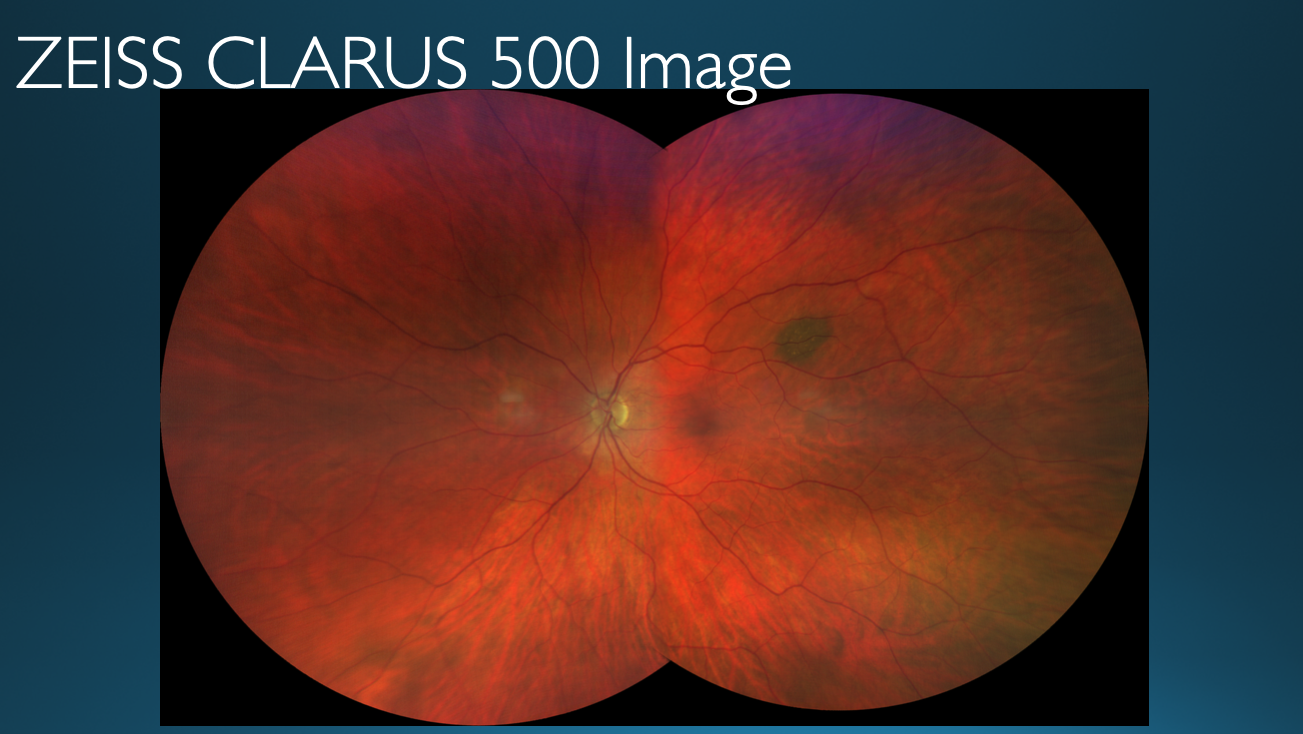 Figure 9: A choroidal nevus is seen in the upper temporal quadrant of the patient’s left eye 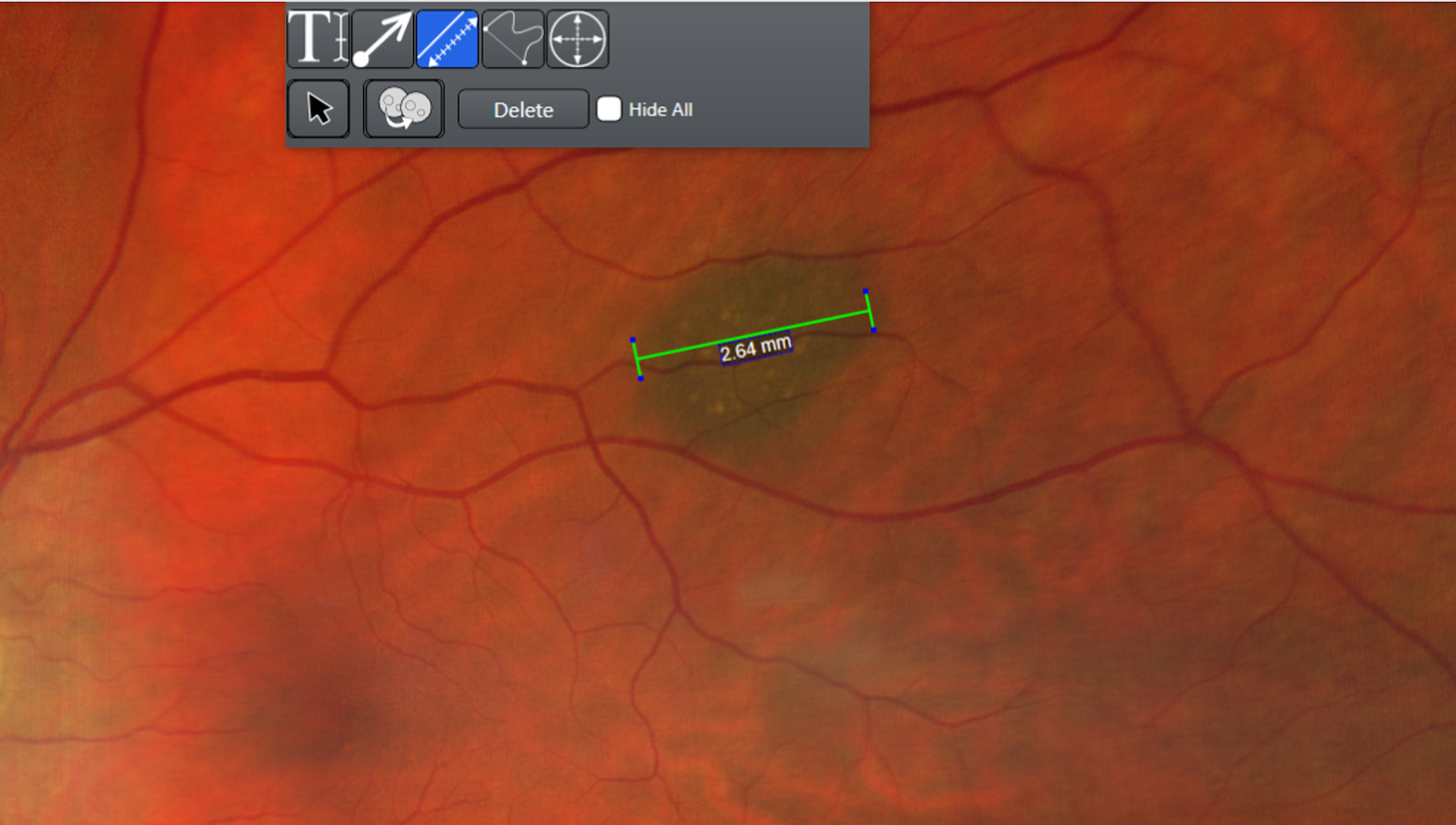 Allow for lesion measurement. Using the caliper function, a measurement can be taken to determine the size of a retinal lesion. This patient’s choroidal nevus measured out to be 2.64 mm.