How To Ship Your Car as an Optometrist or Optometry Student

For me, the biggest pain of moving around the country for first optometry job was getting my car from place to place, and I’m sure that other ODs might feel the same. 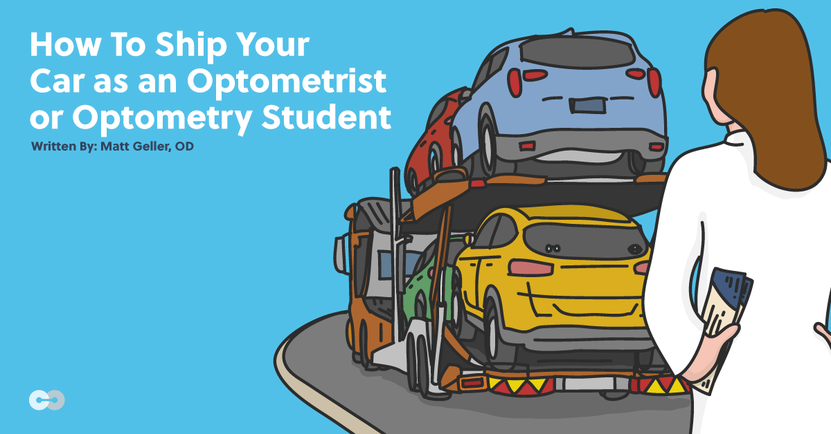 If you’re reading this, you might be faced with a situation where you need to ship your car for your initial trip to optometry school, fourth-year externships and rotations, or even for residency. Also, if you’re relocating after optometry school, like I did, you’ll need to consider this as well.

My story and why I had to ship my car

For me, I moved around a bit for optometry school and externships, but since I did not do a residency I didn’t have to worry about that. All of that moving in less than five years would have been much more difficult if I needed to drive my car across the country each time. Instead, I decided to ship my car during my moves, which allowed me to focus on the rest of my move as well as relax on a flight. This might be the right call for you as well.

I was already living in New York at the time I went to optometry school, so I didn’t need to ship my car to SUNY. Plus, I didn’t really need a car in Manhattan, so I just left my car at home in Long Island. Later on in optometry school, I did a rotation at a Vision Therapy practice in Los Angeles, but that was only for three months so I decided to rent the cheapest car I could find.

When I finished up fourth year at SUNY, my wife and I made the decision to start a new life in San Diego, California, and so we had to ship our cars out there. There was no way we were driving, since we both had to start working and couldn’t rationalize spending all that time on the road. This meant we had to ship both our cars from Plainview, New York to San Diego, California and we chose RoadRunner Auto Transport to get it done.

My review of RoadRunner Auto Transport

I give RoadRunner a 10 out of 10 and I couldn’t be more pleased with my outcome. The process was simple—which is exactly what I needed. I was preparing to work as an optometrist for the first time and just did not need the stress of driving three thousand miles preceding that, nor did I want to deal with annoying back and forth phone calls, endless paperwork, or high prices—I mean, I was a broke graduate student, so I really wasn’t asking too much to have a hassle-free experience!

I went to RoadRunner’s website, got a quote in less than a minute, and booked my shipment just a few moments later. If you’re curious about my personal car shipping cost, the whole thing cost me just a thousand bucks and a similar price for my wife’s Volkswagen truck. Shipping my car saved me about six days of driving, the cost of gas, and the cost of lodging along the way. Not to mention the fact that my wife and I both had leased cars, and didn’t want to rack up the miles that would cause us to go over and need to pay more.

The day of the pickup was even easier than I thought it would be. The auto transport driver gave me a quick ring on my cell to let me know that he would be arriving in just over half an hour. Thirty-five minutes later, he was loading my car onto the carrier. After that, he left for the trip. I got on a plane two days later. I arrived in San Diego and moved into my new place. A few days after that, my car was dropped off without a scratch on it and within the timeframe that was promised to me back when I got my free quote.

Since I moved to San Diego, my two business partners shipped their cars from Long Island to San Diego and from Pennsylvania to San Diego with RoadRunner. They each had a great experience and referred their friends to the company as well.

If you’re an optometry student, optometrist, or really any healthcare professional, you should keep in mind that there’s a chance you’ll be moving around a lot when you start school, when you go on your rotations or externships, if you do a residency, and when you finally relocate to start working. You need to keep in mind not only your costs of all this moving—including your car, of course—but also your opportunity costs of sitting behind the wheel for thousands of miles. Shipping your car is often a great alternative. If you choose that route I would consider RoadRunner Auto Transport since they’ve done a great job for me and our team!