Here's the Easiest Way to Test for an Afferent Pupillary Defect 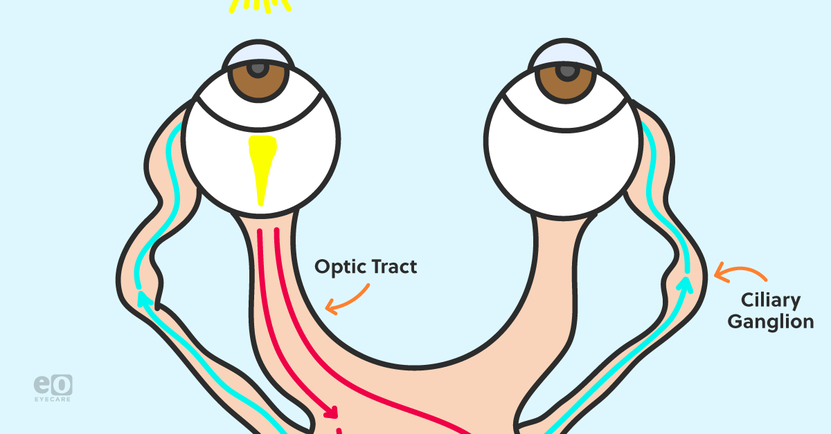 An RAPD can be caused by several conditions that affect the optic nerve and retina and it is important, as a clinician to not only correctly identify an RAPD but to connect that RAPD to other clinical data for an accurate diagnosis.

RAPD stands for relative afferent pupillary defect and is also known as Marcus Gunn’s pupil. Essentially, RAPD describes the difference in reaction of one pupil versus another in response to light. The difference is due to a problem with the afferent light pathway, which can be related to the pathology of the retina, the optic nerve, or the optic tract. Measuring the extent of the diminished response can also provide clues as to the extent of the damage.

In literature, and clinical practice, RAPD, and APD, or afferent pupillary defect, may be used synonymously. However, RAPD is technically describing the relative response of one pupil so there is no such thing as bilateral RAPD and, for a RAPD to exist, the damage must be asymmetric between the eyes. In contrast, a patient who has symmetrical retinal or optic nerve damage may present with a bilateral APD with both pupils showing minimal reaction to light.

A review of the light reflex pathway

The efferent pathway begins at the pretectal nucleus, which will stimulate the ipsilateral and contralateral Edinger Westphal nucleus. From there, the fibers will travel alongside their respective oculomotor nerve to the ciliary ganglion. From there, the short ciliary nerve will communicate with the iris, causing the iris to constrict. 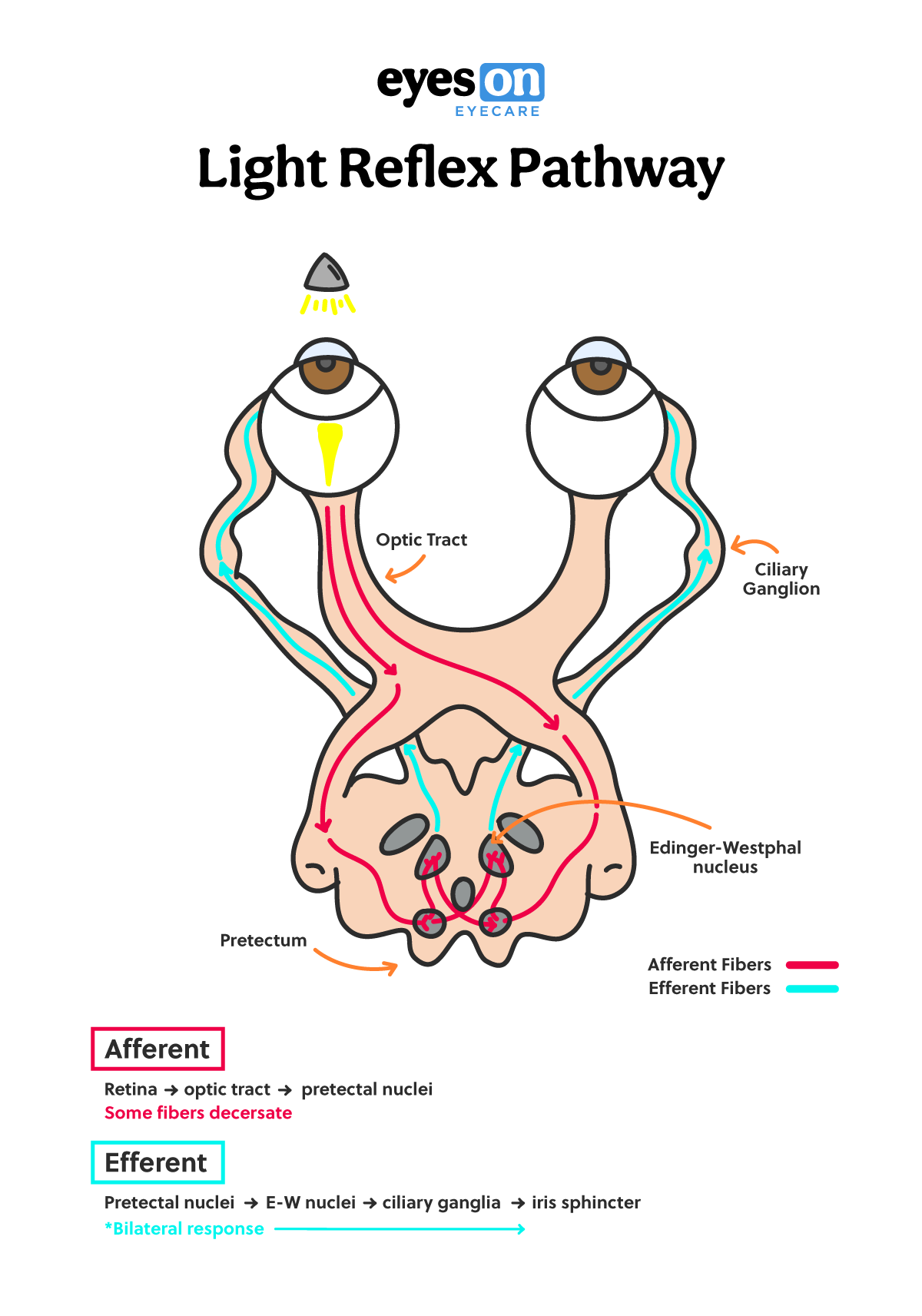 RAPD has many potential causes both within the eye and within the optic nerve pathway. These include:

Optic neuritis: This is an inflammation of the optic nerve that can be due to several conditions, including multiple sclerosis.

Severe glaucoma: Cases of severe glaucoma may present with an RAPD if the glaucomatous damage is asymmetric between the eyes.

Optic nerve damage: Damage for the optic nerve from toxicity and other causes will likely result in an RAPD if the damage is asymmetric between the eyes.

Severe retinal disease: Diseases that cause severe damage to the retina such as herpetic retinopathies and cytomegalovirus-related retinopathy can cause an RAPD if the damage is asymmetric between the eyes.

Brain lesions: Brain lesions that affect the afferent pupillary pathway can also cause an RAPD.

How to perform the swinging flashlight test to measure RAPD

The swinging flashlight test is a traditional way to measure RAPD:

Start with dim room illumination. Traditionally, the direct response and consensual responses of each pupil will be tested prior to performing the swinging flashlight test. Once direct and consensual responses are checked. Start with one eye and then swing your light source to the other eye. You want to wait about three seconds before switching between eyes; thinking of it as a three-count that’s used when dancers learn to waltz can help you avoid moving too fast.

If both pupils are constricting equally, there is no RAPD. However, if you notice that the pupils seem to dilate between swings or constrict less with one eye versus another, an RAPD is present.

Quick note: If you notice the pupil constrict and then very slightly dilate and then constrict again in a spasming motion, this is a normal response called the hippus. 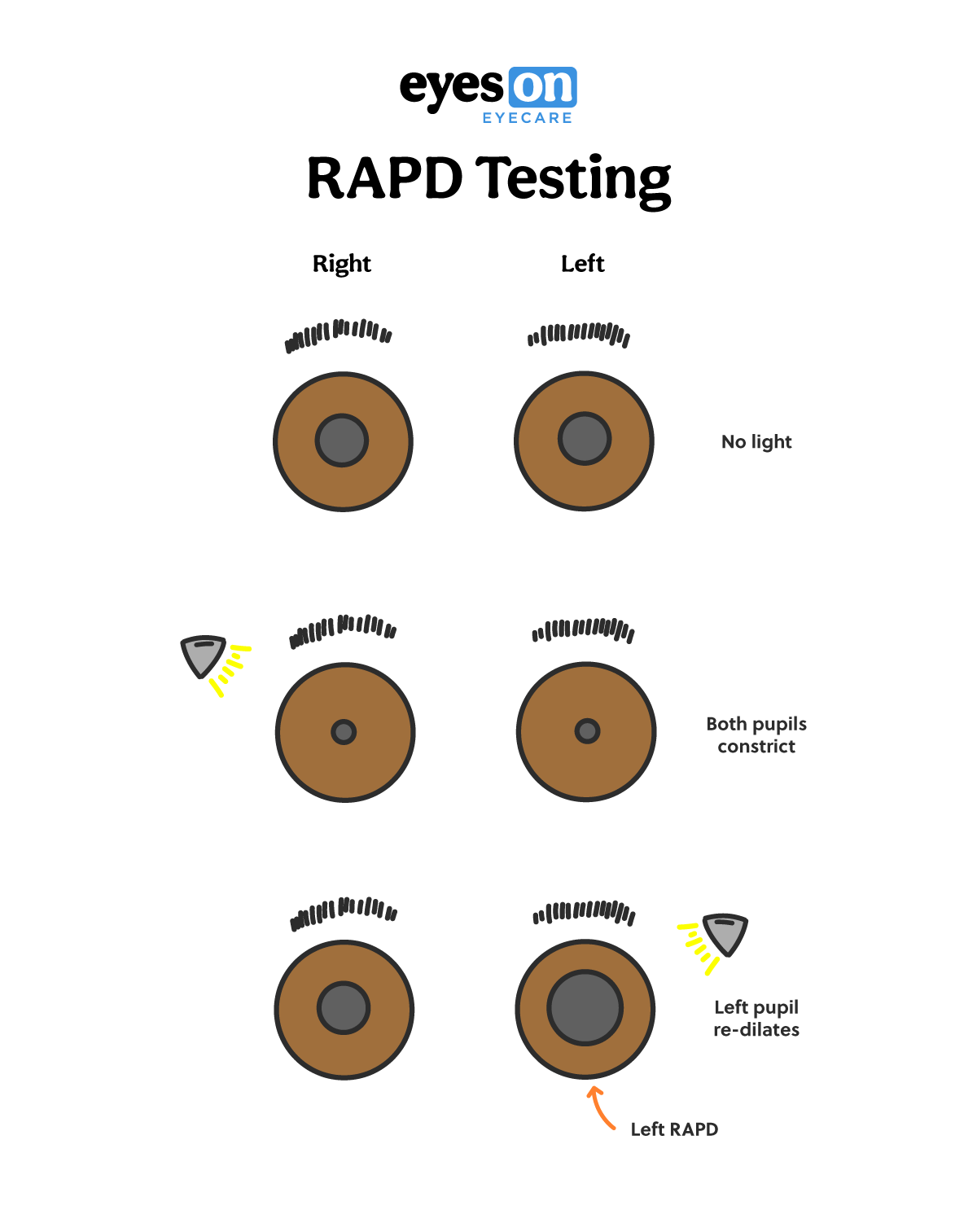 Some patients come in with an efferent pupillary defect, meaning that the pupil is unable to constrict either due to damage to their iris sphincter, synechia, a third-nerve palsy, and other problems. In this case, the reverse RAPD test can still help you identify an RAPD.

How to perform the reverse RAPD test 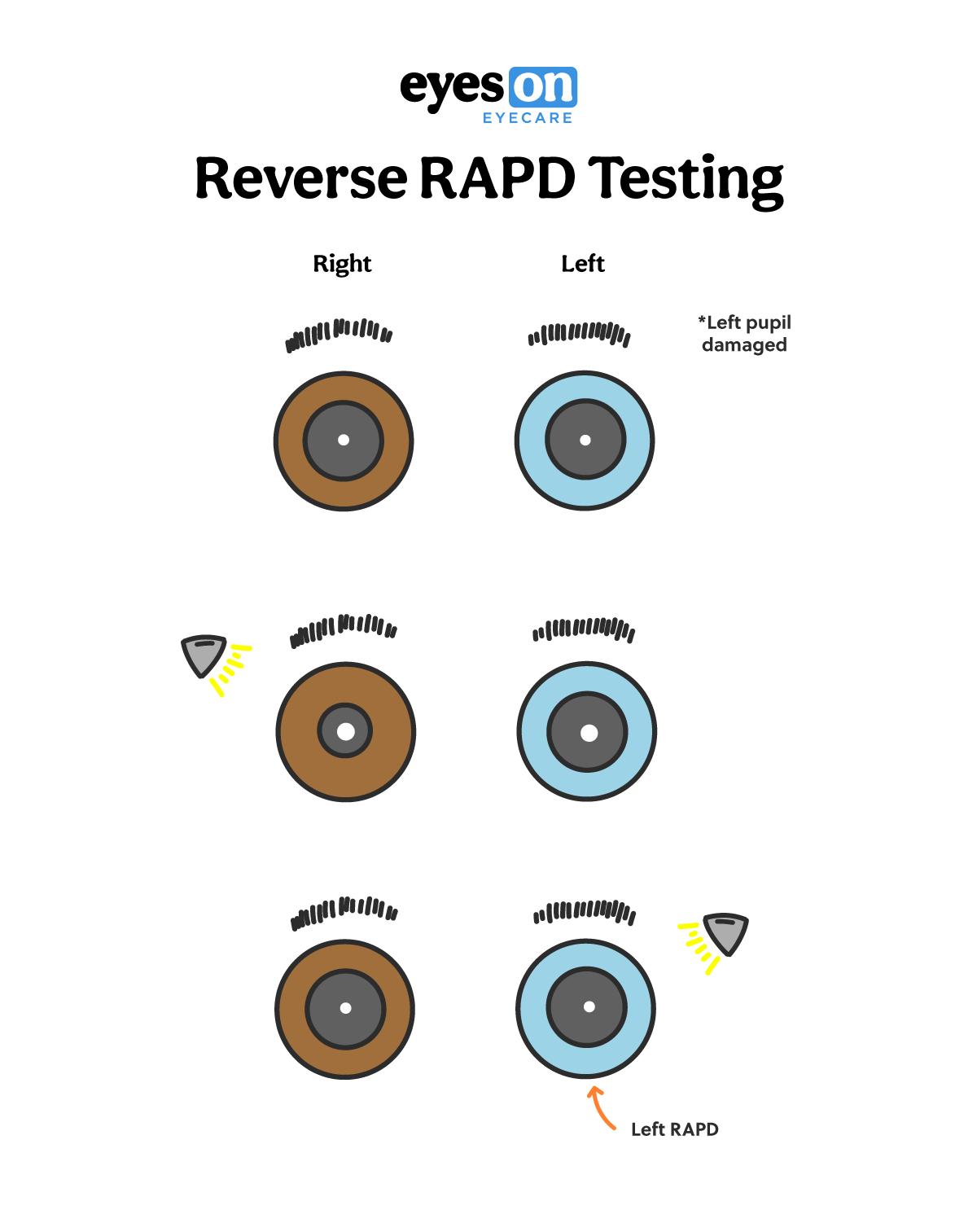 Here are a few tips for detecting an RAPD:

Give Yourself Enough Light

While RAPD testing should be done in dim lighting, you do need to see the pupils move, especially if you are performing reverse RAPD Testing. Shining a BIO light vertically up on the patient’s face (on dim setting) can help provide sufficient light during reverse APD testing.

A light source that is too dim or too diffuse will cause the pupil to constrict less. Using a good penlight or transilluminator will ensure that you’re getting a good reflex.

Check Out the APD Tester

The APD Tester makes it easier to visualize and quantify an RAPD by allowing you to view both pupils simultaneously under magnification. The device was invented by Babak Kamkar, OD, and is manufactured by Good-Lite.

Relative afferent pupillary defect testing focuses on the afferent light pathway and can play an integral part of clinical testing. In the event that the patient presents with efferent pathway damage, monocular RAPD testing can still be performed to rule out an afferent defect. When in doubt, remember that pupil testing should be taken in context with your other findings to help you arrive at an accurate diagnosis.

I'm a fourth-year optometry student with aspirations of practicing in California and, one day, earning a fellowship with the American Academy of Optometry. Some of my optometry-related interests include contact lens, anterior segment disease (including dry eye), posterior segment disease, … 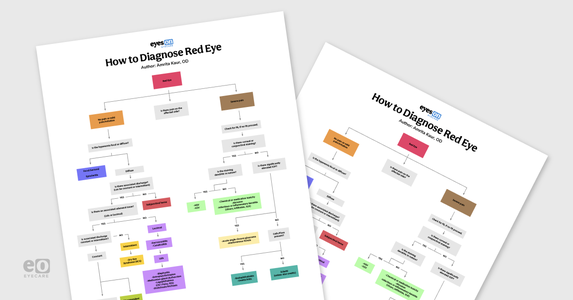 How To Diagnose Red Eye - with Downloadable Flowchart 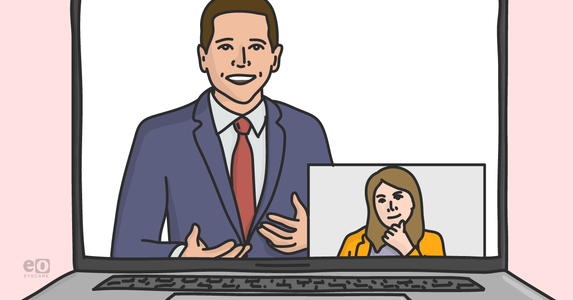 How to Crush the Ophthalmology Residency Interview 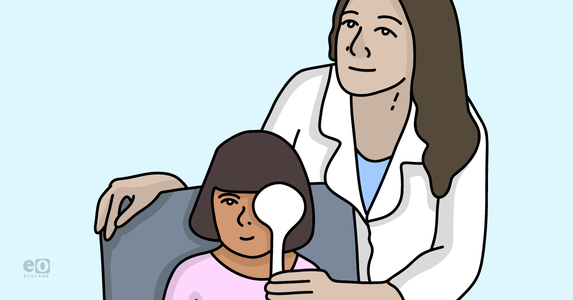 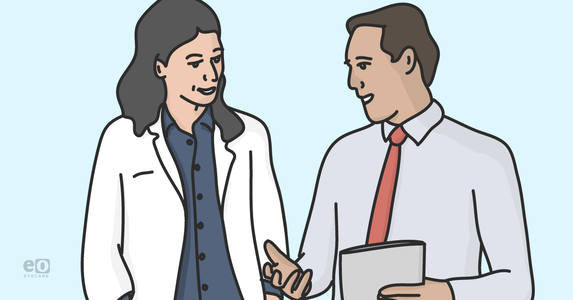