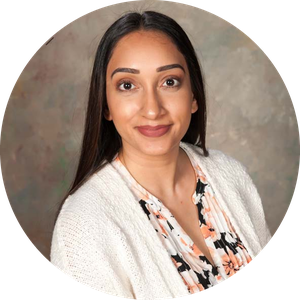 Historically, glaucoma progression was determined by evaluating the optic nerve in real-time and comparing it with previous fundus photography. The decision would then be made if the most recent picture indicated any change over time. Alternatively, practitioners would use visual field print-outs and inspect each field carefully to identify any flagged areas of field loss over time.

As the years went by, new developments came about to provide a better analysis of disease progression. Computer software has improved to where we can now identify clinical structural changes in microns long before the patient may experience any functional loss. The ZEISS CIRRUS RNFL OCT, Macula GCL/IPL OCT, and ZEISS HFA are clinical tools that provide a Guided Progression Analysis (GPA) report to highlight general and focal areas of progression in glaucoma patients over time.

Detecting change is important for patients diagnosed with glaucoma or as glaucoma suspects. This is a difficult task in itself, requiring periodic tests performed over years as change can occur anywhere in a patient’s lifetime. However, it becomes more difficult if you do not know how to appropriately interpret the analysis reports from these tools.

In the initial steps of glaucoma management, identify the stage of the disease. This will help to calculate their risk for progression, in addition to other factors1 such as:

Any glaucomatous progression may be measured by structural changes of the retinal nerve fiber layer (RNFL) at the optic nerve head and ganglion cell layer (GCL) at the macula using optical coherence tomography (OCT), or by functional changes noted as visual field deterioration using the Humphrey Field Analyzer (HFA). After you’ve established an appropriate baseline to be able to monitor for changes, the best method to detect progression will vary depending upon the disease stage.

The Glaucoma Continuum, illustrated by Dr. Weinreb and colleagues,2 demonstrates that structural change often precedes functional change in the life span of the disease. Therefore, it makes sense that an OCT will detect structural changes to optic nerve head RNFL and macular GCL several years before visual field defects appear on the HFA. The average macular GCL thickness loss has shown to be detectable in all stages of glaucoma,3 therefore it may be beneficial to use GCL OCT longer than expected when compared to RNFL OCT. 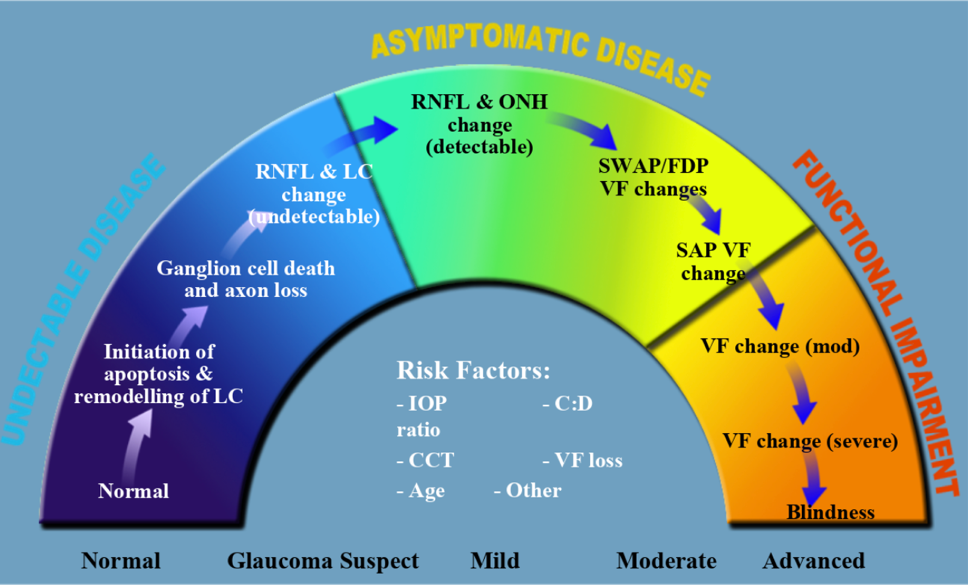 Figure 1. The Glaucoma Continuum, presented in an article by Dr. Weinreb and colleagues in the American Journal of Ophthalmology (Vol 138, Issue 3, Sept. 2004), shows the progression of glaucoma from undetectable to asymptomatic to functional impairment.

As the patient reaches the moderate to severe stages of glaucoma, they would have likely lost a significant amount of average RNFL thickness, leading to a “floor effect” on the OCT scan. Within the RNFL, the nerve fiber layers damaged from glaucoma comprise about 60% of the overall structure, while the remaining 40% include glial and other structural tissue that often remains.4

The average RNFL thickness will never reach zero, but rather halts to roughly 55-60um which is known as the floor effect. Structural changes on RNFL OCT scans will no longer be detectable on future imaging after this point.

As our patient transitions into the moderate stage of glaucoma, when should we expect visual field loss to develop? An article by Wollstein et al. performed a cross-sectional study5 to determine the average RNFL thickness at which VF damage becomes detectable and associated with structural loss. They identified a tipping point in which there is a statistically significant steeper decline in VF loss when the average RNFL thickness reaches 75um or less from age-matched normative value.

Substantial structural RNFL loss of 17%, or an average RNFL thickness of roughly 75um, appears to be the tipping point for functional visual field loss to be detectable.5,6 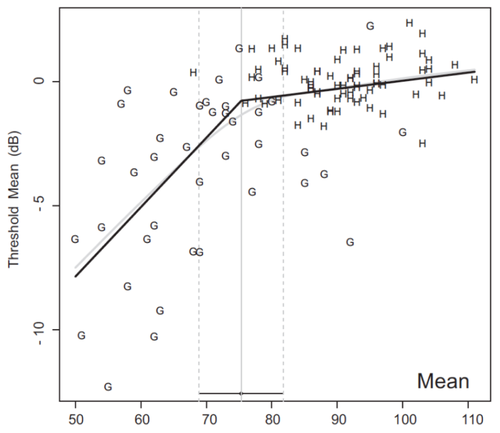 Here is an example of a patient with significant RNFL loss on an OCT scan in 2011. Focusing on the left eye, the average RNFL thickness falls below 60um and there are correlating VF defects on the 24-2. 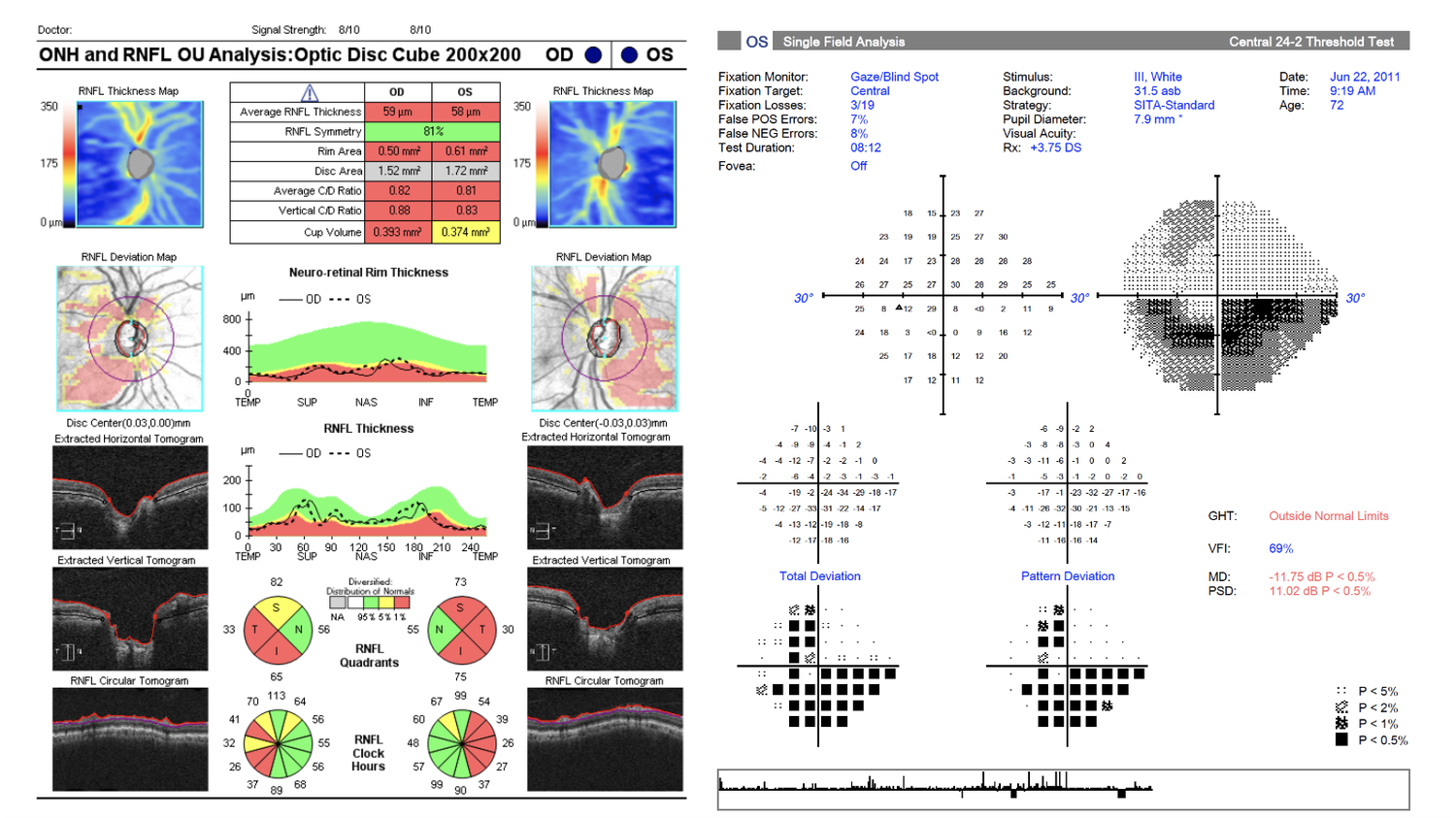 As we monitor glaucomatous changes overtime between 2011 and 2016, notice that the average RNFL thickness in each quadrant plateaued as it reached the “floor effect”. We would not expect the RNFL thickness to decline any further, however, the patient’s visual field loss continued to decline significantly based on the 24-2 results. 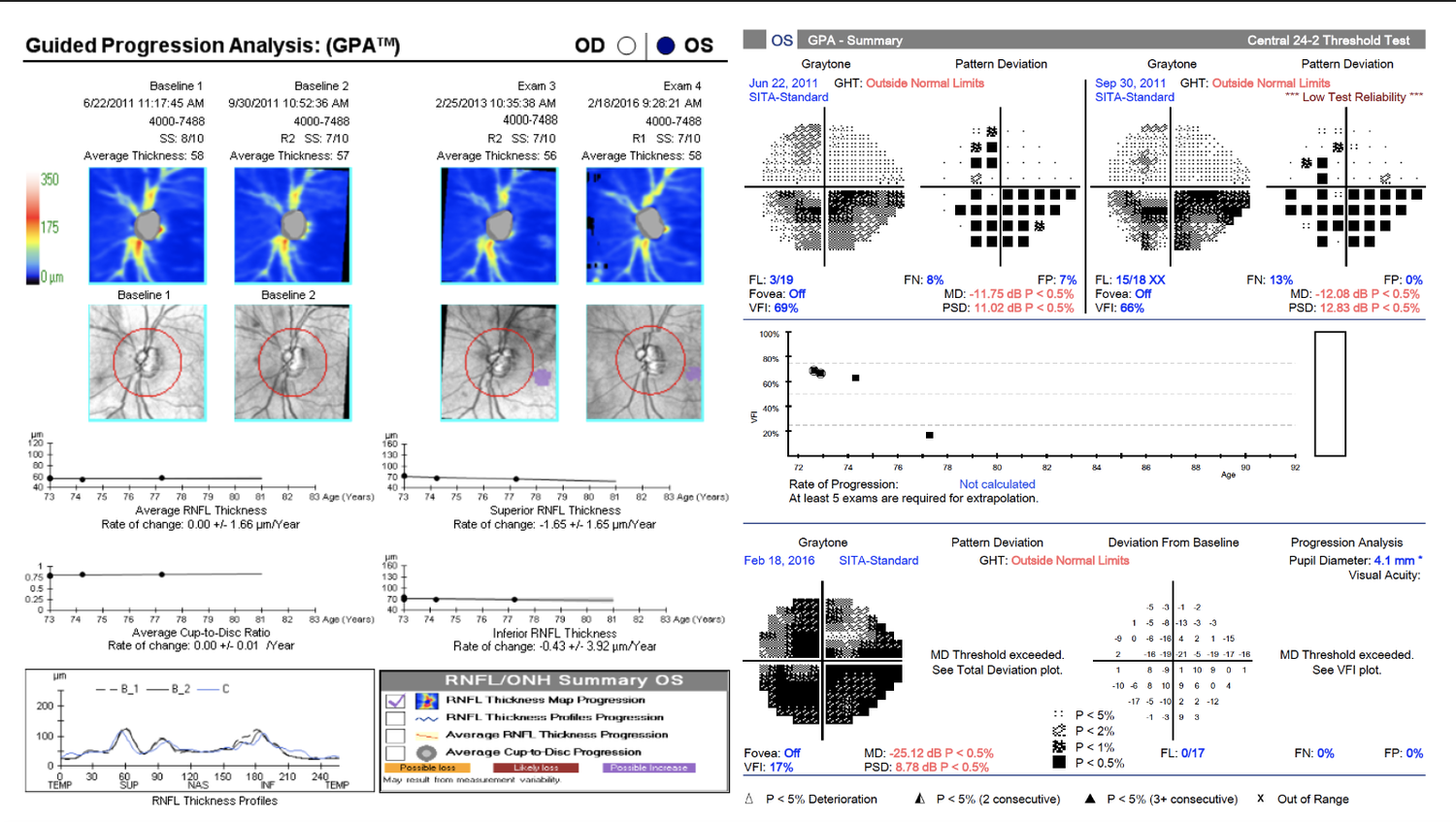 This case is a great example of why monitoring for VF overtime is crucial once the average RNFL thickness has reached the floor effect.

Make sure to eliminate any bad quality scans with artifacts from the data to give you the most accurate and reliable information on GPA.

Another measure of progression from the GPA report is the event analysis (figure 3). This evaluates change compared to the baseline on a point-by-point basis over consecutive tests. The benefits of event analysis include: 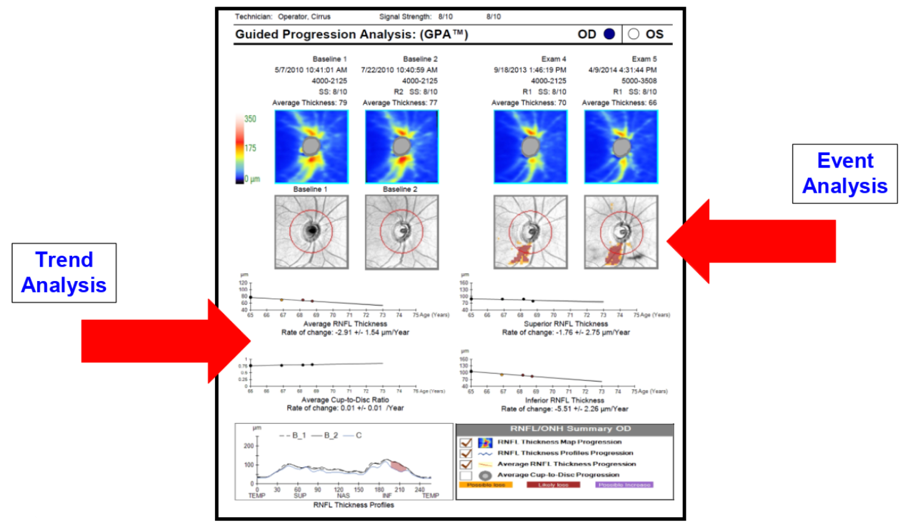 Always pay attention to both the trend and event analysis together because one may not show as much glaucomatous change compared to the other.

RNFL and GCL GPAs require two baseline scans before they can begin to interpret changes over time. The trend analysis measures overall rate of change per year by plotting a regression line for the following parameters:

The slope for each plot will continue beyond the present data to provide you with an estimate of expected RNFL or GCL loss during the next four or five years if the patient continues the current treatment plan to slow down progression.

Keep in mind that age-related average RNFL loss naturally occurs at a rate of -0.52um per year, and -1.35um to -1.25um per year in superior and inferior quadrants, respectively.7,8 The age-related decline in macular GCL+IPL thickness is -0.32um per year. In a glaucomatous patient, significant change is usually two to three times greater.

The event analysis (figure 3) is a color map that highlights focal areas of significant change within the RNFL or GCL compared to baseline and consecutive tests. Yellow codes for any change that is greater than the test-retest variability, basically saying there is possible loss. Red codes for confirmed changes on a follow-up scan where there likely has been loss over time. Be careful with the event analysis as artifacts can appear red as well. Pay more attention to focal areas of damage in certain quadrants that commonly occur in glaucomatous disease.

Lastly, the RNFL GPA provides a TSNIT progression graph on the lower left corner (figure 3). This graph monitors for significant changes in any given quadrant and highlights progression in:

Figure 3 (duplicated). The RNFL GPA report for the right eye. Two baseline tests are shown on the top left, and the two most recent tests are shown on the top right. The thickness maps with focal shaded areas of yellow and red are developed by the event analysis. The four plots in the middle are developed by the trend analysis. The TSNIT progression graph is in the lower-left corner. 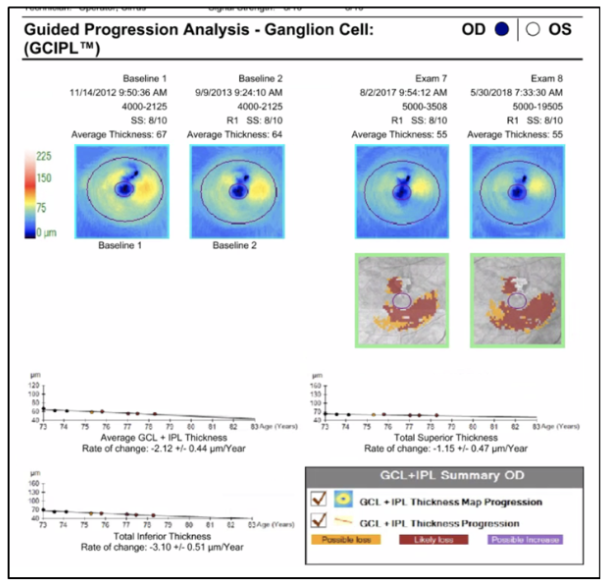 Figure 4. The GCL GPA report for the right eye. Two baseline tests are shown on the left, and the two most recent tests are on the right. This report has a similar structure to the RNFL GPA.

HFA GPA requires two baseline scans before it can begin to interpret changes over time. The trend analysis measures the overall percentage rate of change per year by plotting a regression line for the Visual Field Index (VFI). The VFI percentage is calculated by the HFA to quantify the patient’s visual function, or quality of vision.9 Clinicians often strive to keep the patient’s VFI above 50-60% in order to preserve functional vision.

On the HFA GPA, rates of progression that put patients at higher risk of visual disability are often greater than 1.5% VFI per year on the trend analysis.

The slope for the trend analysis also gives a prediction of future progression over the next five years if the patient continues the current treatment plan to slow down progression.

The event analysis uses triangular points to highlight focal areas of significant change within the visual field compared to baseline and consecutive tests. The half-shaded triangles appear in locations that show significant deterioration over two consecutive tests, while the full-shaded triangles appear over three or more consecutive tests. Again, pay attention to any field tests that may have artifacts, as these may show on the event analysis. Focus on areas of the field that are typically affected by glaucomatous damage to look for change. 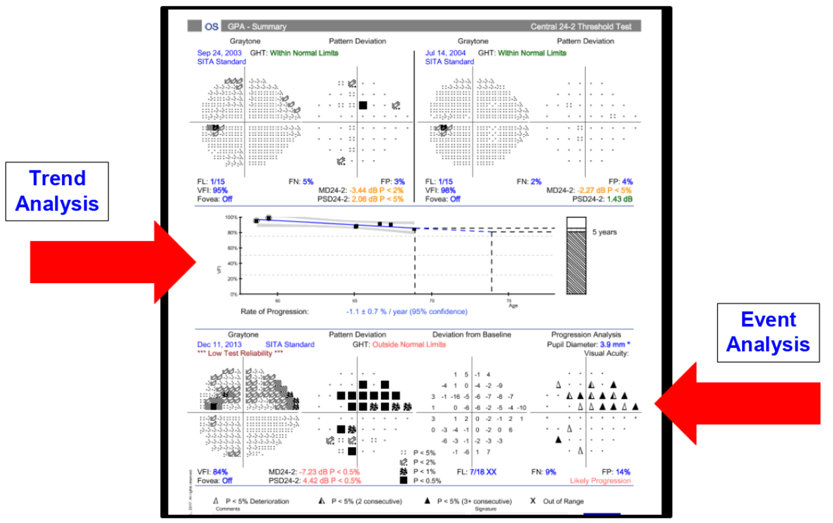 Figure 5. The HFA GPA report for the left eye. The first two baseline tests are shown at the top, and the most recent test is shown at the bottom. The VFI plot in the middle is developed by the trend analysis. The event analysis is in the lower right corner.

Cases demonstrating the importance of the HFA GPA summary report

Patient #1 has two baseline VF tests in 2006 and 2007. The most recent test was performed in 2018. The trend analysis shows a slow and stable rate of VF progression at -0.3% overtime. The event analysis plot on the bottom right does not show any progression within the area of the local inferior nasal VF defect. Over a span of 12 years, this patient shows a stable local defect and can likely continue their current treatment plan. 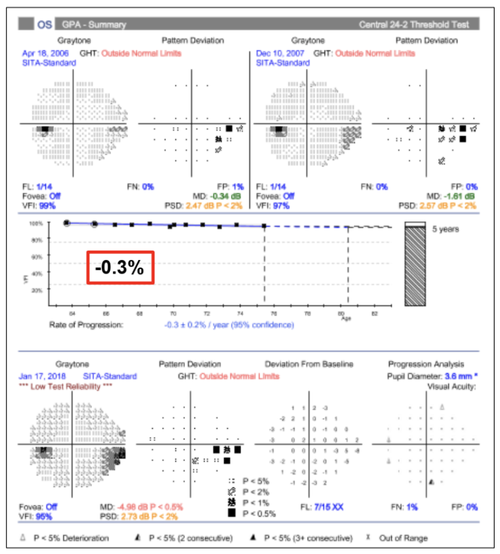 Patient #2 has two baseline VF tests in 2009 and 2012. The most recent test was performed in 2017. The trend analysis shows a significant rate of VF progression at -3.3% overtime. The event analysis plot on the bottom right shows progression within the area of the superior nasal arcuate defect. Over a span of eight years, this patient shows a rapidly progressing defect. Visual field loss in this patient is quite worrisome as the progression points are very close to central fixation, and appropriate management must be determined in order to preserve as much vision as possible for the patient to remain functional.