Fundus Photography: What You Need to Know | Eyes On Eyecare

Fundus Photography: What You Need to Know

In this course from Daniel Epshtein, OD, learn the ins and outs of fundus photography for ocular disease management.

What is fundus photography?

Of all the diagnostic imaging modalities out our disposal, fundus photography may seem to be the most basic. Fundus photography aims to replicate what we already see with our funduscopic exam, but it can provide more than just photographic documentation. Fundus photography can improve detection, patient education, and office workflow, helping optometrists provide high quality and efficient care to their patients.

Standard fundus photography uses a high-resolution camera and a focusing system to take images of the posterior pole. These systems try to replicate what practitioners see with funduscopy, thus a similar white light source is used. This makes interpretation of fundus photographs intuitive and future comparisons to funduscopic views simple. Analyzing the three color channels (blue, green, and red) of a color image can help to localize a lesion.

Most eye care professionals tend to order 45°-50° images centered on the fovea. This allows one to visualize the macula, optic nerve head, and retinal nerve fiber layers in one image. Some instruments also allow the operator to decrease the angle of view to 35° or 20° to improve resolution; this can be used when small or focal lesions need to be imaged with increased clarity. Most fundus cameras can vary the fixation target position and help image the midperiphery as well. These images can then be stitched together to create a larger mosaic image.

Figure 1: To the left, a standard 50° centered on the fovea. To the right, the same eye but the image is centered on the optic nerve head and the angle of view has been decreased to 35°. Imaged with the Topcon Mydriatic Camera

Newer models of fundus cameras allow for much larger areas of the retina to be imaged. Though there is no standardized nomenclature, widefield and ultra-widefield photographs commonly refer to 100° and 200° angles of view, respectively. These systems often use lasers or LEDs to image the retina, in contrast to conventional fundus photography which uses white light. This difference in light source can create issues with image interpretation because some posterior segment structures might differ in appearance when compared to white light views. Newer widefield systems such as the ZEISS CLARUS 500 and EIDON offer “true color” imaging which more closely simulates how clinicians view the retina and optic nerve head.

Ultra-widefield systems can image a significant portion of the retina, allowing clinicians to monitor peripheral lesions that could not be clearly imaged with standard fundus photography. Photodocumentation of peripheral lesions such as lattice degeneration, retinoschises, atrophic holes, or chorioretinal scars simplifies follow up management, helping ensure that there are no pathological changes evident.

A quick review of images prior to the dilated fundus exam can help highlight any abnormalities that need extra attention, effectively guiding the course of the exam. Allocating more time to pathology and less time to normal retina can help streamline the examination without compromising thoroughness. This is especially helpful in photophobic patients in whom the window to visualize the retina may be very small. 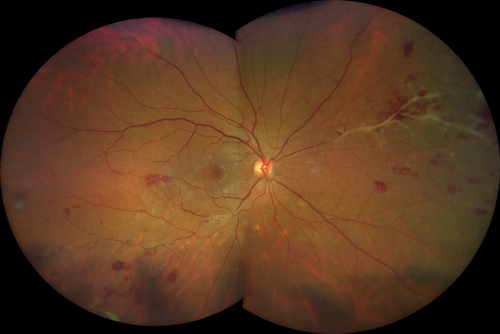 Figure 2: A 200° image of a patient with vasculitis and anterior uveitis imaged with the CLARUS 500. The patient was very photophobic and could not sit through more than a few seconds of funduscopy at a time.

Being able to decrease inter-observer and intra-observer variability can prevent disagreement in clinical management, especially when a patient is seen by multiple doctors within a practice. This all improves patient outcomes and reduces patient anxiety and frustration across the board.

Fundus autofluorescence (FAF) uses a combination of barrier filters and excitatory wavelengths to image lipofuscin and other fluorophores with the retina. Lipofuscin is found in many cells within human tissue, including the retinal pigment epithelium (RPE). Lipofuscin is naturally found in RPE cells but outer retinal degeneration can alter the concentration of lipofuscin in RPE and the surrounding tissues, leading to pathogenic changes that can be visualized with FAF.

Figure 3: To the left, a true color 100 image of a seemingly inactive chorioretinal scar. Vitreal debris can be visualized temporal to the macula. To the right, FAF reveals hypo-autofluorescence corresponding to RPE atrophy with a surrounding hyper-autofluorescent ring, suggestive of an ongoing pathological process. Three weeks later this lesion reactivated.

The smartphone has become a generation-defining technology and is now creeping into the ophthalmic space as well. Due to advances in camera technology, it is now possible to take great images of the posterior pole with just an indirect ophthalmoscopy condensing lens and a cellphone. There are also some adapters such as the Volk iNview that help streamline this process further. This technique is especially useful for offsite examinations, wheelchair-bound patients, and bedside examinations.

Below is a quick step-by-step process on how to take high-quality smartphone fundus photographs.1

The role of fundus photography in eyecare

A choroidal nevus is a melanocytic lesion of the choroid which varies in size and pigmentation. They most often appear as a regularly pigmented, flat, dark lesion, but choroidal nevi may mimic other pigmented retinal lesions, especially if a stereoscopic view is difficult to achieve. Since these lesions are posterior to the RPE they are best visualized with the red channel and will disappear with the green and blue channel. FAF is useful for distinguishing these lesions from melanomas because the presence of lipofuscin is more closely associated to the latter. Fundus photography and software annotations can be used to determine if a choroidal nevus has grown in size, which is another risk factor for melanoma.

Photodocumentation of chorioretinal scars is useful in helping to determine if there is any reactivation of lesions between dilated fundus exams. Since chorioretinal scars tend to be very irregular, it is often difficult to fully describe them in words. In these cases, photographic documentation ensures that a proper baseline is attached to the patient’s record and future examinations are more accurate.

FAF has twofold importance in these cases:

Figure 6, below, reveals a chorioretinal scar in the left eye with true color imaging which is easily evident with funduscopy as well. FAF reveals a small lesion in the right eye which was not picked up by funduscopy or noted on the color image.

Central serous chorioretinopathy (CSCR), also known as central serous retinopathy, is a relatively common, and often self-limiting, chorioretinopathy characterized by fluid accumulation underneath the retina or RPE. Though the pathogenesis is still unclear, steroid use and prolonged emotional stress have been implicated. Recent multimodal imaging studies have revealed a thickened and hyper-permeable choroid; these studies suggest that CSCR is part of a category of retinochoroidopathies dubbed Pachychoroid Spectrum Disorders.2 Resolved CSCR often results in lingering pigmentary disturbances and visual distortion which are better visualized with FAF.

Figure 7: A patient with resolved CSCR. To the left, true color imaging reveals mild pigmentary changes along the inferior arcades and myelinated retinal nerve fiber layer (incidental finding) superior to the optic nerve head. To the right, FAF reveals the true extent of the pigmentary disturbances.

Diabetic retinopathy screenings are becoming more common due to the increasing prevalence of diabetes worldwide. For many patients, no ocular treatment is necessary, but it is important to properly stratify the risk of progression to prevent the development of the sight-threatening disease. Funduscopy is the main tool used to evaluate patients for diabetic retinopathy, but fundus photography can be a great adjunct in the management of these patients.

A picture is worth a thousand words, and this is most evident when educating patients on strict blood pressure and glucose control to decrease their chances of developing sight-threatening diabetic retinopathy. Patients tend to follow treatment protocols when they better understand their medical condition, and showing patients “the bleeding and swelling” in their eyes can often do wonders for patient adherence.

Whether you have fundus photos available or not, make sure you’re comfortable and confident explaining eye conditions caused by diabetes to your patients.

These findings are even more impressive considering that ultra-widefield imaging was performed more quickly than standard photography and without the need for dilation. Recent investigations on the use of ultra-widefield imaging in diabetic retinopathy have shown that the presence of peripheral diabetic retinopathy is associated with a 4.7-fold increased risk of progression to PDR and a 3.2-fold increased risk of progression in diabetic severity by at least 2 levels.4 A surprising result to come out of this study is that 51% of all patients had diabetic retinopathy lesions that were predominantly peripheral. 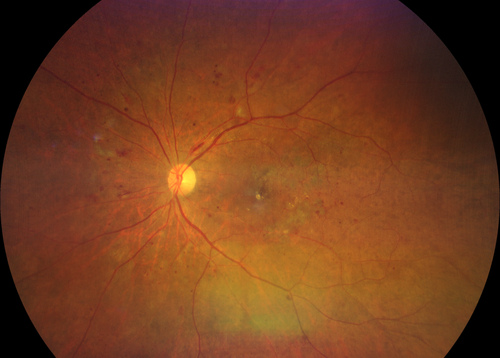 The detection of age-related macular degeneration (AMD) is often straightforward and can be completed with ophthalmoscopy alone, but the management of lifestyle risk factors can be significantly harder. Similar to diabetic retinopathy, showing patients their drusen or geographic atrophy can improve patient efforts of diet modification, smoking cessation, and adherence to ocular supplementation when necessary.

Drusen and geographic atrophy have a variable FAF pattern depending on size and amount of RPE atrophy. As with chorioretinal scars, hyper-autofluorescence has been associated with a stressed RPE and accelerated progression. 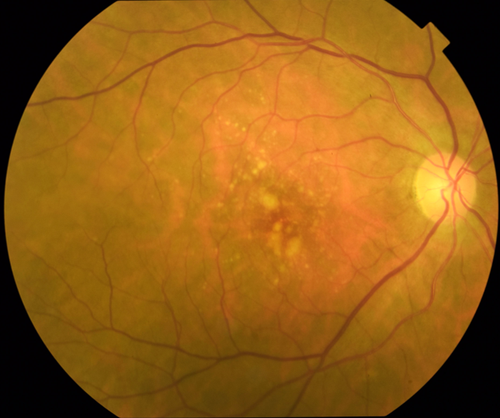 The diagnostic care of glaucoma has been largely supplanted by OCT and perimetry, but fundus photography still plays an important role in glaucoma management. Its primary role lies in the examination of the optic nerve head and retinal nerve fiber layer as this remains an important part of the evaluation of a glaucoma patient or suspect. For this reason, it is important to have a reliable baseline for future comparisons. Secondarily, the detection of disc hemorrhages has been shown to be more accurate with fundus photography than with clinical examination. In the Ocular Hypertension Treatment Study, five times as many disc hemorrhages were detected with fundus photography than with clinical examination.5 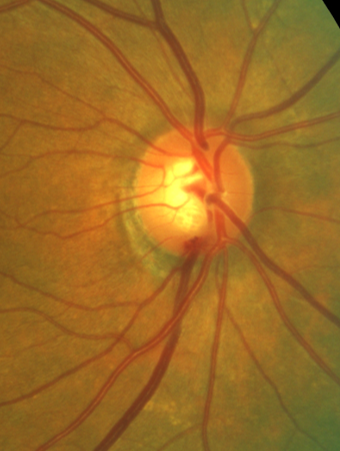 Figure 10: A small disc hemorrhage is noted at the inferior rim, correlating to inferior rim thinning.

When medically necessary, fundus photography can be billed using the code 92250. Medical necessity implies that there is a medical problem that requires documentation and that fundus photography will be used in the management of this condition.

The national Medicare average for a code 92250 reimbursement in 2019 is $51.54. Unfortunately, there is no additional reimbursement for FAF or ultra-widefield imaging. Proper documentation of this code requires that the fundus photograph be attached to the patient’s chart and a separate interpretation and report be written. It is not enough to simply comment on the photograph with the assessment and plan.

Fundus photography, though an older technology, is still a vital component of any ophthalmic practice. Detection and documentation of posterior segment structures is crucial in disease management and often provides complementary data to OCT and perimetry. More advanced iterations of fundus photography such as FAF and ultra-widefield further increase the utility of this technology, ensuring that fundus photography is here to stay for years to come.

Dr. Daniel Epshtein is an assistant professor in the ophthalmology department of Mount Sinai Morningside in New York City. Previously, he held a position in a high-volume multispecialty ophthalmology practice where he supervised fourth-year optometry students as an adjunct assistant …