Cystic Spaces Without the Edema: Clinical Cases in Optometry

This clinical case focuses on a diagnosis of macular telangiectasia type 2. Learn what to look for and other pertinent research on this condition! 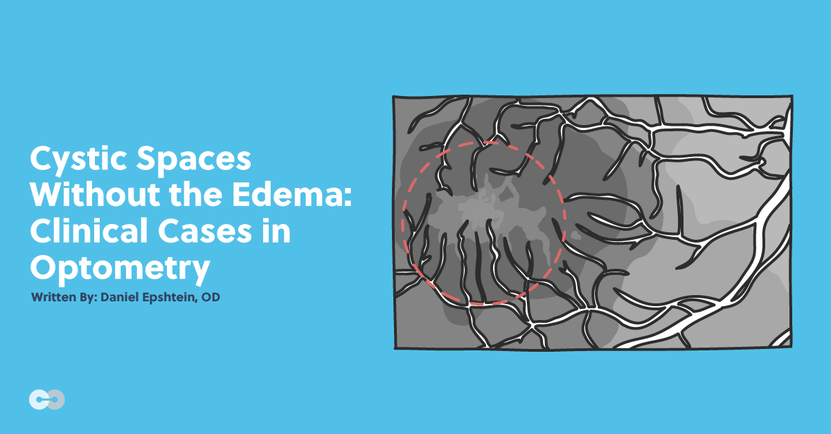 A 67 year old Indian female presented complaining of increasing difficulty reading at near, worsening during the past 2 years. Her previous examination was 3 years ago with an outside provider who had performed cataract surgery in both eyes. She reported that the cataract surgery significantly improved the vision but then her vision continued to worsen, although it was still considerably better than presurgical levels. She had been diagnosed with hypertension (last blood pressure 138/78 mmHg) and type 2 diabetes (last HbA1C 6.4%) 6 years prior. Both were well controlled with lisinopril and metformin, respectively.

OCT imaging of the macula was ordered to assess the pigmentary changes. Small inner retinal ovoid hypo-reflective spaces were noted in each fovea. The cavitations were more prominent on the temporal side of the fovea and were not associated with retinal thickening. Mild disruptions of the retinal pigment epithelium and ellipsoid zone corresponded to the pigmentary changes noted with funduscopy.

A fluorescein angiogram was performed to assess the retinal vasculature. Mild diffuse hyperfluorescence, mostly confined to the temporal macula, was noted in each eye. The retinal cystic-like cavitations, noted on OCT, did not show any fluorescein pooling with angiography.

The main diagnosis considered in this case was macular telangiectasia type 2 due to the characteristic inner retinal cavitations noted on OCT. Because the patient was diabetic, diabetic macular edema was considered in the differential; however, unlike retinal cysts associated with diabetic macular edema, there was no noted retinal thickening, hemorrhaging, or hard exudates. The fluorescein angiogram confirmed the diagnosis when no significant angiographic signs outside the macula were noted. Other disorders such as branch/central retinal vein occlusions and age related macular degeneration were considered but ultimately ruled out due to the lack of corresponding clinical and imaging findings.

The patient was apprised of all findings and the slowly progressive nature of the disease was discussed in length. The patient was educated on the use of an Amsler grid to self-evaluate her vision and a four-month re-evaluation was scheduled.

Macular telangiectasia type 2 is a primary neurodegenerative maculopathy characterized by bilateral atrophy and subsequent vasculopathy most prominent in the temporal macula. The average age of diagnosis is 57 years old and even though the disease is slowly progressive, most patients will retain good vision in the 20/32-20/50 range.1 Due to the paracentral changes and resultant scotomas, reading ability seems to be affected out of proportion to visual acuity testing. The primary cause of macular telangiectasia type 2 is still unknown, but Muller cell dysfunction is considered to be an early pathological finding.

Early funduscopic changes include blunting of the foveal reflex, reduced retinal transparency (retinal graying), and blunted or right-angle venules. As the disease progresses, vascular telangiectasias, crystalline deposits, retinal pigment hyperplasia, and retinal atrophy will develop. Rarely, retinal neovascularization or foveal pseudo-vitelliform lesions may form. Before these clinical findings manifest, temporal diffuse fluorescein angiography hyper-fluorescence and temporal macular pigment loss may be noted. OCT imaging reveals distinctive inner retinal cavitations, outer retinal disorganization, and macular thinning (in nonproliferative cases). Aside from the loss of the foveal reflex, these findings are usually more prominent on the temporal side of the macula but often encompass the whole fovea as the disease progresses.

Macular telangiectasia type 2 is a difficult disease to diagnose clinically, especially in its earlier stages. Checking for characteristic OCT findings and ruling out common conditions such as age related macular degeneration and diabetic macular edema can help establish the correct diagnosis. Though there is no accepted treatment for the nonproliferative form of macular telangiectasia type 2, patients must be counseled on self-assessing their vision to prevent profound vision loss from the treatable, proliferative form.

Dr. Daniel Epshtein is an assistant professor in the ophthalmology department of Mount Sinai Morningside in New York City. Previously, he held a position in a high-volume multispecialty ophthalmology practice where he supervised fourth-year optometry students as an adjunct assistant …