This article highlights the most common conditions practitioners will encounter in practice and how optical coherence tomography can aid in management. 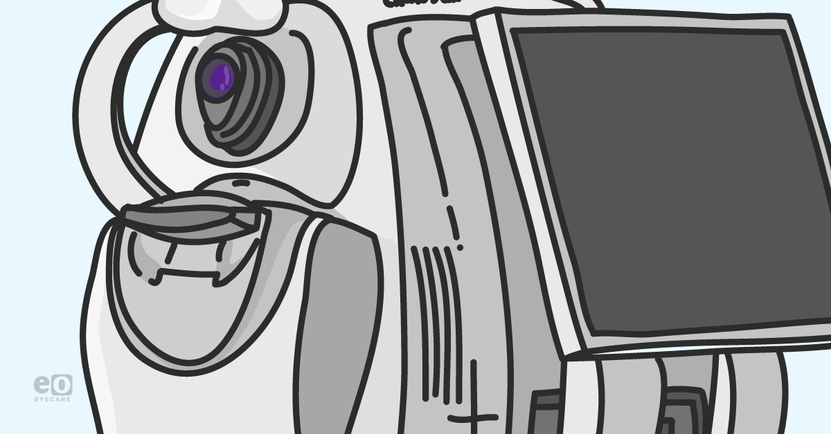 There is no question that optical coherence tomography (OCT) has revolutionized how optometrists and ophthalmologists examine the eye.

OCT has become indispensable for the medical eye care practitioner. Whether it is helping to localize a retinal lesion to a certain retinal layer, or finding retinal nerve fiber layer defects, OCT is as important to medical eyecare as the phoropter is to refraction. Though OCT cannot replace a dilated fundus exam and a keen eye and mind, it has significantly eased the clinician’s burden in differentiating ocular pathology.

Large changes in the index of refraction, such as between the vitreous and the retina, will lead to a very distinct demarcation on OCT. Optically homogeneous structures (which reflect little light) will be relatively dark (such as the vitreous) whereas optically heterogeneous structures (which reflect a lot of light) will be relatively bright (such as the retinal nerve fiber layer).1

When looking at an OCT image of the macula, we often forget that we are not looking at a true image due to the near histologic resolution that modern day OCTs are able to achieve.

As we examine the following OCT images, keep in mind that we are not viewing retinal tissue as it truly is, but as the machine interprets it. It is always helpful to keep a copy of a normal OCT image when examining pathology or to explain pathology to patients.

For this article, all images will be presented in grayscale as I have found it easier to discern the various layers and to spot pathology in grayscale than it is with color images.

The Zeiss Cirrus is a full capability OCT which can image the cornea, iridocorneal angle, retina and optic nerve. Images of the retina can be performed with different types of scans varying in orientation and resolution.

The 512 x 128 Macular Cube Scan is the workhorse of retinal imaging. It allows for a broad scan of the whole macula. Numerous post-scan analyses such as Macular Thickness Map, Guided Progression Analysis, and RPE Segmentation Map can be performed to aid in the diagnosis and management of retinal disease.  The numerous HD and Raster scans provide higher resolution scans which can pick up minute changes in retinal architecture.

The Zeiss Cirrus Photo combines all these imaging modalities with a high-quality fundus camera. The correlated images allow for quick and easy distinction of retinal lesions. All the following images except for the Normal Retinal OCT were completed with the Zeiss Cirrus HD-OCT during routine clinic evaluation using the 512 x 128 Macular Cube Scan; the Normal Retinal OCT image was captured with a 5 Line Raster Scan.

Want more content dedicated to ocular disease? Check out our medical optometry resource page for tons of clinical cases and images and information on using OCT and ultra-widefield imaging.

This OCT image is the right eye of a healthy 27-year-old male’s right eye.

Eighteen anatomic landmarks can be visualized here. These landmarks have recently been standardized by the International Nomenclature for Optical Coherence Tomography Panel which is staffed by several of the world’s leading OCT experts.2

There is a stark change in the index of refraction between the optically empty vitreous and the highly
reflective internal limiting membrane (ILM). The retinal nerve fiber layer (RNFL) is thin on the temporal side of the fovea and thick on the nasal side, corresponding to the papillomacular bundle.

Often the posterior cortical vitreous can be seen just barely attached to the macula or floating above it in the case of a complete posterior vitreous detachment.

The ganglion cell layer is significantly less reflective than the RNFL and appears as the darker layer below it. The inner and outer plexiform layers are made up of cell layer connections which are optically irregular leading to higher reflectivity and lighter layers in the image. The inner and outer nuclear layers are composed of densely organized nuclei which are minimally reflective and thus show up as relatively dark layers. The external limiting membrane (ELM) shows up as the first of several thin bands in the outer retina.

The integrity of the EZ often correlates to potential retinal acuity. What was once referred to as the RPE or RPE/Bruch’s Complex has now been renamed the interdigitation zone and the RPE/Bruch’s Complex. Under high-resolution conditions, these two layers will show up as two distinct highly reflective bands but under lower resolution conditions can meld into one thicker highly reflective band.

Going forward, I will refer to the interdigitation zone and RPE/Bruch’s Complex simply as the RPE (as there is little clinical value for basic clinical interpretation).

The choroid is visualized posteriorly as three layers, the choriocapillaris, Sattler’s Layer, and Haller’s Layer. These layers may be hard to distinguish with a poorer resolution OCT image. The choroidal-scleral junction is the outer limit of the decipherable OCT layers. The sclera is imaged as the large, homogeneous, outermost structure where little detail is noted.

Vitreomacular traction (VMT) is a relatively common vitreoretinal disorder that is often the product of normal vitreal liquefaction and vitreous cortex separation.4

In the majority of cases, this normal age-related process will culminate in subjective floaters and the presence of a Weiss ring upon dilated fundus exam. 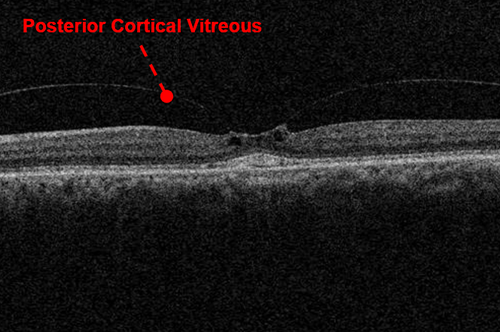 In a minority of cases, the separation of the posterior cortical vitreous from the internal limiting membrane will be incomplete leading to VMT. Ophthalmoscopically, VMT might be difficult to discern but can seen as loss or distortion of the foveal reflex.

The classification of VMT, as visualized by OCT, is broken down by size into focal (≤1500µm) or broad (≥1500µm) and whether it is isolated or if concurrent macular pathology is present.4 VMT causes disruption of the macular architecture in the form of foveal distortion, elevation, schisis, edema, or pseudocyst formation.4

In contrast, vitreomacular adhesion which is a nonpathological entity represents the normal adherence of the vitreous to the retina and not associated with retinal disruption. VMT often spontaneously resolves but may progress into a lamellar or full thickness macular hole.4

All macular holes (full thickness, lamellar, pseudo) are ophthalmoscopically similar, appearing as ovoid or round reddish lesions in fundus photography.

A full thickness macular hole is by definition “an anatomical defect in the fovea featuring interruption of all neural retinal layers from the ILM to the RPE.”4

The edges of the hole are typically rounded and pulled anteriorly, often containing intraretinal cavitations. Within the defect, there is often relative hyperreflectance (increased brightness) of the RPE due to the increased incidence of light. In contrast to the full thickness defect, a lamellar hole is often visualized as an irregular foveal contour without outer retina layer disruption.4

Although a macular psuedohole is funduscopically similar to a full thickness and lamellar macular hole, a macular pseudohole has no retinal tissue loss.4 often there is mild to moderate retinal thickening corresponding to epiretinal membrane contracture.

A macular pseudohole will always be associated with a perifoveal epiretinal membrane.7  Either a Macular Cube Scan, or Raster scan is critical in differentiating these three lesions and any comorbid vitreomacular interactions.

An epiretinal membrane is another common vitreoretinal disorder that is easily identified with OCT.

An ERM is caused by fibrous proliferation along the ILM made up of many cell types including glial cells, RPE cells, and inflammatory cells.5

An ERM is seen in fundus photography as a white to yellow irregular reflective tissue overlying the retina. It is theorized that a common etiology of ERM formation is the proliferation of vitreal remnants on the retinal surface.4,5

Clinically, it is very common to note the presence of a Weiss ring with an ERM and autopsy studies have found that 50% of eyes examined had remaining vitreal tissue along the retinal surface after a complete PVD.4  Simple ERMs, which are often relatively stationary, without significant contraction will lead to minimal retinal distortion and only mild subjective symptoms.

Complex ERMs that have significant contracture can lead to macular pseudohole formation, vascular distortion, edema, and retinal detachment resulting in significant visual disturbances.5 With OCT, an ERM is visualized as a thin diffuse hyperreflective irregularity on the retinal surface. OCT findings will vary considerably with the size of the ERM and amount of traction. As the ERM grows and contracts, more retinal distortion is noted which can lead to cystic formation. OCT is essential in the management of ERMs to assess early changes which can result in significant vision loss if left untreated.

Fluid accumulation is most common within the outer plexiform layer but as more fluid accumulates extension into the inner retina is noted.8 Depending on the associated condition, macular edema is precipitated by vascular damage, ischemia, and/or inflammation leading to blood-retinal barrier breakdown and impaired fluid filtration and removal.8 Due to this complex interplay, macular edema treatment varies greatly and includes Anti-VEGF therapy, steroidal therapy, carbonic anhydrase inhibitors, and laser photocoagulation.

The Zeiss Cirrus software allows for reproducible measurements of retinal thickening with a progression analysis which will automatically align images and compare region to region.

Central serous chorioretinopathy (CSCR) [also known as central serous retinopathy] is a relatively common and often self-limiting chorioretinopathy characterized by fluid accumulation underneath the retina or RPE.10  Though the pathogenesis is still unclear, steroid use and prolonged emotional stress have been implicated.11 More recent multimodal imaging studies have revealed a thickened and hyperpermeable choroid as common findings.12 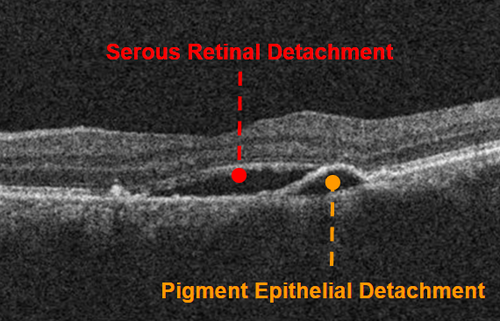 Recently it has been suggested that CSCR is part of a category of retinochoroidopathies dubbed Pachychoroid Spectrum Disorders.12 CSCR is noted as a retinal detachment with or without the presence of a pigment epithelial detachment (PED). PEDs often have an orange hue which can make them difficult to distinguish from RPE changes and lipofuscin deposits. Resolved CSCR often results in lingering pigmentary disturbances and visual distortion. A serous retinal detachment is often visualized with an OCT as a smooth diffuse elevation of the neurosensory retina which is wider than it is taller. The RPE will be noted underneath the pocket of optically blank fluid.  In contrast, a PED is almost always smaller with similar height and width. 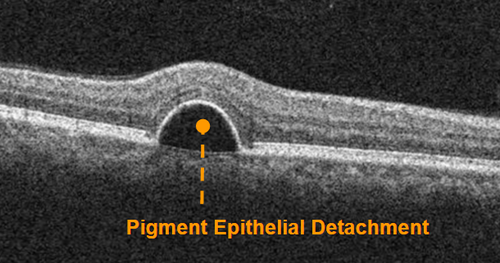 An OCT image might reveal areas of RPE atrophy and PED outside the funduscopically noted area of disease which is more consistent with a multifocal or chronic CSCR. In some cases, a PED without a neurosensory detachment might be noted. These PEDs sometimes resolve but can be stationary over years. Solitary PEDs might be thought of as an aborted CSCR but in my opinion are likely a finding somewhere on the pachychoroid disorder spectrum. OCT is vital in determining whether a patient can be monitored by me for a relatively benign case of CSCR or needs to be referred to a retinal specialist to rule out a malicious entity that needs immediate treatment.

Funduscopically, white spots and dots are often difficult to localize to a certain retinal layer confounding the diagnosis. Hard exudates, cotton wool spots, and drusen vary in size, shape, and color which can impede proper diagnosis.