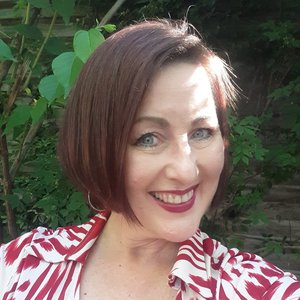 In this report, see what 685 optometrists had to say about the state (and future!) of optometry in 2021. 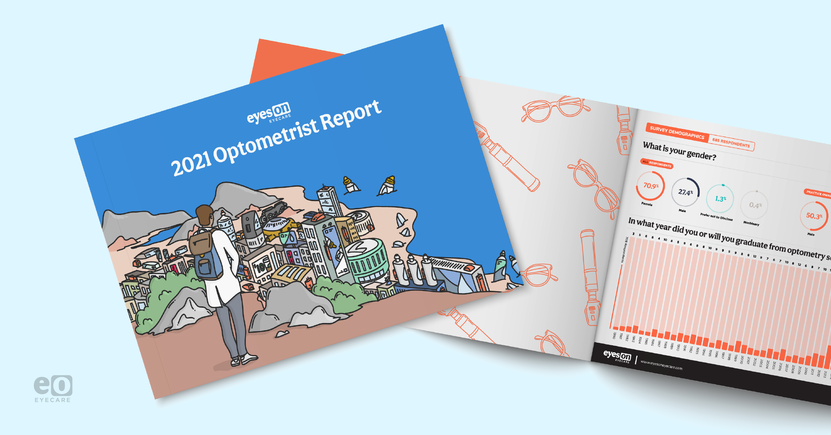 Welcome to the 2021 Optometrist Report, where we publish the results of our survey of hundreds of members of the eyecare industry. Each year, we’re eager to learn what our colleagues have experienced over the past months and gain their insights on the current state of our profession. We knew that 2021, with its unusual circumstances and unique challenges, would offer some of the most interesting and valuable information to date.

Looking back at 2020—with its restricted patient visits and closed optometry practices, both leading to the rise in popularity of telehealth—we wondered how this year would reflect those changes. In last year’s report, 73.6% of survey respondents reported being negatively impacted by COVID-19. How did they fare in 2021? How did the new year and the evolving pandemic change the field of optometry—from optometry salaries to co-management strategies, to optometry settings and beyond?

We polled 708 respondents, including practice owners, practicing optometrists, and students to learn the answers to these questions. We wanted to gauge not only demographics, practice settings, financials, and product preferences but the mindset and satisfaction of today’s ODs—and to share that information with you.

Download the 2021 Optometrist Report or keep reading for a sneak preview of our findings!

In the 2021 Optometrist Report, we cover:

The many faces of the 2021 Optometrist Report

We surveyed 708 members of the eyecare industry. Of these, 512 were employed optometrists, 173 were practice owners, and 23 were optometry students. Out of the overall respondents, 70.9% were female, closely reflecting the ratio of recent optometry graduates.

Some of the more intriguing insights we gained are surrounding salary, residency training, advocacy awareness, the willingness to embrace new technologies, and feelings about the future.

Our report shows optometry advocacy is not at the forefront of most OD’s minds with the majority only giving their attention to advocacy efforts a 5.2 on a scale of 1 to 10. In addition, only 53.1% of respondents report being a member of AOA, as opposed to 64.8% in 2020. It was also revealed that newer optometrists are less likely to pay attention to advocacy efforts in optometry than their more experienced counterparts.

Bringing in the big bucks: Optometry salaries in 2021

Last year, the median salary among practicing optometrists was $113,396, but it rose this year to a whopping $132,524. We’re delighted to see that the 65% of 2020 ODs who expected their salaries to grow were proven correct!

Between 2020 and 2021, salary satisfaction has essentially remained the same, with both practice owners and employed ODs reporting the same level of satisfaction. Slightly over 70% of respondents expect their salary to increase in the coming year, and new graduate starting salaries have mostly been on a steady rise since 2002. 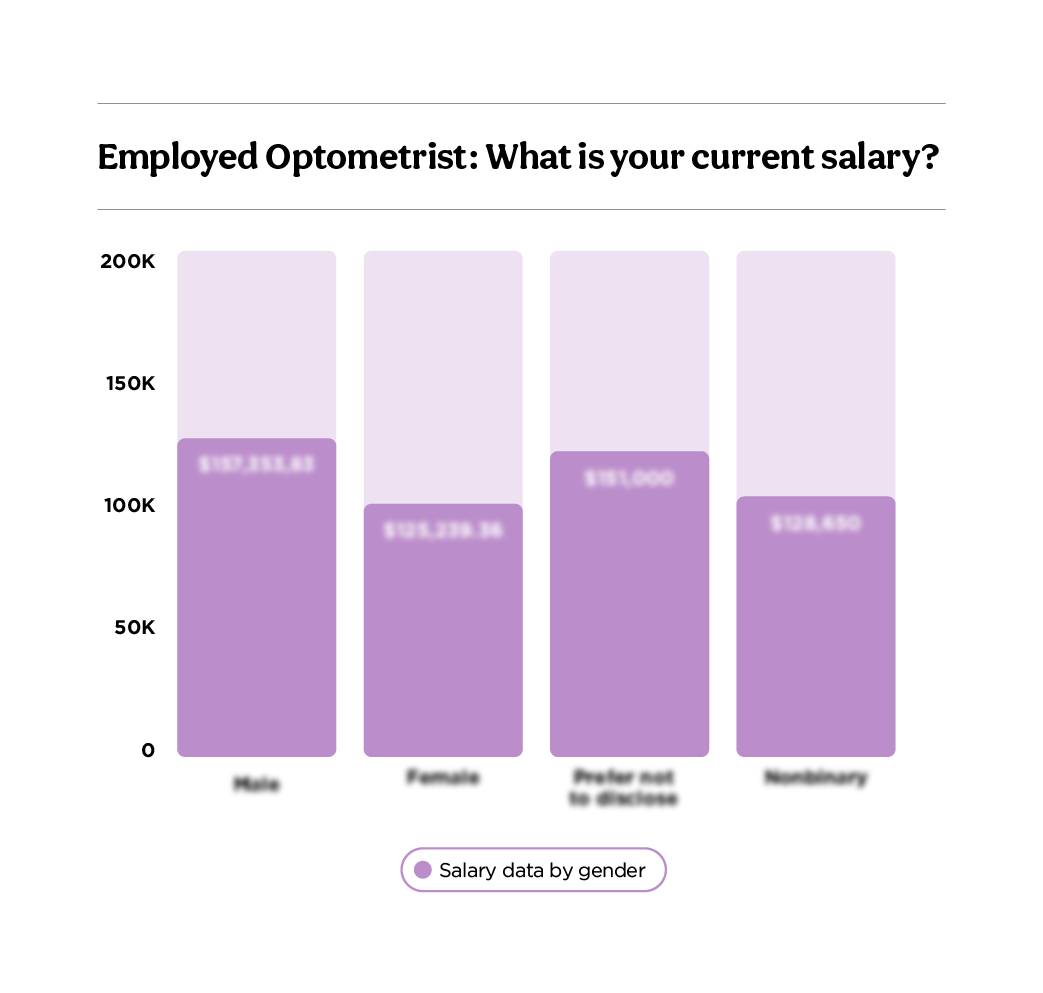 Perhaps most interesting is the difference in average salary by gender. On average, male optometrists earn almost $32,000 more than their female counterparts, a discrepancy reflected in the salaries of practice owners as well as employed ODs.

When it comes to education, receiving residency training does not equate to a higher salary among employed ODs. In fact, practice owners with residency training reported earning approximately $25,000 less. However, out of those optometrists who did pursue residency, 96.3% deemed their training well worth it. 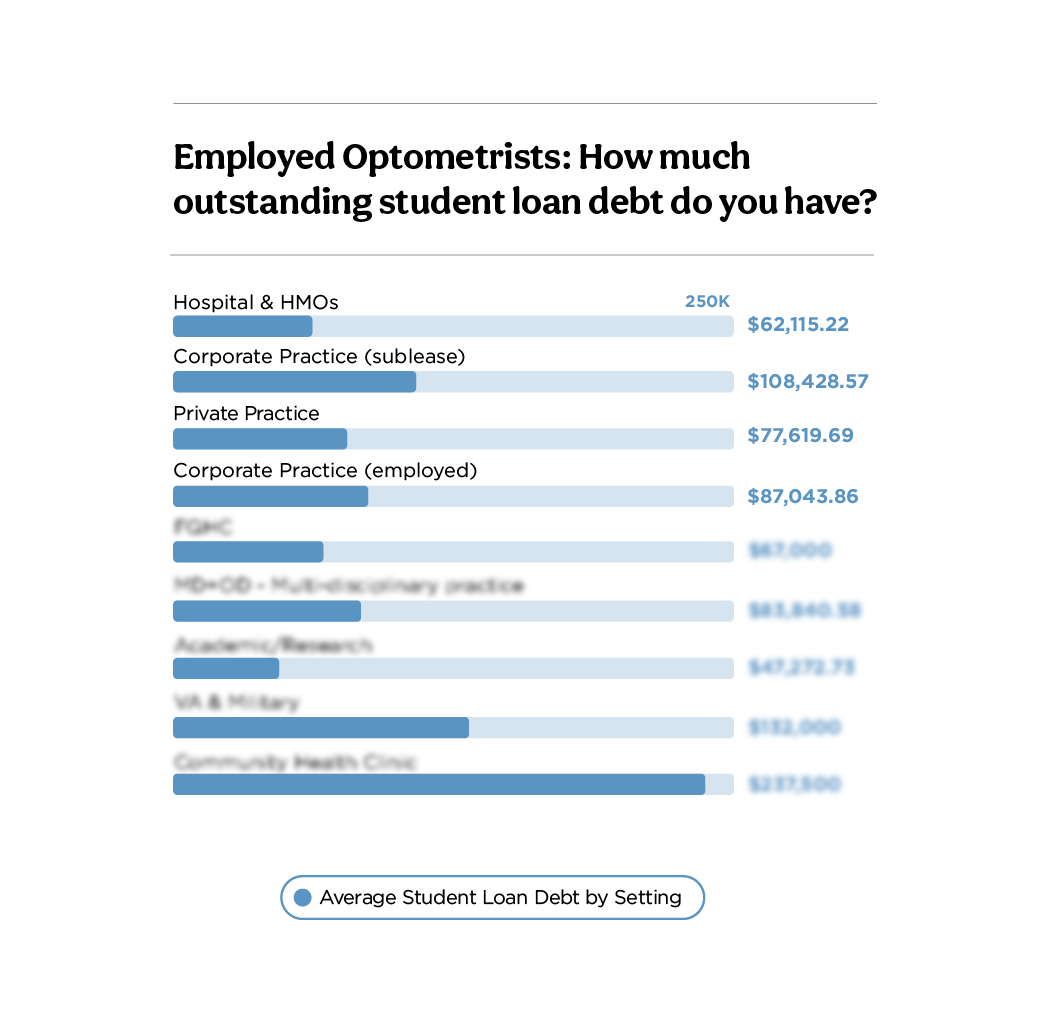 When it comes to student loan debt, optometrists’ average confidence in their ability to pay back their loans increased by over 27% from last year. Average student loan debt simultaneously decreased almost 24%, from $127,943 to $96,943. We’re hoping this means that optometrists are taking advantage of the many financial strategies available to consolidate and pay off their student loan debt!

Innovation in optometry practice in 2021

On the topic of technology, of the 685 practicing optometrists polled, 349 considered themselves average when it came to the adoption of newly released innovations in eyecare. In line with this, approximately half plan to bring in a new modality of care for practice this year. Some of the innovations that respondents are most looking forward to in 2022 and beyond are presbyopia eye drops, means for earlier detection of glaucoma and AMD, and a broader implementation of surgical technologies, such as SLT as first-line treatment for GLC and more minimally invasive refractive error repair techniques. 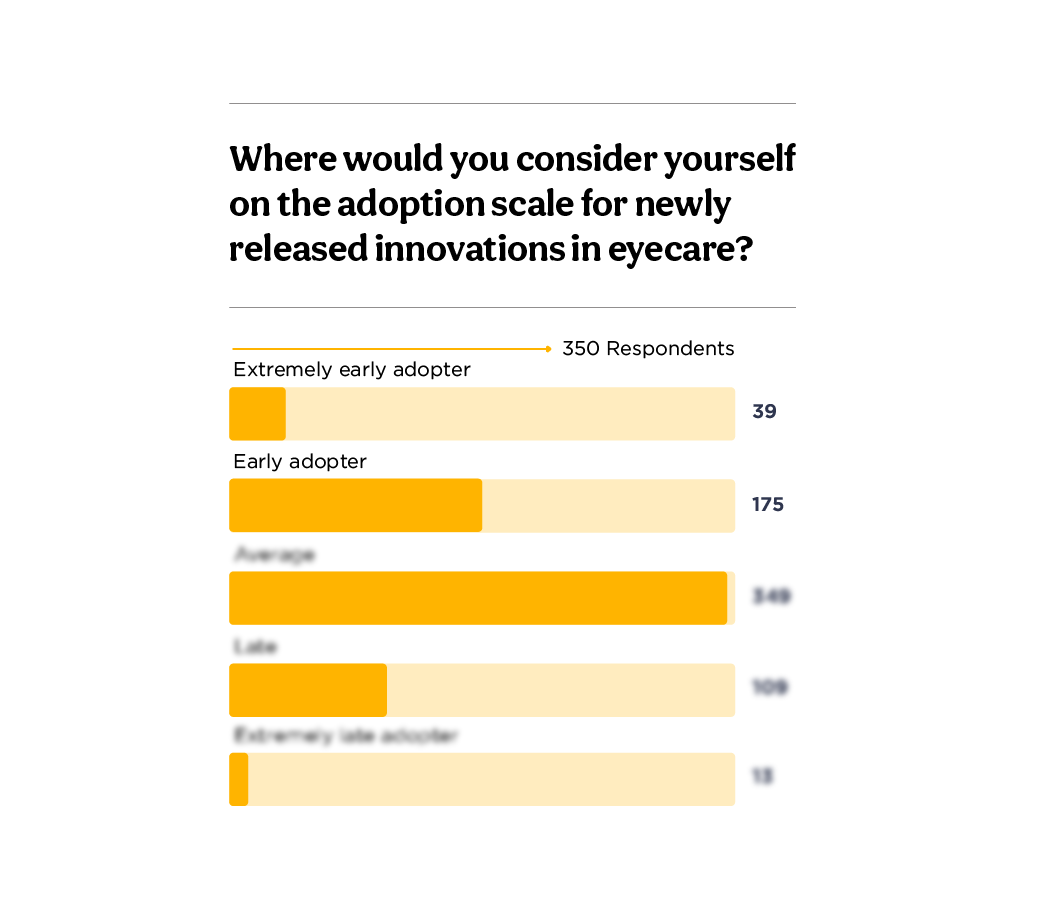 As for the future of optometry, despite their optimism in other areas, respondents were less optimistic than last year. When asked if they would choose the field of optometry again, an average of 72% said yes. For those who would consider another career choice, issues such as high student loan debt, the stress of competing with online glasses sales, the push to see more and more patients per hour, and inter-professional tensions with other healthcare fields would weigh heavily in their decision.

Calling all optometrist changemakers, innovators, and visionaries! If you're inspired to elevate the future of optometry, you could win up to $20,000 in our first-ever Eyes On Eyecare® Optometry Innovation Awards. Learn more >>

Though the stress of the past two years is definitely evident in the responses, in the end, we realized optometrists are resilient, adaptable, and somewhat optimistic, especially as to opportunities in dry eye disease and myopia management. Practice owners are focused on growing their businesses and adding new associate optometrists. New pharmaceuticals promise new treatment options and improved technologies—such as instruments that combine multiple tests, advanced imaging, at-home monitoring, and AI—are destined to enhance diagnostic capabilities and workflow efficiency.

As the world continues to evolve into its new normal, so will optometry practice—and optometrists, as well.

To the tens of thousands of individuals who will ultimately download this report, we hope you find this data valuable and find ways to use it to positively impact your practice and your patients.

To see how we came to these conclusions, download the 2021 Optometrist Report now!

Eleanor Gold is the Managing Editor at Eyes On Eyecare. She is passionate about science communication and education (particularly in the field of eyecare!), holds a PhD in English from the University at Buffalo, and in her spare time enjoys …

Donna Ison is the Associate Editor of Eyes on Eyecare. Formerly, she served as editor-in-chief of MD-Update magazine, managing editor of skirt! Magazine Lexington, and a content/copy editor with BobVila.com. She is performance poet, playwright, and the author of two …