Why the Functional Movement Screen is a Must for Rehab Clinics 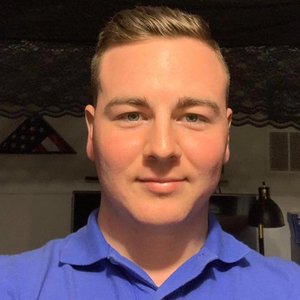 I remember my first year in the Navy as a military police officer. We had just been trained in tactics, protocols, and procedures for enforcing military law and handling suspects. Our police force in Sasebo, Japan was a tight knit precinct with its own language and “call signs” for different situations. 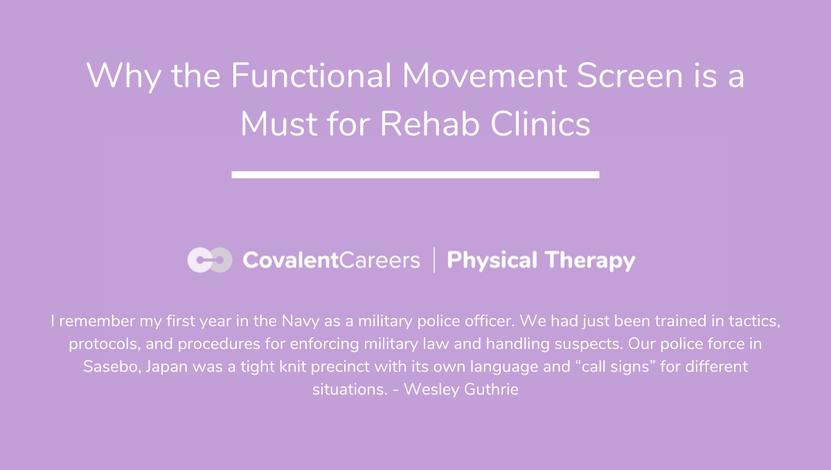 I remember my first year in the Navy as a military police officer. We had just been trained in tactics, protocols, and procedures for enforcing military law and handling suspects. Our police force in Sasebo, Japan was a tight knit precinct with its own language and “call signs” for different situations.

As professional as our communication over the radio sounded, when the rubber met the road and we responded to fires, earthquakes, and bomb threats with the base fire department and Japanese security forces (JPS) there was a lot of “language” confusion at every scene. The communication between us, fire, and JPS was so confusing that the people we were trying to help at the scene were confused!

Why do I say this? Communication and a common language between us, fire, and JPS worked against our common goal of putting out fires, setting the scene, and keeping people safe.

“Could we say the same for healthcare?”

Is there a common language that Athletic Trainers, Physical Therapists, Chiropractors, and Strength and Conditioning professionals could use in assessment, management of injury, and performance when it comes to movement?

We may have found a solution in the Functional Movement Screen. 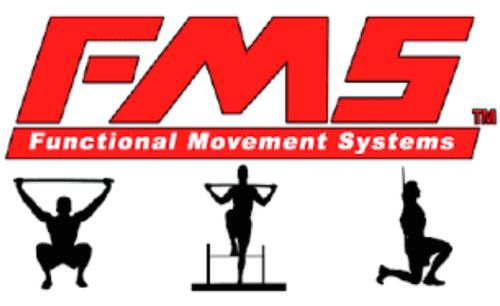 Last weekend I went to a conference in Nashville, TN to learn about the Functional Movement Screen or ‘FMS’ for short. The FMS is designed to assess movement patterns in active individuals to help make better clinical decisions about performance, rehabilitation, fitness, and the management of injury.

What is the FMS?

The FMS was founded in 2001 by Gray Cook, who authored the book “Movement”. Gray wanted to create a system that spoke the language of all professionals who are working in healthcare, fitness, and performance to identify movement dysfunction, support better clinical decision making, and create better communication between the professions.

What began as the Selective Functional Movement Assessment (SFMA), for patients in pain, was later developed into a screening system that allowed active individuals, with or without pain, to set a baseline for fundamental movement. Hence, the FMS was born.

The FMS screen begins with assessing 7 movement patterns along with 3 clearing tests for pain: 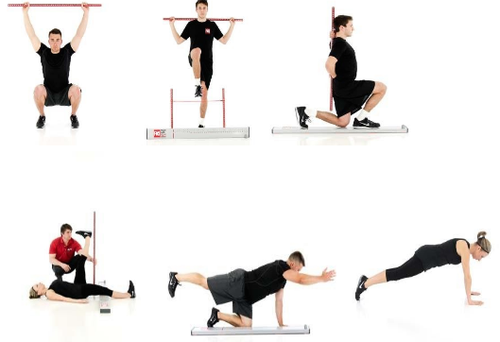 The movement screen is scored on a 0-3 basis.

Why Use the FMS?

First, the FMS is a powerful tool for early detection and injury prevention. Just like a first responder, healthcare clinicians begin their work, after the fact, when an injury has already occurred, and the damage has been done. The FMS provides an early detection system that is designed to not only locate dysfunction and asymmetries, but most importantly, detect pain early and refer that person to the right healthcare professional for evaluation.

The second reason to learn and use the FMS is the main principles guiding functional rehabilitation and programming. For example, one of the most important principles I learned at the FMS conference was..

According to the FMS hierarchy, you first protect. If you screen a client or patient and find dysfunction, asymmetry, or pain, you protect that person from further injury by removing the exercises or training that may be harming that client in what Gray calls “removing the negative”.

This principle reminds the clinician or trainer that you don’t want to add “movement to dysfunction” that might further provocate pain or a future potential injury. For example, if a client scores a 1/1 out of 3/3 on the shoulder mobility test (SM), and has a (+) test for pain in the shoulder clearing test; we know that pain in a clearing test is an immediate referral for further evaluation before we even begin to touch programming. What if the client still scores a 1/1 on the SM test and there is no pain for referral? What do you do then?

“You still protect and remove the negative.”

A 1/1 is still dysfunctional even though the right and left shoulders are symmetrical. Removing the negative is removing any exercises that may lead to further dysfunction or pain.

Next, you correct and then develop. That is the end of the FMS Level I. You screen, protect, and maybe refer. FMS Level II is all about correcting and developing. FMS Level II uses a system for movement correction called the “Corrective Strategy Algorithm”. 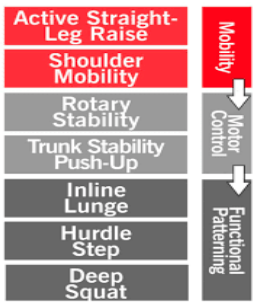 The strategy begins by working on mobility first, motor control second, and then functional patterning third, but most importantly, you find and correct the “weak link” from the FMS.

From there we move to the third principle: develop. You correct then develop the ‘weak link’ pattern through the FMS training Cycle:

The FMS screen is a top-tier clinical tool in injury prevention and early detection in functional rehabilitation. This could be a great option as a standardized baseline at a rehab clinic, as a complement to a pre-participation screening before a sports team pre-season, to even identifying movement dysfunction in fire houses, police precincts, and military personnel.

Wesley Guthrie is a pre-physical therapy student blogger and Navy veteran from Nashville, TN. He writes about current physical therapy shifts in healthcare, personal training trends, reducing student debt, and about his military experience abroad in Japan. In addition, he assists current healthcare clinicians who want to stand out in editing or processing documents, books, blogs, and articles. 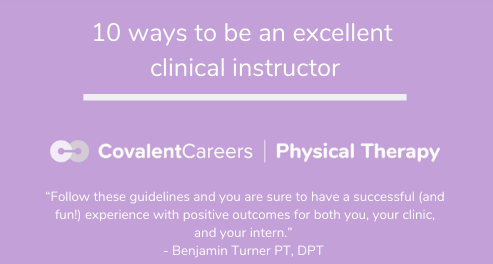 10 Ways to be an Excellent Clinical Instructor

I Took The Wrong Physical Therapy Job: What I learned